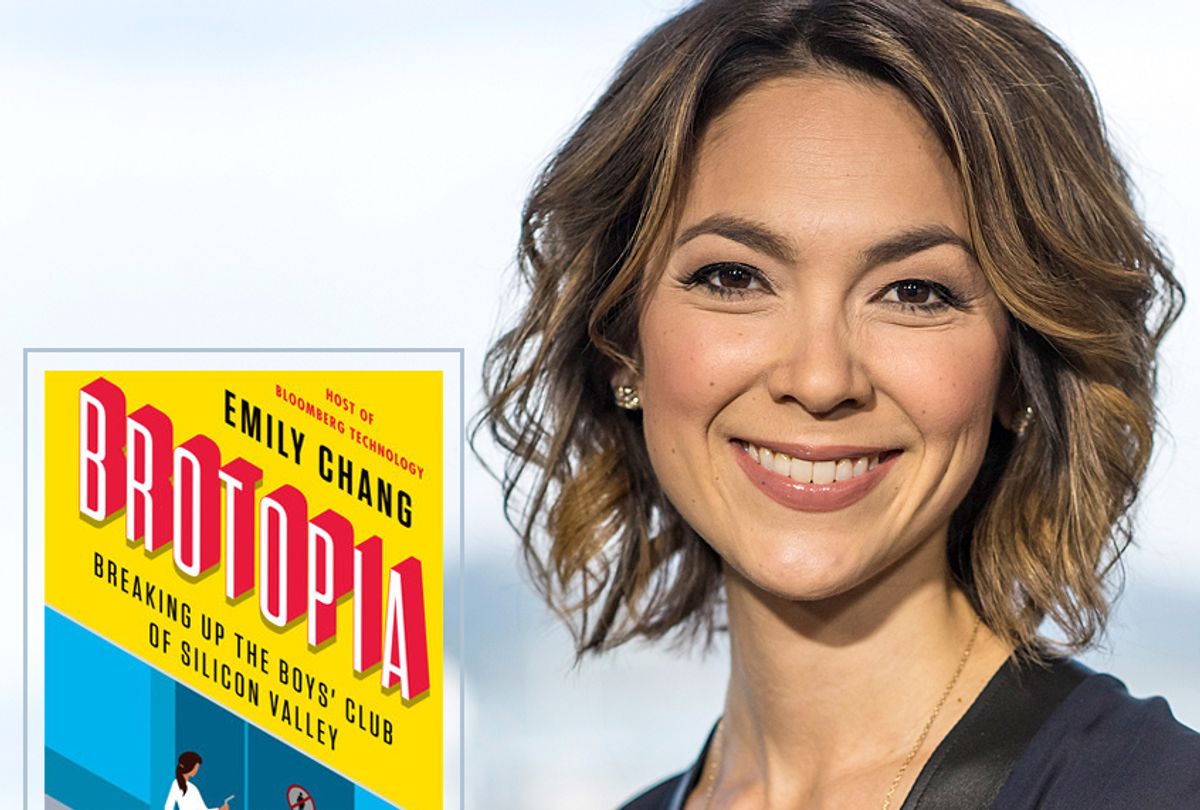 Silicon Valley has a reputation for being male-dominated, even hostile to women. Yet one wonders if the industry would be where it is today — wounded by sexist reckonings and privacy breaches — if women had been at the helm of the big tech companies instead of men. I’m not the only one asking these questions: Emily Chang, anchor and executive producer for Bloomberg Technology, grabbed my attention with an unsettling article in Vanity Fair, titled “'Oh my god, this is so f--ed up': Inside Silicon Valley’s secretive, orgiastic dark side." (That article was itself adapted from her book “Brotopia,” published in February.) In it, Chang describes regularly scheduled drug-fueled sex parties for the Valley’s elite, parties in which women often serve as window dressing.

Indeed, this is partly what Chang's book is about: imbalance of power, how much harder it is for female entrepreneurs to succeed, and why the future of the Valley depends on the industry’s willingness to unabashedly let women lead. It’s also less about the why, and more about the how; it turns out that Silicon Valley’s male-dominated state originated long before the Web 2.0 days.

In our interview, Chang talked about #MeToo, Peter Thiel, and what happens when good intentions to “change the world” aren’t good enough.

In “Brotopia,” you explain how women were pushed out of the tech industry from its early days. Though we can’t go back in time, have you ever wondered how the tech industry might be different today if that weren't the case?

I think it is fascinating to think about how the world would be different if women had been present at the founding of so many of these companies or had gotten a chance to start the next Facebook or Google or Apple. I think because the companies that exist today have created such incredible wealth, and incredible innovation, that we just assume that this is the best way it could possibly be, and it's hard to imagine how the world might be different.

I interviewed people like Ev Williams, who is a co-founder of Twitter, who told me he thinks if women had been on the founding team of Twitter, that maybe online harassment and trolling wouldn't be such a problem. Maybe video games wouldn't be so violent. Maybe porn wouldn't be so ubiquitous. There are so many ways that the world could be different if women had been there from the beginning. It's certainly impossible to prove "what if" — we'll never definitively know, but I think about all the women who never got a chance to start the next Facebook or the next Google, or the next Apple, simply because they didn’t look the part.

When people think of tech entrepreneurs, people like Steve Jobs and Bill Gates might spring to mind. Who are some women in the industry who you believe have been underrepresented in the industry, but are just as important to the tech world?

There are so many women who haven't gotten the respect and recognition that they deserve. Since you mentioned Steve Jobs, I think of Susan Kare, who designed all of the graphical interfaces on the Macintosh and was a key player in making the Mac accessible and interesting to a wider group of users. She's the reason that [people] like my mom bought Apple computers in the ‘80s. It opened up a whole new market for Apple and the technology industry, all because she made computers accessible and understandable to real people.

Another woman I think about is Margaret Hamilton, who is a computer scientist who worked at NASA, and was really important in building the software that brought Apollo to the moon.

Another woman I think about is Diane Greene, who was the founder of VMware, which is an enterprise company that is worth tens of billions of dollars today. She's now running Google Cloud, but she doesn't seek the spotlight. She has an incredible story to tell, but unfortunately it just hasn’t been told enough.

In your book, you talk about Peter Thiel and how his focus on meritocracy during the early PayPal days likely influenced Silicon Valley’s culture today. It’s interesting because I think meritocracy is what draws a lot of talent to Silicon Valley. It creates a foundation where people don’t have to play by the traditional rules, an easier route to success, which has been an appeal for many to startup tech jobs. What, in your opinion, happens when that’s stripped away from the Valley’s culture?

Silicon Valley loves to trumpet the idea that it's a meritocracy where anyone with a good idea can succeed, but the reality is meritocracy is impossible to achieve because we all come to the plate with our own privileges and backgrounds, and at no stage of the game is everyone on a level playing field. The escalator to success is far faster for some than it is for others. I think when you strip away the fantasy that Silicon Valley is a meritocracy, you realize that it in fact has rewarded a lot of people who look the same, and a lot of men who fit the preconceived idea of what a computer programmer or an entrepreneur is supposed to look like.

Investors are looking for people who look like Steve Jobs, or Mark Zuckerberg, or Bill Gates. That shuts out 50 percent of the population if not more. I talked to so many women who were going to pitch meetings, wearing black and gray, with their hair in a ponytail, they don’t wear jewelry, and they don’t get their nails done.

Since we were on the topic of Peter Thiel, I’m curious what your thoughts are about him leaving the Valley?

I think Peter Thiel made a lot of enemies in Silicon Valley when he supported Donald Trump within a week of the Access Hollywood tape being released of the president bragging about groping women without permission. This is a very fact-clinging community. It sounds like Peter has sounded increasingly inhospitable to his more contrarian ideals. Peter Thiel has made some incredible contributions to technology, and he is always pushing the boundaries. However, I don’t think that he's done nearly enough to address the issues of women and underrepresented minorities in tech.

How has Silicon Valley dealt with the #MeToo movement? Has it affected how tech companies handle sexual harassment and assault?

So, my biggest fear of that is this isn’t a movement but a moment and that people, you know, ultimately will just go back to average and tolerate some of the behavior that we’ve been seeing. But my biggest hope is that this really is a movement and I do see some people really working hard to change the status quo.

Do you think the way Silicon Valley “thinks differently” has resulted in lesser consequences for those who have been accused of sexual harassment and assault in the wake of the #MeToo movement (compared to, say, Hollywood)?

It happened in a very short period of time, and so I think that could come without the same sort of social evasion that would happen over the course of a long career. It could lead to arrogance and quite frankly, hypocrisy. There are so many people who truly believe that they are changing the world. It’s been used as a sort of justification or cover for a lot of that behavior to be overlooked, and some people who work here have had a hard time admitting that the industry has really failed women.

If Silicon Valley is really changing the world, they would be doing something about this, and I hope they do. There are some good people out there who are trying really hard and doing some really important work to change the ratio, but we need to see a lot more action and a lot less talk.

Will women finally be able to save the tech industry from suffering from another disastrous bubble burst?

I certainly think they can. I think it is a fascinating idea to look at the dot-com bust and consider what happened there. If women have had more decision-making roles, would that have happened?  I would argue it wouldn’t have happened. Men and women have completely different risk profiles, but in general, when you have people of all different backgrounds and all sort of personalities, that creates balance in an organization. I think having concerting and complementary points of view are really important when you’re building an executive team.

I think it would be a huge benefit to companies today to think about that when they’re building their leadership team. Like, if you look at Facebook, for example, Mark Zuckerberg and Sheryl Sandberg have one of the strongest business partnerships in the world and he made as much space for her in that partnership as she did for him and she not only built an incredible business with Google, she turned Facebook into Google’s biggest competitor in the online ad business. And so, hiring women is not just a right thing to do; it’s the smart thing to do. There’s countless research that shows this but unfortunately some of the data has been overlooked.

Finally, let’s talk about sex and the Valley. Do you think the current climate in the Valley will shift the frivolity and novelty of the infamous tech sex parties you described in your book? Are they a symptom of the Valley or of the San Francisco Bay Area?

The Bay Area has long been a place of sort of sexual exploration and sexual liberation, and that’s been going on for decades, so I don’t think that is going to change. I don’t necessarily think it should. I think that what needs to be examined is how some of these events are just another way to prey on women.

I think too much business in Silicon Valley happens outside the office. Some of these events are much more about power than sex and that is what needs to change.