Sarah Silverman defends Al Franken: "I'm so sad that he got bullied into resigning"

In GQ, the comedian addresses empathy and accusations against her friends Franken, Louis C.K and Aziz Ansari 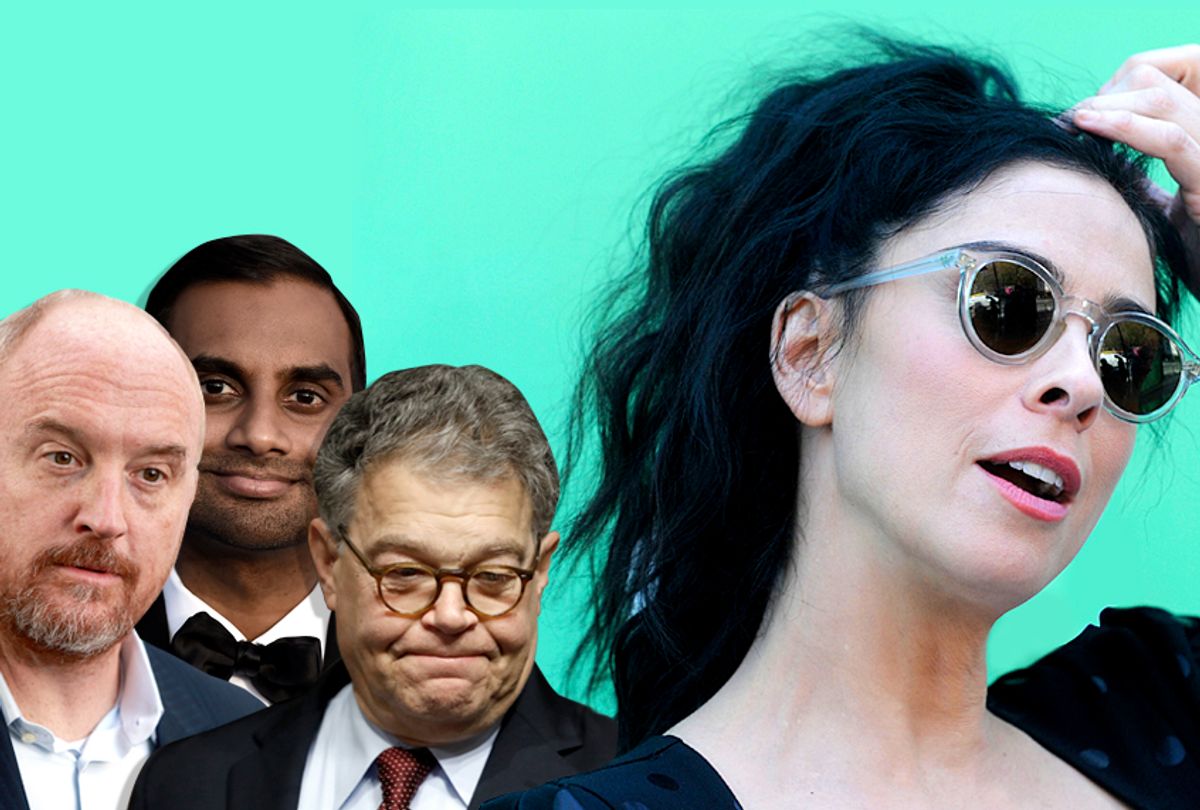 In GQ's profile of comedian Sarah Silverman, the through line is empathy. She has tons of it: for Trump voters and misogynistic Twitter trolls, for her friends Louis C.K. and Al Franken. It seems partly, if not overwhelmingly so, that she believes so much in the power of empathy, connection and the ability for a person to be transformed, because Silverman has herself, she claims.

In the past, the comic had a rolodex of racist, despicable jokes, including performing an entire episode of her Comedy Central show in blackface. "Comedy by nature is not at all evergreen. So if you're doing it right, you look back at your old stuff and you're horrified," Silverman told GQ. "I don't stand by the blackface sketch. I'm horrified by it, and I can't erase it. I can only be changed by it and move on."

"That was such liberal-bubble stuff, where I actually thought it was dealing with racism by using racism. I don't get joy in that anymore. It makes me feel yucky. All I can say is that I'm not that person anymore," she continued. "I'm just fundamentally different."

Is atonement and forgiveness for sexual harassment and other abuses possible? That's  a question that has been bubbling since the first #MeToo was uttered. Often the question comes in the form of prioritizing the abuser's loss of career status over the wellbeing of the abused — in most cases in entertainment, the powerful and celebrated man over the mostly powerless woman, whose career we can't fully compare or quantify because it undeniably suffered as a result of harassment or abuse. Some men seem to be testing the waters on the possibility of bypassing atonement for the sake of a comeback.

I think that there are people who were caught and there were people who were not caught, but the important thing is that they are forever changed. And if that's the case, I don't see any reason why they can't continue being artists. Now, whether they're popular artists or not is up to the audience. I have compassion. There are people that just deny everything they're accused of and they continue to be the politicians or the filmmakers that they are. And there are people that come and say, I'm guilty of these things, and I'm wrong, and I want to be changed from this. And yet those are the ones that kind of are excommunicated forever. He's my brother, so it's hard. I may not have a very clear perspective on it, but I'm trying to.

For Aziz Ansari, who she's still friends with, she said: "I was just like, Gross, I don't wanna know that about Aziz! Hopefully he's dealing with things, looking inward, and will blossom from it."

Silverman had an even stronger opinion about former Sen. Al Franken. "I understand that I may have cognitive distortion, because I love him so much. But all I can say is, and he may not be excited about this, but he has no sexuality," she said. "I believe in my heart of heart of hearts he never copped a feel."

"I'm so sad that he got bullied into resigning, because all he loved in this world was being a senator and representing the people of Minnesota. I've never met a more pure person," she added. "This is a guy whose passion was serving people and making the world a better place. There's a lot of baby-in-bathwater stuff, I think. We'll just get it in the process."

Silverman's right in that it's complicated, though hopefully her compassion and empathy extends to her friends' alleged victims, too. So many men have been so quick to point out to me, without prompting: "He's not a Harvey Weinstein!" about any male celebrity who's been accused of anything less than violent rape and thus should be forgiven — as if the problem is simply women's lack of understanding of nuance and not a systematic culture of misogyny and sexual violence that manifests in infinite ways.

But women know this. No one is suggesting that Ansari or Franken be banished or criminalized in the same way as Weinstein, Roman Polanski, Bill Cosby or R. Kelly should. But the people Ansari, Franken and other men like them have allegedly hurt have a right to tell their stories. And people who perpetuate sexual violence in any form should be held appropriately accountable.

Silverman is also right about C.K. — he'll likely return to an entertainment careerand hopefully, he and Ansari and the others whose accusations are hurtful and disappointing rather than criminal, yet still traumatic and debilitating for the alleged victims, will be really changed, as Silverman says. Hopefully they are all taking responsibility for their actions, which C.K. did — kind of — albeit after years of attributing his abuse to rumor.

But accountability is just step one — although one that Polanski, Cosby and others of an older generation seem to be unwilling to face at all. What comes next is the hard part. There's no clear or universal answer for redemption here, partly because if the problem is systemic, repercussions for individual actions will only enable so much progress. That's why organizations like Time's Up, committed to justice for victims of sexual misconduct, are critical. The commitment must also be to changing the culture.

If and when these men return to public life, as it seems fairly inevitable that they will, hopefully they will demonstrate a renewed awareness of their own power and the potential they have to abuse it, and then going forward, focus on holding each other accountable. We've seen the impact with R. Kelly when fellow male musicians such as Vince Staples, John Legend and Quest Love called him out, and how that signaled a real turning point in his formerly teflon career. More men should do this, especially those who've benefitted from the protection and complicity this culture offers. And they should do it before the pressure is mounting, when the conversations about consent are not simple and painless, and when it means putting their necks on the line for the safety of women. Because as Silverman says, "People are very sure about what is right and wrong until it comes to their front door."