Allegations and pressure are mounting, but they have been for 20 years. When will it be enough to take him down? 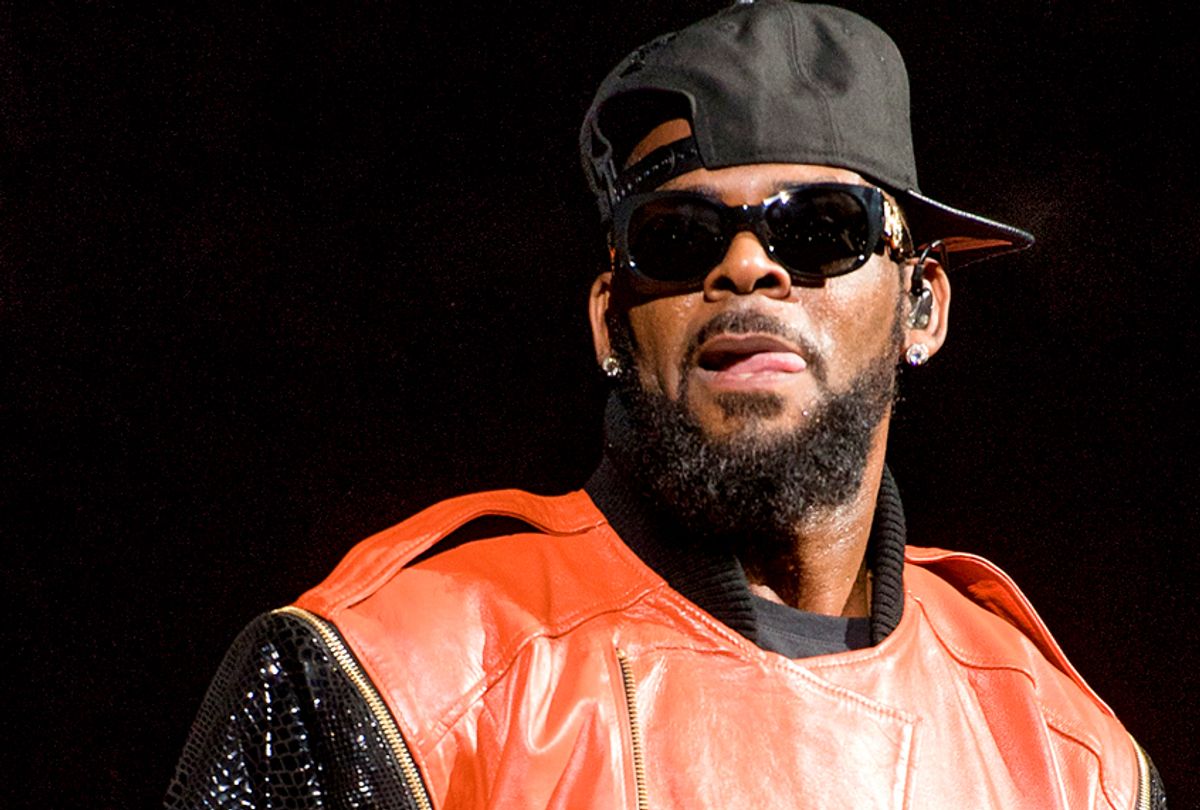 R. Kelly, real name Robert Kelly, has had a slew of sexual abuse accusations made against him since the mid 1990s. But unlike Harvey Weinstein or Kevin Spacey, Kelly has remained largely unscathed by #MeToo, his career still very much intact.

Kelly continues to be represented by RCA. His music is hosted on Spotify and tickets to his concerts are sold on Ticketmaster and Live Nation. While fans, collaborators and Kelly apologists have long looked the other way, somehow deciding that "Ignition Remix" is worth more than the lives and safety of his alleged victims, it has been mostly black women writers and activists who've forced the public to remember and reckon with the ever-mounting allegations, while demanding justice for Kelly's accusers — most of whom are black and low-income.

For decades, this has been tireless and thankless work, but recent revelations show some disruption to what had been Kelly's teflon career and popularity. This month, rapper Vince Staples denounced Kelly in an interview during the Coachella music festival in California. "R. Kelly never went to jail, and he’s a fucking child molester. He’s a child molester and he pees on people and he can’t read and write, and he didn’t go to jail," Staples says. "R. Kelly’s a piece of fucking shit. So if piece of fucking shit R. Kelly didn’t go to jail for being a child molester and peeing on people and having a human trafficking ring in Atlanta, then I’ll be all right."

The clip went viral, and it served as a powerful example of the way men can use their privilege to hold each other accountable, especially regarding sexual violence. It was also an important departure from the overall silence of the music industry. Fellow musicians have been scarce to condemn Kelly or even stop working with him, including Lady Gaga, a sexual abuse survivor and women's rights champion (she collaborated with Kelly in 2013).

There is also the movement to #MuteRKelly, which started after the most recent allegations against the singer — that he operates a sex cult, controlling and abusing a half dozen women. The campaign seeks to finally upend Kelly's career and includes efforts like protesting outside his concerts, which has reportedly prompted venues to cancel multiple tour dates. Further, #MeToo founder Tarana Burke said this week that she finally convinced radio host Tom Joyner to stop playing Kelly's music on air.

After a BBC documentary aired last month, "R. Kelly: Sex, Girls and Videotapes," which contextualized the 20 years of sexual misconduct and assault allegations against the R&B singer, Kelly's lawyer, publicist and executive assistant have reportedly severed ties with him. Even Kelly's daughter Joann told TMZ that she feels "terrible" about the allegations against her father. The combined news begs the question: after all this time, will we finally see the downfall of R. Kelly? After everything he's been accused of, there's really no satisfying answer.

There was the illegal marriage between Kelly, 27 and 15-year-old singer Aaliyah in 1994. A falsified marriage certificate showed her age was altered to 18. Kelly wrote and produced Aaliyah's single, "Age Ain't Nothing But a Number," and on her album cover of the same name, Kelly is pictured leering at her in the background.

In 1996, aspiring singer Tiffany Hawkins sued Kelly and claimed a sexual relationship began between them when she was 15 and he was 24, and included the allegations that he pressured her into group sex with other underage girls. This was first reported in the Chicago Sun Times in 2000, and court documents say Hawkins tried to kill herself when the relationship ended three years later. Kelly settled out of court.

Patrice Jones sued Kelly, accusing him of impregnating her when she was underage and that a member of his inner circle brought her to an abortion clinic. He settled this case out of court.

Tracy Sampson sued Kelly, claiming that when she was 17 and an intern at Epic Records, he coerced her into a nearly year-long sexual relationship, promising to aid her music career. Kelly settled out of court.

The BBC documentary examines Kelly's tactic of allegedly seeking sexual relationships with vulnerable, underage girls. Collaborators claim he had a penchant for cruising places like McDonald's, his old high school in Chicago and malls to solicit them. In many instances, the alleged victims' home situation was tenuous, or they were aspiring musicians and Kelly was able manipulate that ambition. And his predatorial strategy historically worked in Kelly's favor. Despite the fact that these girls were underage when they claim they started having sex with Kelly and thus unable to consent, for Kelly apologists, their dreams of a better life or career meant they wanted it and are to blame.

When Sun-Times reporters asked Kelly's high school music teacher and mentor Lena McLin about the claims that Kelly preyed on freshmen and sophomore girls from her choir, she said, "I don’t know what he did outside of school. But in the school, there was no hanky panky. If they were involved in that, the sad thing is, it takes two to tango."

In 2002, a video tape surfaced allegedly showing Kelly having sex with a 14-year-old girl, who reportedly is referred to by name. In the 26-minute clip, besides sexual acts, the man tells the girl to call him "daddy" and he urinates in her mouth.

A few months later, Kelly was indicted on 21 counts of child pornography charges (seven counts were dropped), though he was acquitted six years later, as the alleged victim failed to cooperate or come forward. "But there were more than a dozen witnesses: her aunt, her grandmother, her pastor, her basketball coach, her best friend, and her best friend’s parents who did testify that, that was the girl and that was how old she was and that was R. Kelly. The jury believed a hundred percent that it was R. Kelly," reporter Jim DeRogatis told my colleague Mary Elizabeth Williams. "They never heard from the victim and so they couldn’t indict. They couldn’t commit."

The most recent allegations describe Kelly as heading a sex cult. Sources say "six women live in properties rented by Kelly in Chicago and the Atlanta suburbs, and he controls every aspect of their lives: dictating what they eat, how they dress, when they bathe, when they sleep, and how they engage in sexual encounters that he records," DeRogatis reported in a Buzzfeed exposé last year. Rolling Stone published a separate exposé about the cult and the way the girls and women there were allegedly physically, sexually, verbally and mentally abused. "He’s still doing this because people make us feel bad for coming forward," Kitti Jones, Kelly's ex-girlfriend and alleged sex cult victim, told BBC.

"If even a fraction of the allegations against Kelly are true, his continued success hinges on the invisibility of black women and girls in America. As long as black women are seen to be a caste not worthy of care and protection, his actions will not receive widespread outcry," Karen Attiah said during an op-ed for the Washington Post. "The saga of Robert Kelly says more about America than it does about him."

But the pressure is mounting. The BBC documentary is horrific, as are the sex cult allegations. Poor ticket sales and protests are forcing the cancellation of his shows. And there is a growing possibility that Kelly will have to answer soon. Author and activist Feminista Jones added that "He hasn't put out a good album in a long time, ​so it's easier for people to distance themselves when the money stops rolling in."

So we may be finally entering a space where the allegations against Kelly are too thoroughly anchored in the public conscience, that it will hurt the music industry to continue to look the other way. But this won't absolve Kelly's label or collaborators who spent decades shielding an alleged sexual predator, operating as an indestructible wall of silence. Kelly's former business manager said candidly to BBC reporter Ben Zand of the allegations: "My loyalty is to the person who changed my life."

If R. Kelly's career finally topples, what do we say to Tiffany or to Patrice or to Tracy or to the family of Aaliyah? "Twenty years later, we believe you" just feels wholly insufficient. With the conviction of Bill Cosby, it may not be too late to hold Kelly accountable in some meaningful way, but the truth is we've failed his alleged victims already. DeRogatis, who has reported on the accusations against Kelly since 2000, famously said  — and these words haunt me: "The saddest fact I’ve learned is nobody matters less to our society than young black women. Nobody."