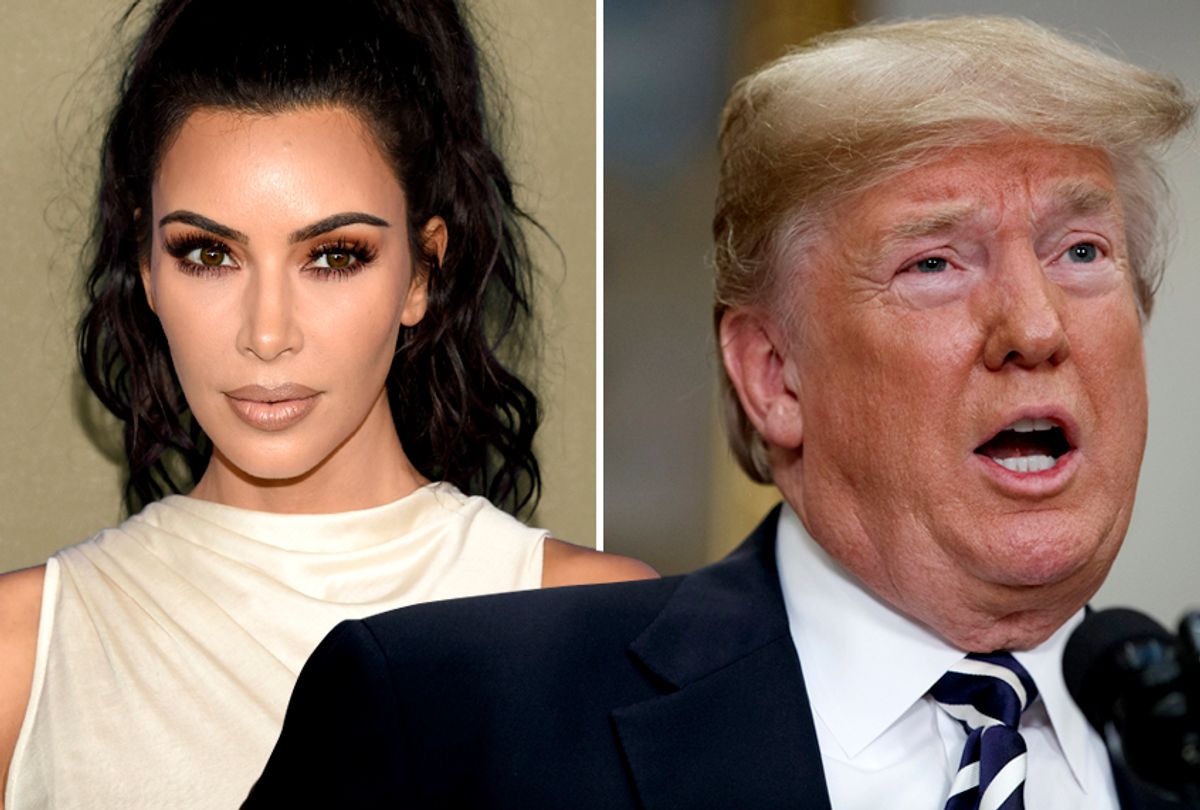 President Donald Trump signed a commutation for Alice Marie Johnson, a 63-year-old great-grandmother who has been in a federal prison since 1996, on Wednesday. After Kim Kardashian West met with the president at the White House last week to advocate for her early release from a life sentence without the possibility of parole, Trump obliged.

Johnson was a first time, nonviolent drug offender — a fact that drew the attention of the reality star.

Kardashian West had been lobbying for Johnson's release since October of last year, enlisting her lawyer to negotiate with senior White House advisers Jared Kushner and Ivanka Trump and eventually bringing Johnson's sentence to the Oval Office. Kushner, whose security clearance was recently reinstated, has been vocal about his desire to advance prison reform.

Significantly, Trump's attention and leniency to Johnson breaks from his clemency spree of high-profile conservatives and celebrity figures of late, including former sheriff Joe Arpaio, former Dick Cheney aide Scooter Libby, Navy sailor Kristian Saucier and right-wing pundit Dinesh D'Souza. Like his recent pardon of boxing legend Jack Johnson, whose case was brought to Trump by Hollywood star Sylvester Stallone, Johnson's commutation comes as a result of celebrity. Though it's telling that Trump chose to commute Johnson's sentence rather than grant her a pardon like the people aforementioned.

Kardashian West largely propelled Johnson's harsh sentence to the spotlight after she learned about her case when Mic published a video about it in October 2017. "If you think about a decision that you’ve made in your life and you get life without the possibility of parole for your first-time nonviolent offense, there’s just something so wrong with that," she told Mic.

After her meeting with Trump, she told the publication that Trump "really spent the time to listen to our case that we were making for Alice. He really understood, and I am very hopeful that this will turn out really positively."

Ms. Johnson has accepted responsibility for her past behavior and has been a model prisoner over the past two decades. Despite receiving a life sentence, Alice worked hard to rehabilitate herself in prison, and act as a mentor to her fellow inmates. Her Warden, Case Manager, and Vocational Training Instructor have all written letters in support of her clemency. According to her Warden, Arcala Washington-Adduci, “since [Ms. Johnson’s] arrival at this institution, she has exhibited outstanding and exemplary work ethic. She is considered to be a model inmate who is willing to go above and beyond in all work tasks.”

While this Administration will always be very tough on crime, it believes that those who have paid their debt to society and worked hard to better themselves while in prison deserve a second chance.”

In a formal statement, Kardashian West added: "I would like to thank President Trump for his time this afternoon. It is our hope that the President will grant clemency to Ms. Alice Marie Johnson who is serving a life sentence for a first-time, non-violent drug offense. We are optimistic about Ms. Johnson's future and hopeful that she – and so many like her – will get a second chance at life.

"BEST NEWS EVER!!!!" Kardashian West tweeted Wednesday after the commutation was signed.