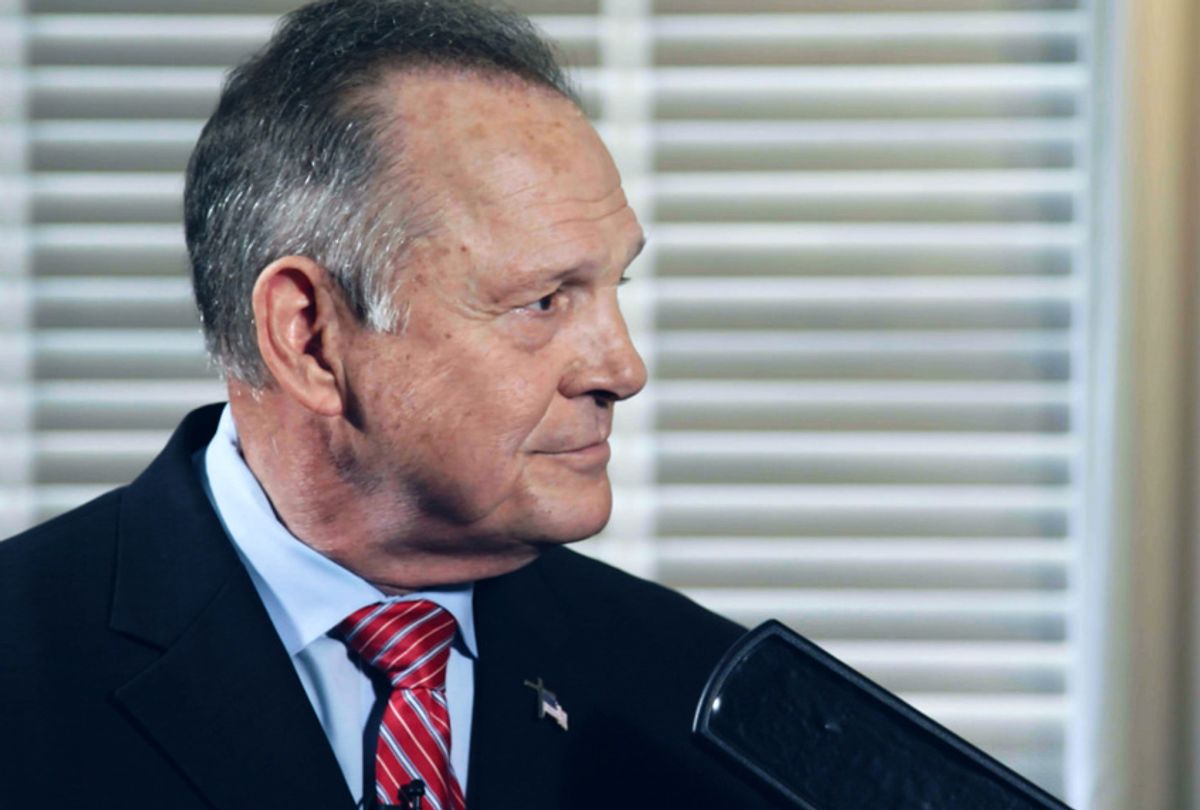 Roy Moore, who ran unsuccessfully for a U.S. Senate seat in Alabama last year, has filed a lawsuit against comedian Sacha Baron Cohen for defamation and emotional distress, according to NBC News. The Republican politician was pranked on Baron Cohen's Showtime series "Who is America" and is now seeking $95 million in punitive and compensatory damages. The lawsuit also lists CBS and Showtime as defendants.

For "Who is America," which aired this summer, Baron Cohen tricked several conservative politicians into appearing on the show. The host dressed in various disguises and encouraged them to participate in humiliating acts and/or interviews. But Moore seems to be the first to sue Baron Cohen as a result.

"The lawsuit filed Wednesday in federal court in Washington, D.C., accuses Baron Cohen of defaming Moore and says Moore 'suffered extreme emotional distress' as a result of 'being falsely portrayed as a sex offender and pedophile' on the show," NBC News reported. "Moore was duped into appearing on a segment where Baron Cohen demonstrated a supposed pedophile detecting device that beeped when it came near Moore."

When Moore was running for office last year, he was accused of sexually assaulting teenage girls as young as 14 and pursuing romantic and sexual relationships with minors when he was in his 30s and worked as a prosecutor. Moore has repeatedly denied the allegations.

"Sasha Baron Cohen, who is not only low-class but also a fraudster, will now, along with Showtime and CBS, be held accountable for his outrageous and false, fraudulent and defamatory conduct, which callously did great emotional and other damage to his great man and his wife and family," Moore's lawyer, Larry Klayman, founder of the conservative group Freedom, said in a statement.

"Klayman said Moore thought he was receiving an award for supporting Israel when he agreed to appear on the show," according to NBC News. "In the segment, Baron Cohen appeared as the bushy eyebrowed faux counterterrorism instructor 'Col. Erran Morad' discussing bogus military technology, including a supposed pedophile detector. The device repeatedly beeped as it got near Moore, who sat stone faced."

"I've been married for 33. I've never had an accusation of such things," Moore says to Cohen during the episode. He eventually walked out of the interview.

In another episode, former Arizona sheriff Joe Arpaio — who President Donald Trump pardoned, after he was convicting of criminal contempt in July 2017 after defying a judge's order to stop the practice of illegally detaining suspected undocumented immigrants in Arizona — ended up arguing with a tiny toy donut about the need for gun ownership. Arpaio unsuccessfully ran for the Republican nomination for a U.S. Senate seat in the 2018 midterm elections.

Jason Spencer, a Georgia state representative, was forced to resign after his appearance on "Who is America." In it, Spencer repeatedly shouted racial slurs and exposed his bare bottom in what he believed were anti-terrorism self-defense drills.

Former Republican vice presidential candidate and Alaskan Gov. Sarah Palin was the first to come forward saying she had been duped by Baron Cohen, however her interview never aired.

This is not the first time that Baron Cohen has faced lawsuits over such pranks. A few people who appeared in the movie "Borat" filed suit against the comedian alleging that they had been similarly duped. However, because the individuals had signed releases and accepted money, a New York judge tossed the lawsuits out.

"Moore's lawsuit suggests that he too signed a release, but contends it was fraudulently obtained," NBC News reported. "Moore's lawyer wrote that as they trying to stop the segment from airing, 'defendants CBS, Showtime and thus Cohen were informed that the release that Judge Moore had signed was obtained through fraud, and was therefore void and inoperative.'"

Moore's lawyer writes in the lawsuit: "Had Judge Moore and Mrs. Moore known that 'Erran Morad' was Defendant Cohen, Judge Moore would have never agreed to be interviewed."