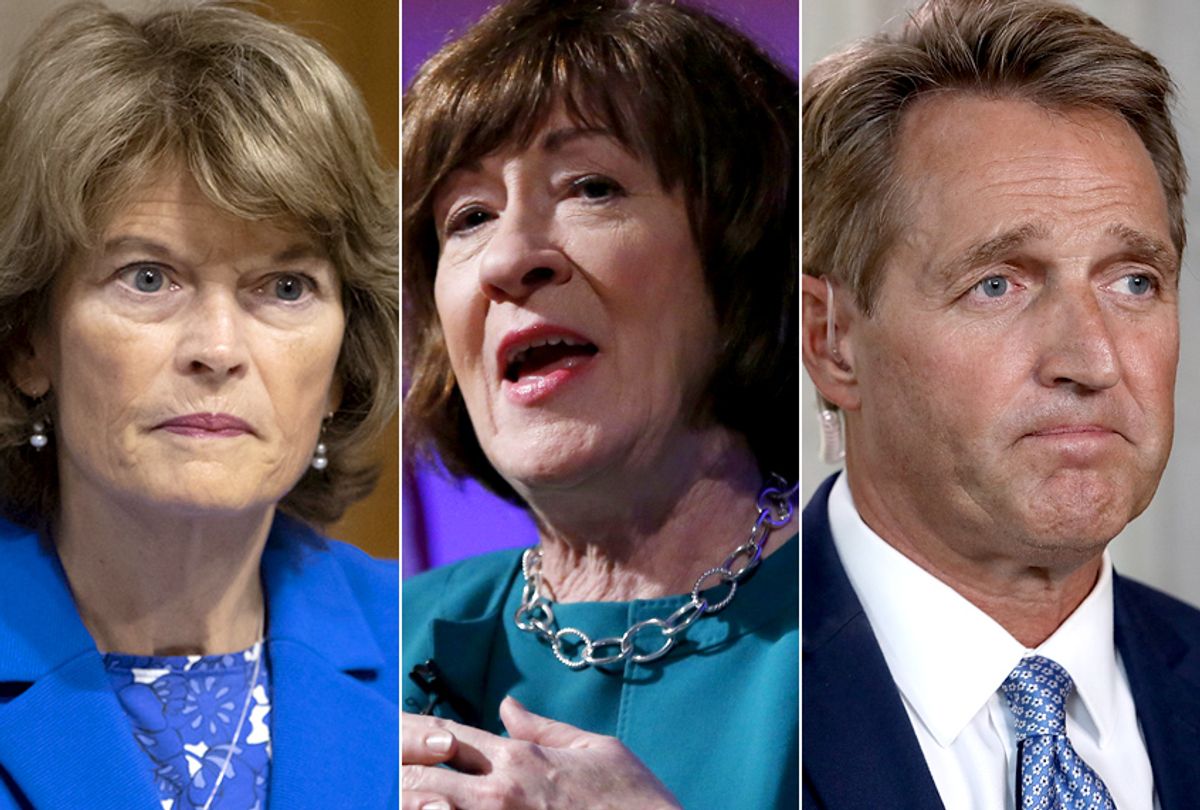 "While some may argue that a different standard should apply regarding the Senate's advice and consent responsibilities, I believe that the Constitution's provisions of fairness and due process apply here as well," Flake said in a statement. "I will vote to confirm Judge Kavanaugh."

Although Flake has claimed he has doubts about Kavanaugh, he voted Friday morning to strike down a motion supported by all Democrats on the committee to subpoena Mark Judge – the key witness surrounding Ford's allegations. (Ford has alleged that Judge was present when Kavanaugh attacked her.)

After announcing he would vote to confirm Kavanaugh, the Arizona Senator was confronted Friday morning by women who claimed they were sexual assault survivors.

“Earlier this week, I shared my survivor story for the first time in front of Senator Jeff Flake’s office, and I know that I am not alone. Survivors from Arizona and across the country have been flooding his office with their stories," Archila said in a statement following the confrontation. "By announcing he will vote 'yes' on Brett Kavanaugh’s nomination, Flake showed us that he does not care about our truths and does not care about women. He claims to support civility, but has proven today that he would rather ignore women’s stories and support a disrespectful sexual abuser than stick to his values.”

Flake's decision appears to have signaled to Senate Republicans on the Judiciary Committee that they can maintain their full-speed ahead confirmation timeline. The panel is set to vote Friday at 1:30 p.m. ET on the nomination.

Republican leaders are eyeing for the full chamber to hold a procedural vote on the Senate floor midday Saturday and a final vote early next week – aiming for Kavanaugh to be confirmed and sworn in as a justice soon after the high court kicks off its new term Monday. Kavanaugh was nominated by Trump to the fill the seat vacated by Justice Anthony Kennedy, who was a key swing vote on the high court.

All eyes remain on Republican Senators Lisa Murkowski of Alaska and Susan Collins of Maine, who have still not announced how they will vote on Kavanaugh's confirmation. There are also questions around how Democratic Senators Joe Donnelly of Indiana, Heidi Heitkamp of North Dakota and Joe Manchin of West Virginia will vote; the trio previously voted to confirm Neil Gorsuch, who last year was Trump's first Supreme Court nominee.

Collins, Flake, Manchin and Murkowski reportedly met in private late Thursday, but still had not reached a decision.

"We're still talking. There's no decisions made on anything, I can assure you of that," Manchin told Bloomberg News. He added there were still "some concerns" to be addressed before any decision can be made.

Now that Flake announced his "yes" vote on Kavanaugh, it is even more likely that Collins, Manchin and Murkowki could follow suit.

As Salon's Matthew Rozsa previously reported, "Since Republicans currently control the Senate with a 51-49 majority, it would presumably take just two Republican senators to thwart Kavanaugh’s confirmation. (That's assuming that all 47 Democrats, plus the two independent senators, vote against him.)"

If Kavanaugh gets 50 votes, it is possible Vice President Mike Pence will be called in to cast the tie-breaking vote, allowing Republicans to confirm Kavanaugh to the Supreme Court.

In recent days, former President George W. Bush has reportedly been lobbying senators who are undecided on Kavanaugh and are unlikely to be swayed by Trump to vote "yes," The Washington Post reports. Kavanaugh worked in Bush's White House before being confirmed to his current position on the D.C. circuit court in 2006; Bush nominated him for the job. He also served as both a staff secretary and an associate White House counsel. His wife Ashley was Bush's secretary from 1996 to 2004.