Doesn't the GOP loves states' rights? Not when they impinge on corporations' right to exploit and surveil you 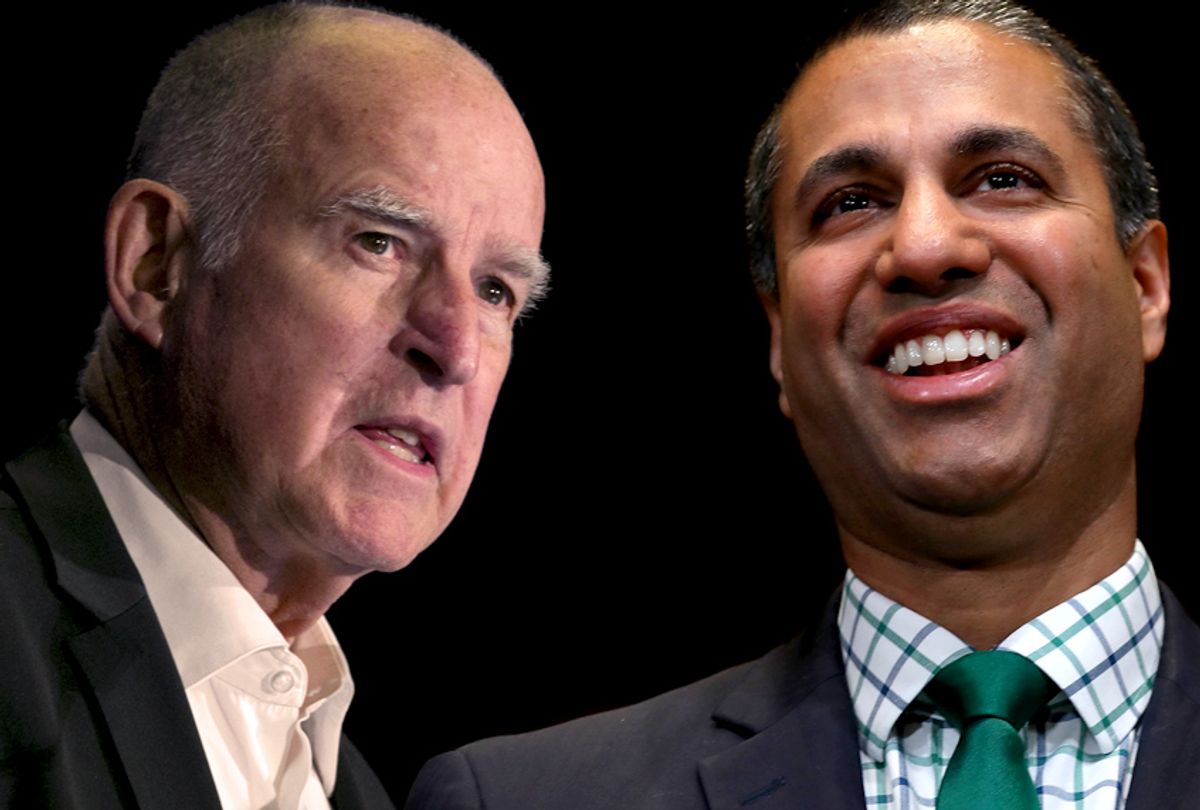 Since Trump's election, the state of California has filed numerous lawsuits against the federal government to block various Trump Administration laws, but this weekend the U.S. Department of Justice was the one picking the fight with the Golden State.

On Sunday, nearly one hour after California Governor Jerry Brown signed into law the state’s unprecedented net neutrality bill — which sought to uphold and advance Obama-era net neutrality regulations in California — the Justice Department filed a lawsuit to block it.

“The Justice Department should not have to spend valuable time and resources to file this suit today, but we have a duty to defend the prerogatives of the federal government and protect our Constitutional order,” Attorney General Jeff Sessions said in a statement on Sunday.“We will do so with vigor. We are confident that we will prevail in this case —because the facts are on our side.”

The California bill in question, SB822, is the most comprehensive state approach to counter the FCC’s decision to overturn net neutrality regulations. SB822 would prevent internet service providers (ISPs) from throttling or blocking websites, in addition to placing restrictions on behaviors like “zero rating,” meaning allowing access to websites only under certain conditions.

Federal Communications Commission Chairman Ajit Pai expressed his support for the lawsuit in a statement. While he is not officially listed as a plaintiff on the complaint, Pai said he “looks forward” to working with the Justice Department to “ensure the Internet remains ‘unfettered by Federal or State regulation,’ as federal law requires, and [remains] the domain of engineers, entrepreneurs, and technologists, not lawyers and bureaucrats.”

“I’m pleased the Department of Justice has filed this suit,” Pai said. “The Internet is inherently an interstate information service.”

Specifically, the complaint claims that the bill is “preempted by federal law and therefore violates the Supremacy Clause of the United States Constitution.” However, it is this specific clause that has many legal experts up in arms to determine who has authority over the internet — and whether or not the FCC is within its right to file such a lawsuit, or if the move is merely political.

Since the U.S. Court of Appeals for the D.C. Circuit is hearing the appeals of the FCC's Restoring Internet Freedom order, it will ultimately be the D.C. Circuit’s responsibility to interpret the FCC’s move to remove ISPs from Title II. Title II is a clause that states that ISPs are subject to the same regulations as other telecommunication companies; it was first applied in 2015. But in the highly debated overturn that passed in 3-2 vote in December, it was removed.

If ISPs are unregulated, then they have free reign — so does that mean the FCC can still regulate them?

Barbara van Schewick, Professor of Law and Electrical Engineering at Stanford Law School, tells Salon this can only be litigated by U.S. Court of Appeals for the D.C. Circuit in February 2019.

Oregon, Washington, and Vermont are also attempting to preserve net neutrality through legislation. It is interesting, van Schewick said, that the Justice Department chose to take action now, but that it is because California’s bill is the most comprehensive.

“The California bill is the first state level law that would truly bring back all of the net neutrality protections,” van Schewick explained.

Gus Hurwitz, an Associate Professor of Law  and Co-director, Space, Cyber, & Telecom Law Program at the University of Nebraska College of Law, tells Salon he thinks the Justice Department is well within its rights to file the lawsuit though.

“I am very strongly in the view that California legislation is preempted by the FCC and expect that the Justice Department will be successful in its litigation against the state,” Hurwitz said, adding that he believes the California legislation indirectly conflicts with the FCC’s rules because the internet is an “interstate service.”

"While the Trump Administration continues to ignore the millions of Americans who voiced strong support for net neutrality rules, California — home to countless start-ups, tech giants and nearly 40 million consumers – will not allow a handful of power brokers to dictate sources for information or the speed at which websites load. We remain deeply committed to protecting freedom of expression, innovation and fairness,” Becerra said in a statement.

Jessica Rosenworcel, one of two Democrats among the five FCC commissioners, said California’s bill was “a welcome development.”

“It’s good for consumers, good for businesses, and good for anyone who connects and creates online,” Rosenworcel said in a statement. “The Department of Justice has signaled that it will challenge California's new law in court. Regrettably, this confirms that Washington is not listening to the American people."