"We're moving on from that," Graham said of Handler's homophobia. But Graham can't move on from his anti-LGBT record 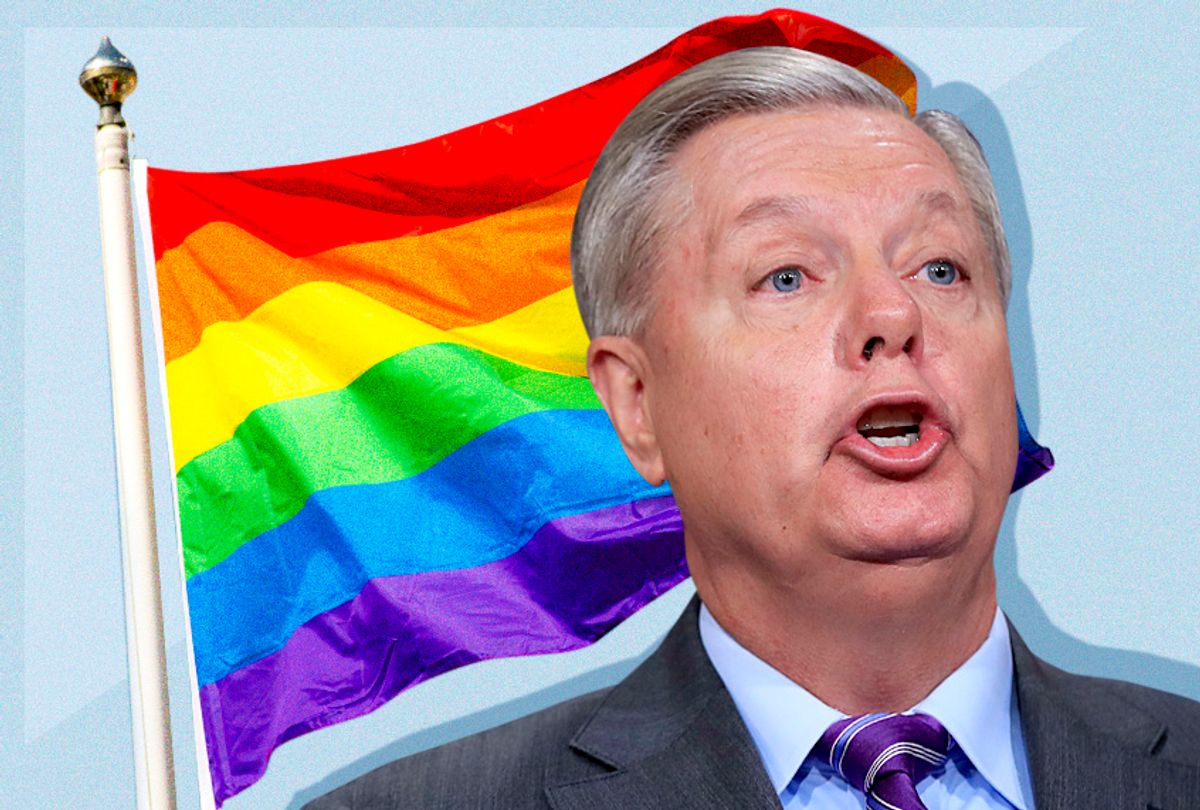 Republican Senator Lindsey Graham of South Carolina has a lengthy record of opposing LGBTQ rights — and his early legislative efforts are coming under fresh scrutiny after the South Carolina Republican attempted to defend himself against a recent homophobic tweet from Chelsea Handler, in which the comedian suggested he was gay.

In a brief interview with TMZ, Graham said he believed Handler was equating homosexuality with being evil.

"These comments — I don't think they reflect well on her, I don't know how that makes us a better country," Graham said. "We're moving on from that. Belittling people is not as funny as it used to be, and that's a good thing."

However, Graham's latest remark that "belittling people is not as funny as it used to be" suggests he might have had some sort of a spiritual awakening over the past six days when it comes to making disparaging comments. Just last week, the Republican lawmaker cast Kavanaugh as the "slut whore drunk" victim of Dr. Christine Blasey Ford's story of sexual misconduct. Ford accused Kavanaugh of attempted rape in the 1980s and subsequently testified to the Senate Judiciary Committee last month that she was "100 percent" certain that the judge had assaulted her.

Graham then told reporters that it would have been "unjust" for Kavanaugh to "have his life ruined based on the allegations that were presented." He also accused Senate Democrats of participating in a "smear campaign" against Kavanaugh during the confirmation fight and called for an investigation into those who drew attention to the sexual misconduct allegations against Kavanaugh.

In addition to criticizing Ford, Graham's early legislative record shows he has a lengthy history of opposing gay rights.

Throughout his fifteen years in the upper chamber, Graham has spoken out against marriage equality; claimed that same-sex marriage will lead to legal polygamy; criticized the Supreme Court's ruling against the Defense of Marriage Act (DOMA), the law which allowed some states to refuse to recognize same-sex marriages granted under the laws of other states; and voted against the Employment Non-Discrimination Act, the legislation that makes it illegal under federal law for employers to discriminate against their employees based on the employee's sexual orientation of gender identity.  In 2002, during a South Carolina Senatorial debate, he said ENDA would be "moving an agenda" that was "not necessary."

Before joining the upper chamber, Graham served one term in the House of Representatives, from 1993 to 1995. He represented South Carolina's 3rd District, located in Oconee County. According to a review by Salon, Graham sponsored state legislation that aimed at preventing members of the LGBTQ community from serving in the South Carolina National Guard or the South Carolina State Guard. He suggested LGBTQ people would make the military less effective and undermine discipline. Graham has not responded to Salon's request for comment inquiring whether he still believes members of the LGBTQ community should be barred from serving in South Carolina's National Guard or State Guard.