Donald Trump spell-check: Why does Our Leader insist on capitalizing "Country"?

Trump's bizarre spelling choices may seem amusing. But stop laughing: His use of "Country" has a hidden meaning 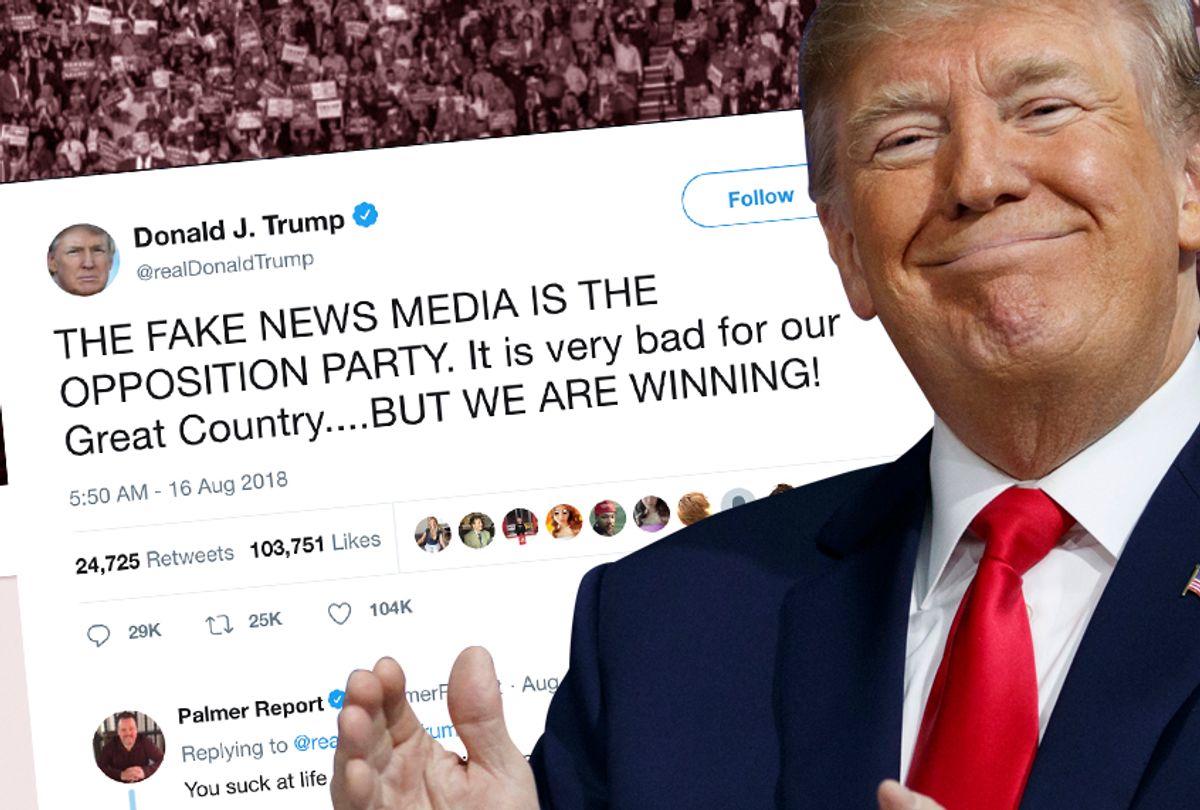 There is nothing funny about Donald Trump. Like other autocrats and political thugs he thrives on being underestimated. Last week there was another example of this error by Donald Trump's detractors and others who oppose him.

When referring to the USA, I will always capitalize the word Country!

Trump was mocked by comedians on late night television for this supposed gaffe. Other prominent voices pointed to Trump's "misspelling" as further proof that he is a dolt and a fool. By implication, his voters are fools and dolts as well. This version of liberal Schadenfreude is a defining feature in the Age of Trump.

It is small comfort which ignores the fact that Donald Trump's grammatical errors and odd spelling are -- as admitted by White House insiders some months ago -- strategic choices designed to make him appear more "folksy" and "authentic." Trump's faux-populist appeal depends upon his ability to relate to his supporters by sharing their grievances and hostility toward those liberals and progressives they perceive as looking down on "real Americans."

I asked several leading experts on fascism and authoritarianism to help me understand Trump's conversion of "Country" into a proper noun.

Ruth Ben-Ghiat, professor of history and Italian studies at New York University, author of the forthcoming book "Strongmen: How They Rise, Why They Succeed, How They Fall," and featured commentator in Michael Moore's "Fahrenheit 11/9":

Trump's statement that he'll capitalize the word Country represents yet another attempt to polarize the American population and set up one half as "moral," "just" and politically and, above all, racially acceptable. It is a technique used by every authoritarian leader, often with success. Some may look at this tweet as just another quirky Trump language proposition, but nothing he does is accidental, including his capitalization strategies.

Richard Frankel, professor of modern German History at the University of Louisiana at Lafayette, an expert on the rise of Nazism in Germany whose work has also been featured in Newsweek and on the History News Network:

I see it as another way of saying "America First." He’s putting the emphasis on country, on nation, on America before anything else. He’s contrasting himself and his followers with those who see America as part of a much larger community of nations, in which cooperation, not confrontation, is what is what’s best for everyone. Those who see it his way are the “real Americans.” Those who don’t are the enemy. It’s the pitting of "America Firsters" against the dreaded “Globalists.” It’s another way to divide the country — inclusion through exclusion.

Jason Stanley, professor of philosophy at Yale University and author of  "How Propaganda Works" as well as the new book "How Fascism Works: The Politics of Us and Them":

Via linguistic style and repetition, Trump is inculcating his followers with an ethic of authoritarian nationalism. Organized religion is a local authoritarian structure; the authority of God is signaled linguistically, by capitalizing "God" or not completely spelling out the word. According to Trump, like "God," "Country" should be capitalized. This is a linguistic means of signalizing the quasi-religious authority of the nation. And since the nation is not a person, or even a person-like figure, that religious authority should be transferred to its leader, Donald Trump.

It (again) reminded me of this quote from Victor Klemperer's "Language of the Third Reich": "Nazism permeated the flesh and blood of the people through single words, idioms and sentence structures which were imposed on them in a million repetitions and taken on board mechanically and unconsciously … language does not simply write and think for me, it also increasingly dictates my feelings and governs my entire spiritual being the more unquestioningly and unconsciously I abandon myself to it."

Several days after Trump made his declaration about the correct spelling of our "Country," he announced that he was a proud "nationalist." Because Trump is a racial authoritarian -- and a student of "alt-right" guru Steve Bannon as well as White House adviser Stephen Miller, principal architect of his nativist immigration policy -- his brand of nationalism is in no sense "neutral." It is in reality white nationalism, whether called by that name or not. Donald Trump may evade or deflect from that fact. But it is true nonetheless. This is evident through his repeated and overt hostility toward nonwhites and Muslims.

An embrace of nationalism by Donald Trump fits neatly within his logic for capitalizing the word "Country" when referring to the United States of America.

Benjamin Hett, professor of history at Hunter College and the Graduate Center, City University of New York, author of "Burning the Reichstag: An Investigation into the Third Reich’s Enduring Mystery" as well as the new book "The Death of Democracy: Hitler's Rise to Power and the Downfall of the Weimar Republic":

This is language I do not remember hearing from any other president. And this is where the significance of "Country" comes in. Trump the "nationalist" with his capital C in "Country" uses "globalist" as a pejorative. He is step by step dismantling the international infrastructure which the United States created after the Second World War to maintain a democratic and prosperous global order. Just recently he has begun dismantling the key INF treaty with Russia, another horrifically dangerous step. This is all reminiscent of the nationalism of the German administrations of the early 1930s, up to and including Hitler -- turn away from the world, turn away from crucial international connections, turn away from peace and democracy. We know, or should know, that this cannot and will not lead anywhere good.

Some people laugh when they are terrified. It is not that the situation is funny; rather, their brains process existential dread through the physical act of laughter. This is why so many of us laugh at Donald Trump's supposed gaffes and misspellings, and his other crude and boorish behavior. Donald Trump's America is a real thing. We are stuck in it and many of us still cannot believe this has all come to pass. In the final analysis, laughter provides some short-term relief during the walk to the political gallows. The laughter feels good. The noose is still waiting.