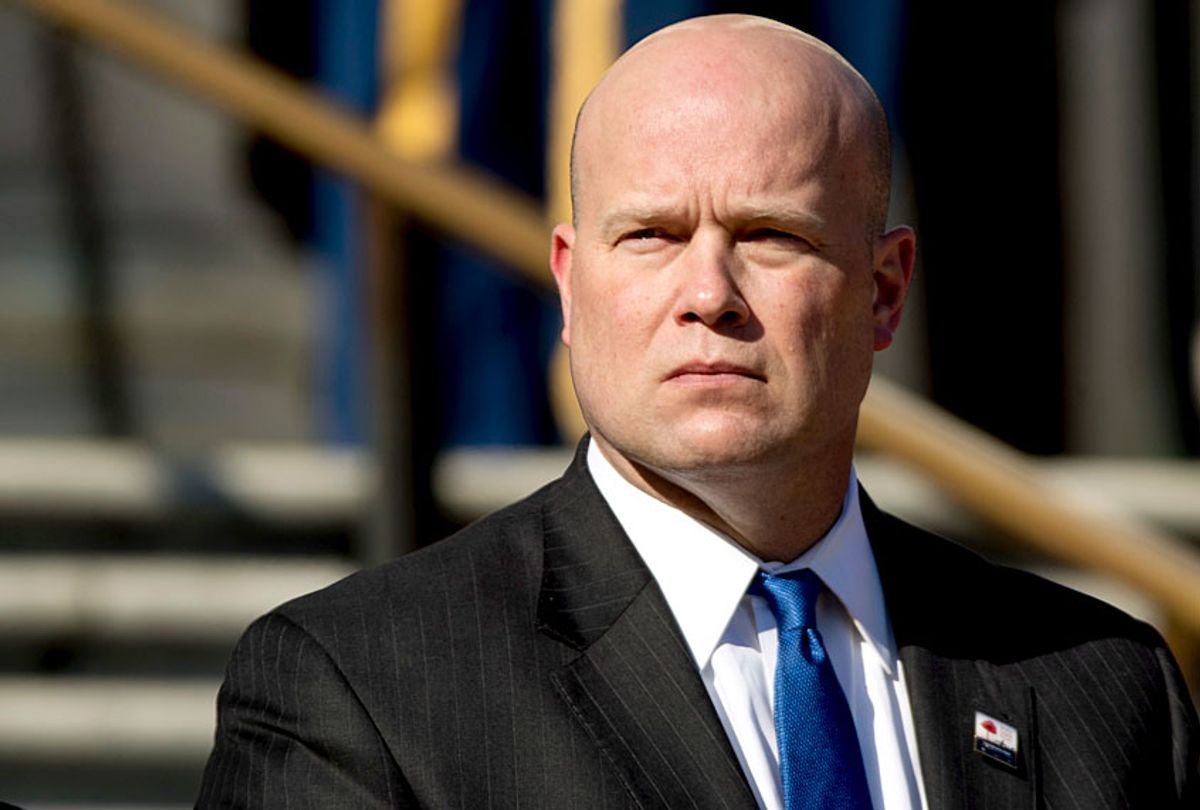 San Francisco City Attorney Dennis Herrera on Monday joined the chorus of Democrats who have urged acting attorney general Matt Whitaker to recuse himself from overseeing the ongoing federal investigation into allegations of collusion between Donald Trump's 2016 presidential campaign and the Russian government, which Whitaker previously railed against in several op-eds.

Herrera sent a letter Monday to the Justice Department, in which he questioned the constitutionality of President Trump's appointment of Whitaker, writing,  "I have serious questions about the legality of Mr. Whitaker serving as the Attorney General of the United States. At no point in his Justice Department tenure has Mr. Whitaker been confirmed by the Senate. That appears to be unprecedented for someone serving as the country's top law enforcement officer."

"The American people need to have faith that the head of their Justice Department lawfully holds the job," Herrera continued. "No Cabinet position demands more scrupulous fidelity to the Constitution and the rule of law than the Attorney General. This is a position where the officeholder should be beyond reproach. That is why we need to make sure that the President's appointment here is lawful."

Herrera echoed points made in recent days by Democrats and conservative legal scholars, who have argued that it is illegal and unconstitutional for Whitaker to serve as acting attorney general because he was not confirmed by the Senate — criticism which Trump responded to by arguing that Whitaker was "confirmed at the highest level" in 2004 when he was a federal prosecutor in Iowa and by asking why Robert Mueller, who is leading the special counsel probe, wasn't confirmed by the upper chamber.

Herrera's decision to challenge the legality of Whitaker's appointment also comes several days after 19 Democratic state attorneys general joined Democrats in the House and Senate who have already called on Whitaker to recuse himself from overseeing the Russia investigation.

"Because a reasonable person could question your impartiality in the matter, your recusal is necessary to protect the essential and longstanding independence of the department," the attorneys general said in a letter, which was written by Massachusetts' attorney general Maura Healey. "At various opportunities, you have suggested cutting the special counsel's budget or limiting his authority to follow lines of inquiry."

"As prosecutors and law enforcement officials committed to the rule of law, we believe that the independent Special Counsel must have the full authority to investigate and, if warranted, prosecute any violations of federal law," they wrote.

Whitaker's appointment has come under intense scrutiny as he has previously railed against the Mueller investigation by writing op-eds titled, "Mueller's investigation of Trump is going too far" for CNN and "I would indict Hillary Clinton: Opposing view" for USA Today. The Trump loyalist, who previously served as Jeff Sessions' chief of staff, is a GOP partisan and a former Fox News contributor. He has defended Trump's decision to fire FBI Director James Comey in an op-ed titled, "Comey served faithfully, but the president made the right decision." In a CNN op-ed, he argued that any investigation into Trump's personal finances would constitute "a red line" that Mueller is "dangerously close to crossing."

President Trump on Friday attempted to defend his decision to hire Whitaker as acting attorney general by claiming he doesn't know him — a lie that was quickly revealed.

He also denied taking Whitaker's pulse on the Mueller investigation, though he didn't have to. Throughout his time as Sessions' chief of staff, Whitaker demonstrated his willingness to stand by the president — most notably by defending him on television and arguing in opinion pieces that any investigation into Trump's personal finances would constitute "a red line" that Mueller is "dangerously close to crossing." Whitaker is a Trump loyalist — and the president has made it clear that he favors loyalty over nearly everything else.

With Sessions now out, the president must choose the nation's next top law enforcement official — and there are six people he is reportedly considering to replace him. The list includes the former Kansas Secretary of State and right-wing activist Kris Kobach and Chris Christie, the former governor of New Jersey.

On Friday, Trump said, "I like Chris Christie, but I have not talked to him," although the former New Jersey governor was spotted on Thursday at 1600 Pennsylvania Ave. He told reporters, "I did not see Chris Christie yesterday, I heard he was in the White House."