Meghan McCain has stinging words for Paul Manafort: "He should rot in jail and then rot in hell" 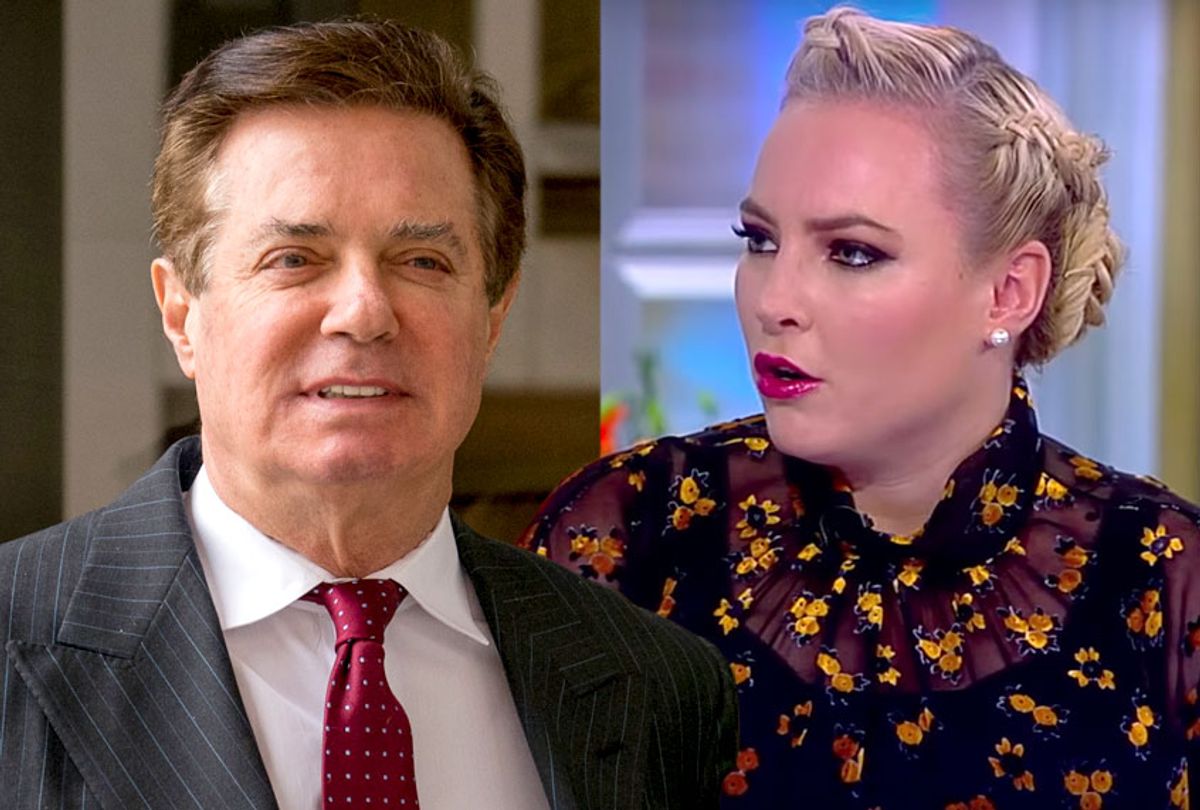 Meghan McCain did not hold her feelings about Paul Manafort’s recent misdealings in the Robert Mueller investigation back on Tuesday's episode of "The View," arguing that President Donald Trump's former campaign chairman "should rot in jail and then rot in hell" for serving as "a conduit between Russian oligarchs in Putin’s inner circle."

Manafort was accused of repeatedly lying to federal investigators in breach of the plea agreement that he signed two months ago with special counsel Robert Mueller's team of investigators. According to the New York Times, prosecutors have claimed in a new court filing that Manafort lied about “a variety of subject matters" – claims which Manfort has vehemently denied through his attorneys.

The court filing submitted late Monday night indicates that the special counsel believes that Manafort is withholding pertinent information about the investigation into alleged collusion between Trump's 2016 presidential campaign and Russia. Manafort has proven to be one of the most controversial figures in the Mueller investigation, and for McCain, one of the lone Republicans on her show's panel, his plight is not a partisan issue.

“What we do know was one of the things that got him in jail was that he was an unregistered foreign agent and he was a conduit between Russian oligarchs in Putin’s inner circle,” McCain said.

“People that do blood money dealings like this – he should rot in jail and then rot in hell, as far as I'm concerned with Paul Manafort," the daughter of the late Republican presidential candidate John McCain continued.

“She means that in a nice way,” veteran host Joy Behar interjected much to the audiences’ amusement, but McCain plowed onward through the laughter.

“No I don't. I think that, when you take blood money from foreign adversaries when you're a United States citizen in the way that he did," McCain added. "The idea that he could be pardoned . . . it would enter us to a new level of insanity in this country, which I didn't think I could take.”

However, according to a New York Times report, the president could indeed move to pardon Manafort, as well as Michael Flynn, his former national security advisor. Maggie Haberman and her colleagues elaborate:

A lawyer for President Trump broached the idea of Mr. Trump’s pardoning two of his former top advisers, Michael T. Flynn and Paul Manafort, with their lawyers last year, according to three people with knowledge of the discussions.

The discussions came as the special counsel was building cases against both men, and they raise questions about whether the lawyer, John Dowd, who resigned last week, was offering pardons to influence their decisions about whether to plead guilty and cooperate in the investigation.

“He was a bad dude to begin with. He never should have been on a presidential campaign,” McCain said to her co-hosts. “. . . Manafort had a reputation. I mean, he broke up his consulting firm because of it – because he was doing deals like this and having nebulous interactions.”

During the show, McCain not only disavowed Manafort, but also Mississippi’s Republican Senator Cindy Hyde-Smith, whose Tuesday runoff has been mired by headlines of racially insensitive incidents. “It’s exhausting to be a Republican and have a woman like this on TV,” McCain said. “She is a bad candidate.”

“I interpret any acceptance of any of this as veiled — I’m not allowed to say completely racist, but in my opinion, it’s deeply insensitive,” she later added.

As my colleague Shira Tarlo writes, Hyde-Smith is "a politician whose apparent nostalgia for Confederate tradition and history of racially insensitive remarks have stirred painful memories of Mississippi’s long and dark past. Hyde-Smith has said she would sit “in the front row” at a “public hanging,” sported Confederate military gear and graduated from an all-white private school — sometimes known as a “segregation academy” — while sending her daughter to another. She also co-sponsored a resolution in Mississippi’s state Senate in 2007 that praised a Confederate soldier for his efforts to “defend his homeland,” pushed a “revisionist view of the Civil War” and said voting should be “a little more difficult” for “liberal folks.”

“There’s so many interesting, provocative Republicans coming out," McCain added. And I’m stuck with this, and it’s exhausting.”