Trump insults Mattis by saying he gave him a "second chance" 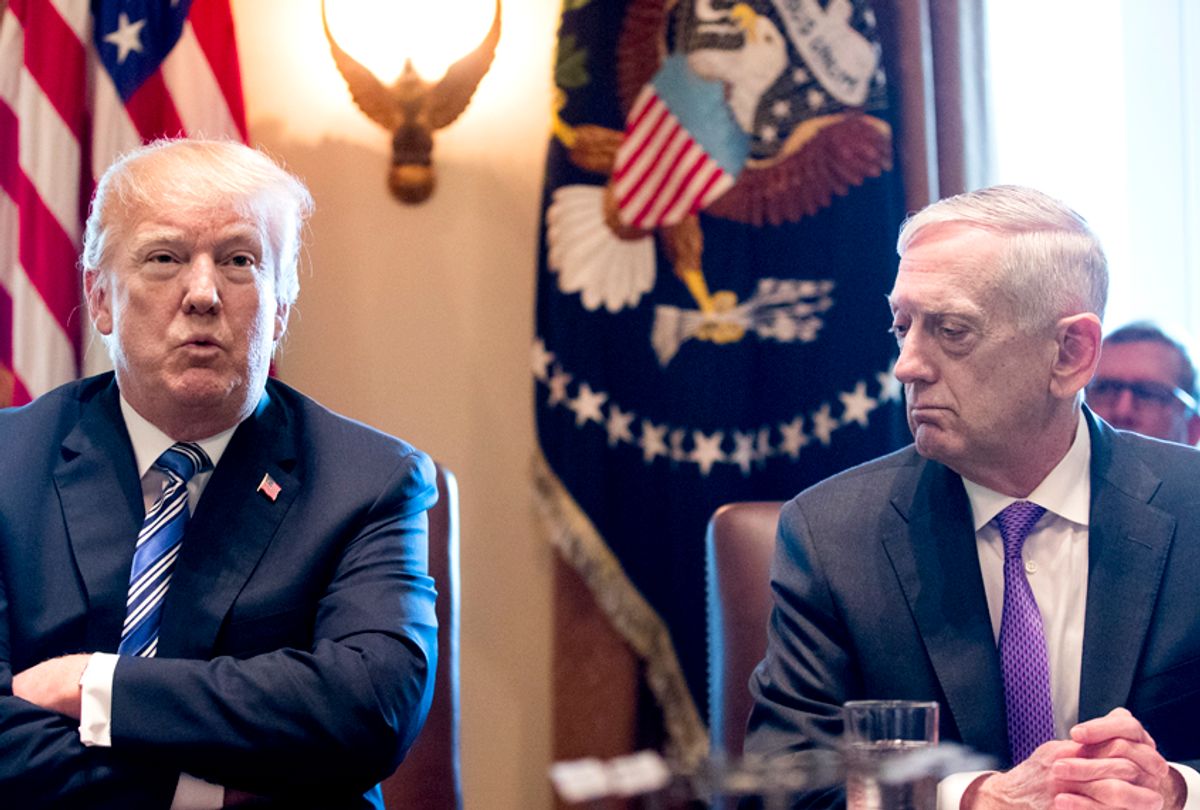 President Donald Trump took a potshot at his departing foreign policy adviser, Secretary of Defense Jim Mattis, in a Twitter post that implied his decision to hire the retired four-star general was motivated by pity.

"When President Obama ingloriously fired Jim Mattis, I gave him a second chance," Trump opined in a tweet on Saturday evening. "Some thought I shouldn’t, I thought I should. Interesting relationship-but I also gave all of the resources that he never really had. Allies are very important-but not when they take advantage of U.S."

This was the last in a trilogy of tweets that the president posted on Saturday about his controversial decision to pull out of Syria. His first tweet on the subject was a shot at diplomat Brett McGurk, who resigned from his position as Special Presidential Envoy for the Global Coalition to Counter ISIL to protest Trump's decision.

"Brett McGurk, who I do not know, was appointed by President Obama in 2015. Was supposed to leave in February but he just resigned prior to leaving. Grandstander? The Fake News is making such a big deal about this nothing event!" Trump tweeted.

His second tweet congratulated himself for supposedly doing well in Syria and again attacked the media, one of his favorite scapegoats.

"If anybody but your favorite President, Donald J. Trump, announced that, after decimating ISIS in Syria, we were going to bring our troops back home (happy & healthy), that person would be the most popular hero in America. With me, hit hard instead by the Fake News Media. Crazy!" Trump tweeted.

While Trump has insulted Mattis in the past — most notably when he described him as "sort of a Democrat" in an October interview with "60 Minutes" — this situation is different because it comes after Mattis resigned to protest Trump's decision to pull American troops out of Syria, a foreign policy maneuver that critics perceive as betraying America's allies and empowering a hostile authoritarian power, Russia. Bill Browder, an American-born British financier who has become a leading international advocate for harsher sanctions against Russia and has angered Russian President Vladimir Putin in the process, explained the dangers of Trump's Syria decision to Salon last week.

"It's an unfixable situation once it happens," Browder told Salon. "Basically we've been in a situation when the US didn't enforce the red line in Syria after Assad started using chemical weapons and they created a situation where we had to ask their permission to fly over certain parts of Syria. The troops that we have in Syria are there and established and give us some degree of latitude in that part of the world. The moment we pull out, that's it. We'll have to ask the Russians for permission to do anything in Syria. This is the best Christmas gift that Putin could have ever gotten from Trump."

At the same time, Mattis' departure carries with it the risk that it will leave Trump unmoored by any sense of foreign policy responsibility. Last year, when Salon spoke with veteran political operative and frequent presidential adviser David Gergen, he compared Mattis' role in the Trump administration with that of similar agents of stability who worked for President Richard Nixon during the nadir of the Watergate crisis.

"Nixon was the commander in chief, and [former Secretary of Defense Jim] Schlesinger in effect was saying, 'We’re going to override the commander in chief if in fact we think it’s coming from some sort of aggressive personality or he’s just pissed off. Whatever it may be,'" Gergen told Salon. "And I’ve asked people in the Defense Department, ‘Do you think there’s a similar arrangement today between [Secretary of Defense Jim] Mattis and the four-star generals?’ And the answer they’ve given me back -- I don’t think there’s any reason to believe he’s giving such an order ... [is] that if they’re given an order that they think comes from an erratic personality, they will double-check it with the secretary before they carry it out."