Is interactive TV the next big thing, or does the format force the same plot lines again and again? 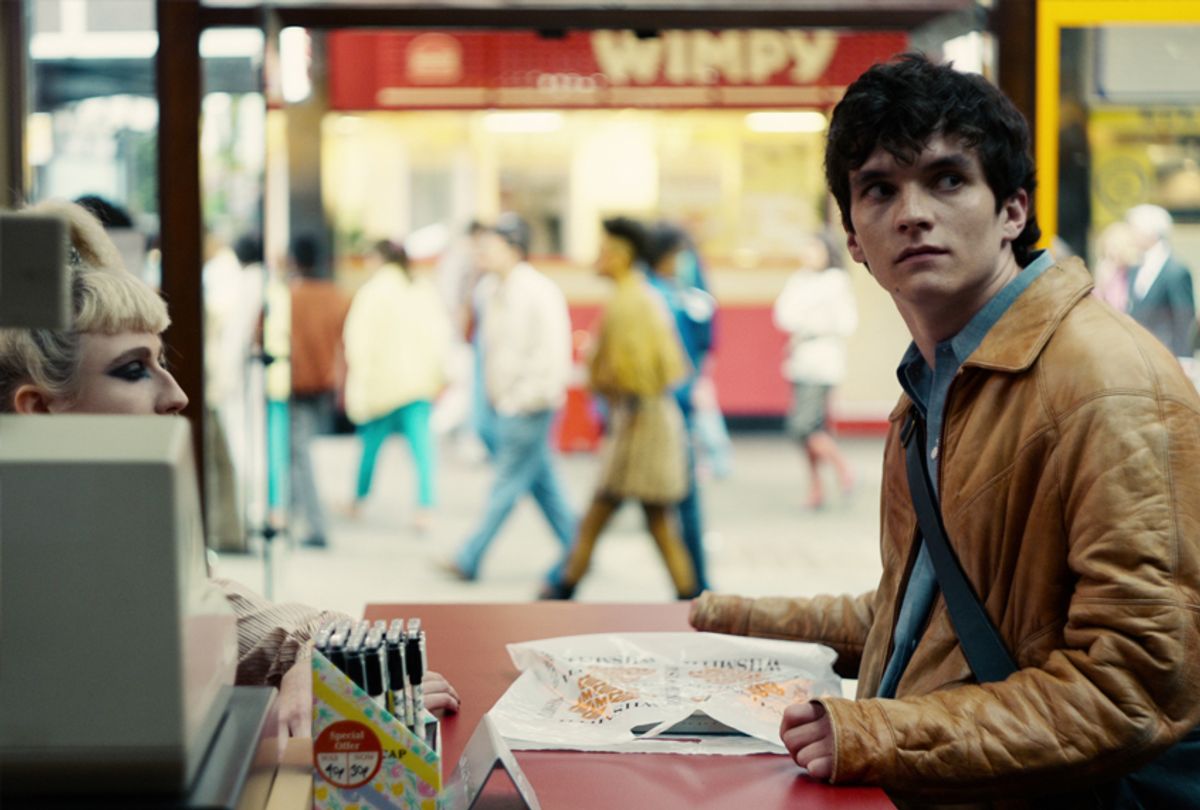 Perhaps you heard that Netflix released an interactive TV episode recently, in which the viewer picks between different story options using their remote — in turn affecting the story, which concerns a protagonist slowly devolving into madness as they realize they are being controlled by an outside viewer. The name of that show was "Puss In Book: Trapped in an Epic Tale," and it came out in 2017. But if that plot line sounds familiar, that's probably because it's pretty similar to another interactive Netflix show, "Black Mirror: Bandersnatch," which was released last week on December 28th.

The plot similarities between the two are not because "Black Mirror" creator Charlie Booker is a plagiarist of a kid's show. (To the contrary, reality has an unpleasant habit of plagiarizing from "Black Mirror," meaning the series' speculative fiction is frequently more prophetic than speculative.) Rather, it has more to do with the limitations of the interactive TV format. Interactive TV is close, but not exactly akin to a video game — as the remote control control lacks the fine motor skill interaction afforded by a joystick, touchscreen or even keyboard. And interactive TV is close, but not exactly akin to normal television: there's no one narrative path, and thus some of the anxiety of watching comes from one's desire to find the "winning" or "correct" pathway for the narrative. But unlike a video game, you don't have to slash up any dungeons or shoot any hell-demons to win. Pretty much the only thing you can do in this video game-lite format is pick between a couple options on the screen now and then. It's kind of like filling out an online survey.

Given the technical constraints, the narrative possibilities tilt towards the obvious: fourth-wall-shattering metatext. In the case of both "Bandersnatch" and "Puss in Book", that means the protagonist(s) are "aware" of the viewer, break the fourth wall, and the viewer is written into the script like another character. Because there haven't been too many forays into interactive film storytelling, that novelty alone is enough to keep the viewer's interest — even if "Bandersnatch's" story is riddled with cliche.

In other words, the experience is novel, even if the story isn't particularly memorable. While "Bandersnatch" is a faithful TV adaptation of the choose-your-own-adventure style of books that it references, those books have been around for decades. "Black Mirror" has managed to remain fiercely relevant, often prescient, because of its meta-commentary on the abuses of social media, virtual reality, surveillance and robotics. Previous episodes have had a reflexive relationship with the way we think about technology: invasive social media projects are often contrasted with the Black Mirror episode "Nosedive," about a world in which all social interactions are ranked and contribute to a social credit score.

Without giving away too much, "Bandersnatch" lacks the greater social import of previous episodes because of the restrictions imposed by the simple interactive format, which forces the plot into the trap of many choose-your-own-adventure stories — specifically, the protagonist questioning his or her own free will, wondering if they are being controlled by a greater outside power (in this and every case, the viewer). But because this scenario has been done to death in print — and even in the "Puss in Boots" episode that came out in 2017 — it doesn't break any new ground narratively, and falls readily into metatext cliches.

If you didn't take an undergraduate English course in postmodernism, here's a crash course to explain what I mean. In his 1984 book "The Postmodern Condition", French philosopher Jean-Francois Lyotard described postmodernism as defining a post-industrial world that was multipolar, and without a universal reference point — except for science and math. Medieval European cultures had religion that they clung to, that underwrote all discourse and society; lacking that, the only thing that bonded us together was quantitative thought, Lyotard mused. That meant that even ethics and morals were not necessarily universal: your perception of the world might be radically different than mine. Hence, truth was a more slippery thing than anyone supposed. You can probably see already how this foreshadowed a "post-truth" world and had all kinds of political implications, but in this case we are considering only postmodernity's affects on art, not on discourse.

The point is, around the 1960s and later, one started to see the effects of this cultural shift become apparent in literature and film. Postmodern literature and art may be characterized by a fractured perspective or an unreliable narrator. Sometimes, the works are self-referential, and employ the use of "metacommentary" or "metatext," meaning text that comments on or deconstructs the text itself — for instance, in Nabokov's "Pale Fire," or David Foster Wallace's "Infinite Jest," which has a hundred pages of endnotes that the reader must flip back and forth from as they read to really understand the whole book. Even hyperlinks in digital documents are a form of metatext: though unremarkable to us nowadays, web pages were once considered the premier postmodern artistic format. In the 1990s and early 2000s, futurists believed that we would enter a new realm of literature, dubbed "hypertext fiction" or "hyperfiction," that would be "the next big thing," as Paul LaFarge wrote in Salon in 2011. Intriguing, LaFarge's essay on why hyperfiction never took off mirrors many of the issues with interactive TV, now being hailed as the "next big thing" for film. "Too many of the early hypertexts relied on the novelty of their form to do literary work, particularly in the keeping-the-reader-interested department," LaFarge writes. "True, the hypertext offers you the puzzle-solving pleasure of making sense of the story, arranging the pieces in your head to see the whole mosaic, but why would you do that, if the pieces don't suggest a picture you care to see? Not every puzzle has an interesting solution."

It's been so long since postmodern literary devices — e.g. metatext, self-reference, unreliable narrators — came about that they're not particularly novel anymore. The first choose-your-own-adventure books came out in the 1970s. And, if I may get meta- for a second, the web page you're viewing right now is full of adjacent hyperlinks that allow you, the reader, to choose your own adventure in terms of what you will read next. Being able to interact with a story isn't that interesting anymore, and having a narrator aware that you're doing so may be kind of cheeky, but it's also cliche. Isn't that what video games are, a whole interactive genre designed solely around the prospect of the user being in control of the world?

What is nice about "Bandersnatch," though, is that the postmodern elements are more thorough than merely a self-aware protagonist. This is postmodern art through and through, as self-references are scattered throughout the program: there are visual callbacks to just about every other "Black Mirror" episode, in symbols and sometimes directly in dialogue or imagery. There are fan theories that a "shared world" exists within the "Black Mirror" universe — some previous episodes seemed to be part of a shared timeline — but given that this episode takes place in the 1980s, some of the references to future "Black Mirror" episodes don't really make sense. In the scenes in the video game studio Tuckersoft, there are posters on the wall for a game called "METL HEDD" featuring an image of a robot, which resembles the automated killbots from the "Black Mirror" episode "Metalhead." But why would a 1980s video game have predicted that those future killbots would exist? It doesn't really make sense, and seems to just be reference for the sake of reference.

Most incongruently, this is the only "Black Mirror" show I've ever seen that seemed to contain product placement.  (I take that back partly: there was a brief reference to "Netflix" in the "USS Callister" episode, which could have been taken as an advert for its home network.) The show has always been faintly anti-consumerist, if not overtly anti-capitalist — particularly in depicting how Silicon Valley's specific brand of techno-capitalism commodifies and dehumanizes us. In one of "Bandersnatch's" story choices, there's an extended reference to Netflix that even includes the viewer clicking the logo for Netflix on the screen. Inserting repeated cries of "Netflix? What is Netflix?" into the dialogue doesn't come off as cheeky, however, but weird  — especially for a show that went out of its way to invent fake brands and corporations that fit into its satiric worlds. Similarly, there are some 1980s cereal adverts in the episode that had me questioning whether they were paid promotions.

The point is, "Bandersnatch," unlike every other episode of "Black Mirror," doesn't present us with any profound commentary on technology or the human condition. And yet, "Bandersnatch" is still pretty fun to play. Ultimately, the "Bandersnatch" experience left me wondering if there are ways of telling a compelling interactive movie story that don't involve the same self-aware, self-referential cliches — or if this burgeoning genre's writers are stuck on a single, repetitive plot device, like a DVD on loop.