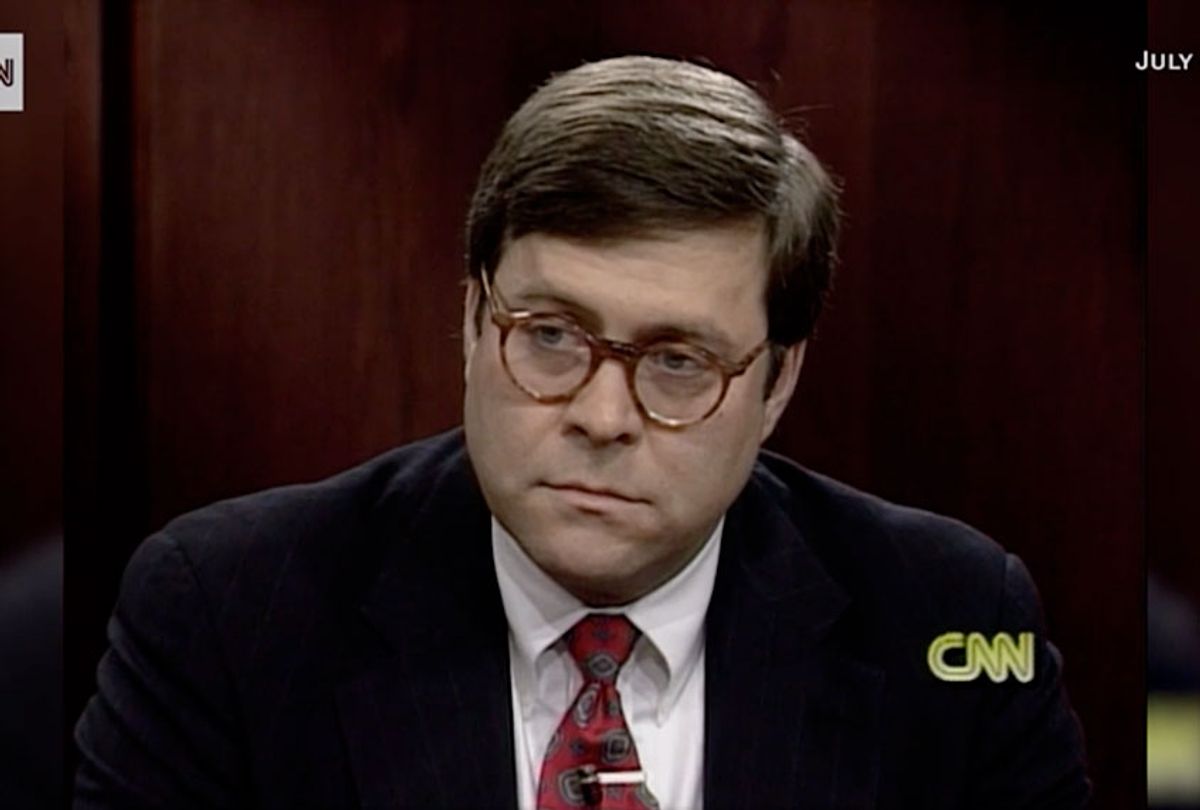 "I think that Roe v. Wade will ultimately be overturned," Barr said on CNN in an interview, which aired on July 4, 1992. "I think it'll fall of its own weight. It does not have any constitutional underpinnings."

Barr, who previously served as attorney general under the late President George H.W. Bush, a Republican, from 1991 to 1993, said the fate of abortion rights in the U.S. ultimately hung on future appointments to the Supreme Court.

"Over time, I think, and with further appointments to the Supreme Court, I think that the Roe v. Wade opinion will fall," Barr added.

The 1973 decision guaranteeing abortion as a right has been on conservative's target list since it was affirmed. It was bolstered by the Supreme Court in Planned Parenthood v. Casey, the 1992 case authored by Justice Sandra Day O'Connor, who was appointed to the high court by former President Ronald Reagan, a Republican. The decision was upheld by a 5-4 vote.

Two other Republican appointees, Justices Anthony Kennedy and David Souter, had voted to uphold Roe. In the CNN interview, Barr called them "so-called moderate justices." "I think they were wrong to do it," the said. "I think they should have stuck with the Constitution."

In response to Barr's unearthed comments, Dana Singiser, Planned Parenthood's vice president of public policy and government affairs, told Salon: "The attorney general is tasked with upholding our nation's laws and protecting our rights and freedoms — including the constitutional right to safe, legal abortion. The fact that William Barr does not believe in a woman's constitutional right to abortion is disqualifying from the start."

"How can the American people trust Barr to protect their rights when he wants to upend more than 45 years of Supreme Court precedent on abortion?" Singiser asked. "Planned Parenthood opposes the nomination of William Barr and calls on the Senate to reject his confirmation."

Barr is scheduled to testify at a confirmation hearing before the Senate Judiciary Committee next week. In his past interview with CNN, he vowed to continue calling for tan end to Roe.

"I think this department will continue to do what it's done for the past 10 years and call for the overturning of Roe v. Wade in future litigation," Barr said, because "the vote was worse than five to four several years ago, and we continued to go back to the court. And I think the defects of the current decision will become more and more evident over time."

Although Barr expressed a belief that the justices appointed to the Supreme Court could affect the fate of Roe v. Wade, he did note, "We don't select judges to decide one specific case" when making Supreme Court appointments.

This was not the first time Barr had spoken out against Roe v. Wade, CNN reported. During his confirmation hearings in front of the Senate Judiciary Committee in November 1991, Barr spoke about his anti-abortion view for the first time.

"I haven't take a position on it publicly, I don't believe," Barr said. "I do not believe the right to privacy extends to abortion, so I think that my views are consistent with the views that have been taken by the department since 1983, which is that Roe v. Wade was wrongly decided and should be overruled."

"You've given the first candid answer anyone has given on Roe v. Wade that I can remember in God knows how many years," Biden said. "I disagree with your view, but it is — it's astounding to me, and you're to be complimented. Thank you for being candid with us."

In the CNN interview, Barr said state legislatures should be able to restrict abortions. "I agree with the sentiment that the Supreme Court should not be the referee in this area," he said. "This is a decision that should be left to the state,."

It is unclear if Barr's position has changed since leaving the Justice Department. During a 2001 interview with the University of Virginia's Miller Center of Public Affairs, Barr said, "I'm anti-abortion myself."

Since Trump announced his intention to nominate Barr as attorney general last month, his choice has also come under scrutiny for criticizing special counsel Robert Mueller's ongoing investigation into allegations of collusion between Trump's 2016 presidential campaign and Russia. Earlier this year, Barr reportedly sent an "unsolicited memo" to the Justice Department, in which he criticized Mueller's probe. He said that Mueller's inquiry into potential obstruction of justice by Trump was based on a "fatally misconceived" theory that would threaten the presidency and the executive branch.

And it was also not the first time that Barr publicly criticized the probe, which he would likely oversee if confirmed. He told The Hill last year that "leaks" from the special counsel's office "raise questions as to whether there is an agenda" and suggested that Mueller's team was not politically "balanced," because some members had made political contributions to Democratic candidates. Notably, Mueller, who is leading the probe, is a member of the Republican Party.