Whitaker, a GOP partisan and Trump loyalist, previously wrote in an op-ed that he would "indict Hillary Clinton" 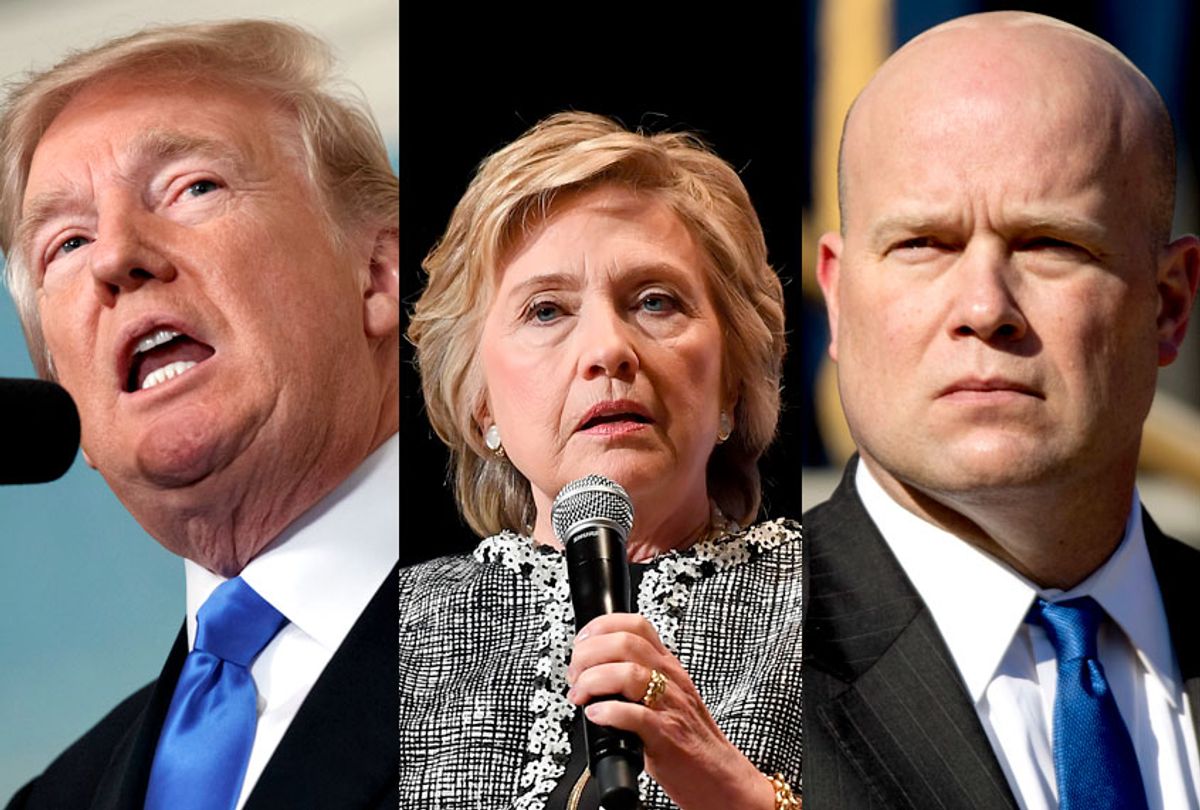 Whitaker, a GOP partisan and Trump loyalist, was appointed by the president earlier this month to temporarily replace Jeff Sessions after the commander-in-chief fired him from his job as the nation's top law enforcement official. Whitaker has previously demonstrated his willingness to stand by the president — most notably by defending him on CNN and writing in a USA Today op-ed that he would "indict Hillary Clinton."

The Times also reported that Trump allegedly wanted to compel the DOJ to prosecute both Clinton and former FBI Director James Comey this past spring. Then-White House counsel Don McGahn reportedly rebuffed the president, concluding that he did not have the authority to do so. While he had the authority to request an investigation, McGahn warned him that such a request would likely prompt accusations of abuses of power, according to The Times.

McGahan then had White House lawyers draft a memo for Trump warning that, if the president asked prosecutors to investigate his political adversaries, he could face a range of negative repercussions, including possible impeachment. "The encounter was one of the most blatant examples yet of how Mr. Trump views the typically independent Justice Department as a tool to be wielded against his political enemies," Times' reporters Maggie Haberman andMichael Schmidt wrote.

McGahn left his role as White House counsel in October after a tumultuous 21-month tenure. While White House Press Secretary Sarah Sanders claimed there is no backstory to McGahn's departure, the president was reportedly unnerved after it was revealed in August that he had "cooperated extensively" with special counsel Robert Mueller's ongoing investigation into allegations of collusion between Trump's 2016 presidential campaign and Russia. Trump, who reportedly did not know the full extent of McGahn's 30-hours worth of interviews with federal prosecutors, has repeatedly assailed the federal probe as a politically-motivated "witch hunt." McGahn was succeeded by Pat Cipollone, a longtime Washington commercial lawyer.

While it remains unknown whether Trump read McGahn's memo or whether he continued to pursue the prosecutions, The Times revealed that Trump continues to privately discuss the possibility of prosecuting Clinton and Comey. The president has also repeatedly expressed disappointment in FBI director Christopher Wray for not aggressively investigating Clinton, according to the newspaper.

The Times further reported that Trump has grown frustrated with Wray for not investigating Clinton's role in the Obama administration's decision to allow Russia's nuclear agency to buy a uranium mining company. Trump also privately requested that the DOJ investigate Comey for mishandling sensitive information and for his role in the Clinton email investigation, according to the outlet. However, that request was reportedly denied by law enforcement officials. Notably, Comey is a witness against the president in Mueller's ongoing probe.

McGahn's lawyer, William Burck, told The Times that McGahn "will not comment on his legal advice to the president." "Like any client, the president is entitled to confidentiality," Burck said. "Mr. McGahn would point out, though, that the president never, to his knowledge, ordered that anyone prosecute Hillary Clinton or James Comey."