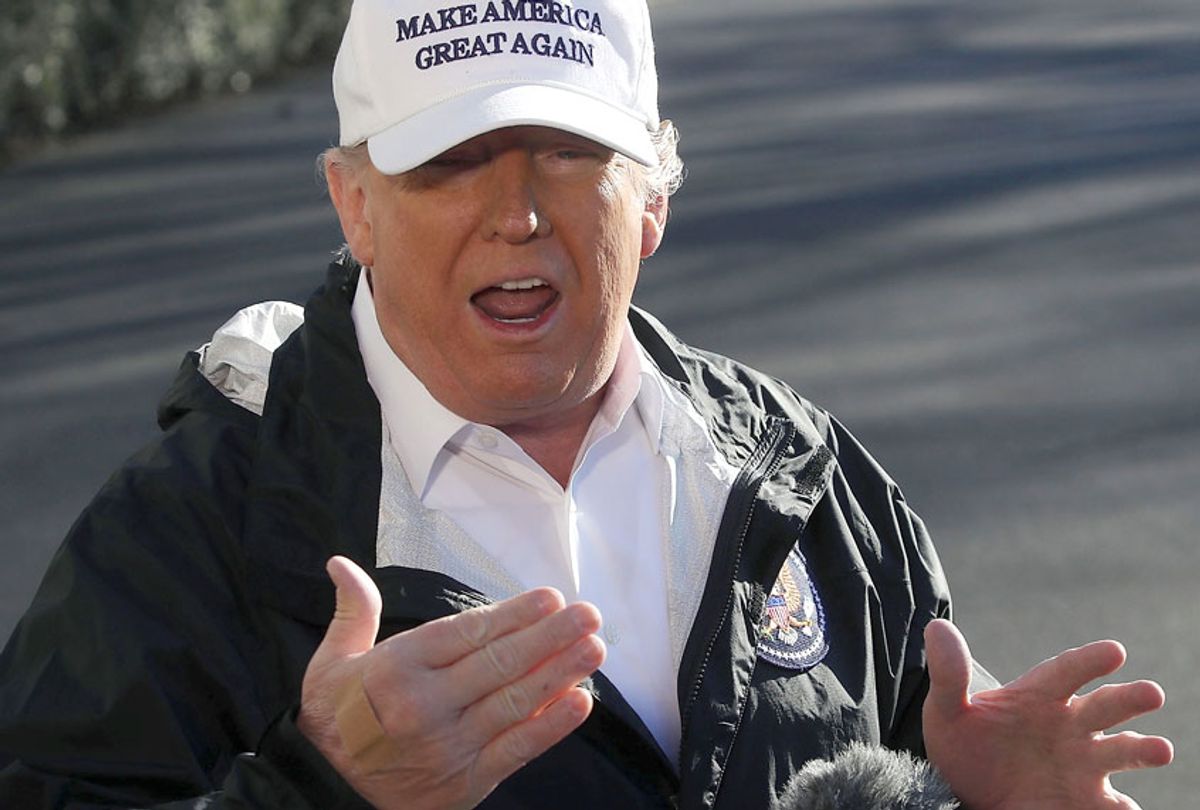 Donald Trump speaks to the media before departing on Marine One from the White House on January 10, 2019 in Washington, DC. (Getty/Mark Wilson)
--

As President Donald Trump and congressional Democrats continue to spar over funds to build a "wall" along the U.S.-Mexico border, with Trump threatening to declare a national emergency to fund the wall if Democrats do budge, the commander-in-chief claimed that he never promised Mexico would directly fund the project.

"Obviously, I never said this," Trump told reporters Thursday at the White House. "And I never meant they're going to write out a check."

Trump, in fact, repeatedly promised during the 2016 presidential campaign that Mexico would pay for the construction of his $5.7 billion "wall" along the southern border, and dozens more times since he took office. He also put it in writing, in a March 2016 memo, that was shared with news outlets and on his campaign website. The memo proposed threatening to block remittances being sent from Mexican nationals in the U.S. back to Mexico, which the campaign claimed amounted to $24 billion a year, if Mexico did not "make a one-time payment of $5-10 billion" for the wall.

Most recently, Trump told Fox News host Sean Hannity that he would likely declare a national emergency if he could not reach a deal with Democrats in Congress to fund his 2,000-mile border wall. The budget impasse over border wall funding has resulted in a partial government shutdown that has entered its 21st day, tying a record for the longest budget impasse in the U.S. It appears positioned to make history on Jan. 12, as negotiations to reopen the nine federal agencies, which have been shut down since Dec. 22, continue to stall. The longest government shutdown on record lasted from Dec. 5, 1995 to Jan. 6, 1995, when House Speaker Newt Gingrich, a Republican, and President Bill Clinton, a Democrat, faced off over taxes.

Earlier this week, Trump abruptly walked out of a closed-door meeting with congressional Democrats in the White House Situation Room, blasting the negotiations as a "waste of time" after newly-elected House Speaker Nancy Pelosi (D-Calif.) said she would not fund his border wall — even if he ended the government shutdown.

"Just left a meeting with Chuck and Nancy, a total waste of time," the president tweeted at the time. "I asked what is going to happen in 30 days if I quickly open things up, are you going to approve Border Security which includes a Wall or Steel Barrier? Nancy said, NO. I said bye-bye, nothing else works!"

For now, the government shutdown appears to have no end in sight — and hundreds of thousands of federal workers have had to look for other jobs as they face the reality of missing paychecks and the influence that will have on their lives.