Melissa McCarthy, as you haven't seen her: Why her "Can You Ever Forgive Me?" Oscar nod is a thrill

"Can You Ever Forgive Me?" is the Oscar contender you probably haven't seen, and it's more than worth seeking out 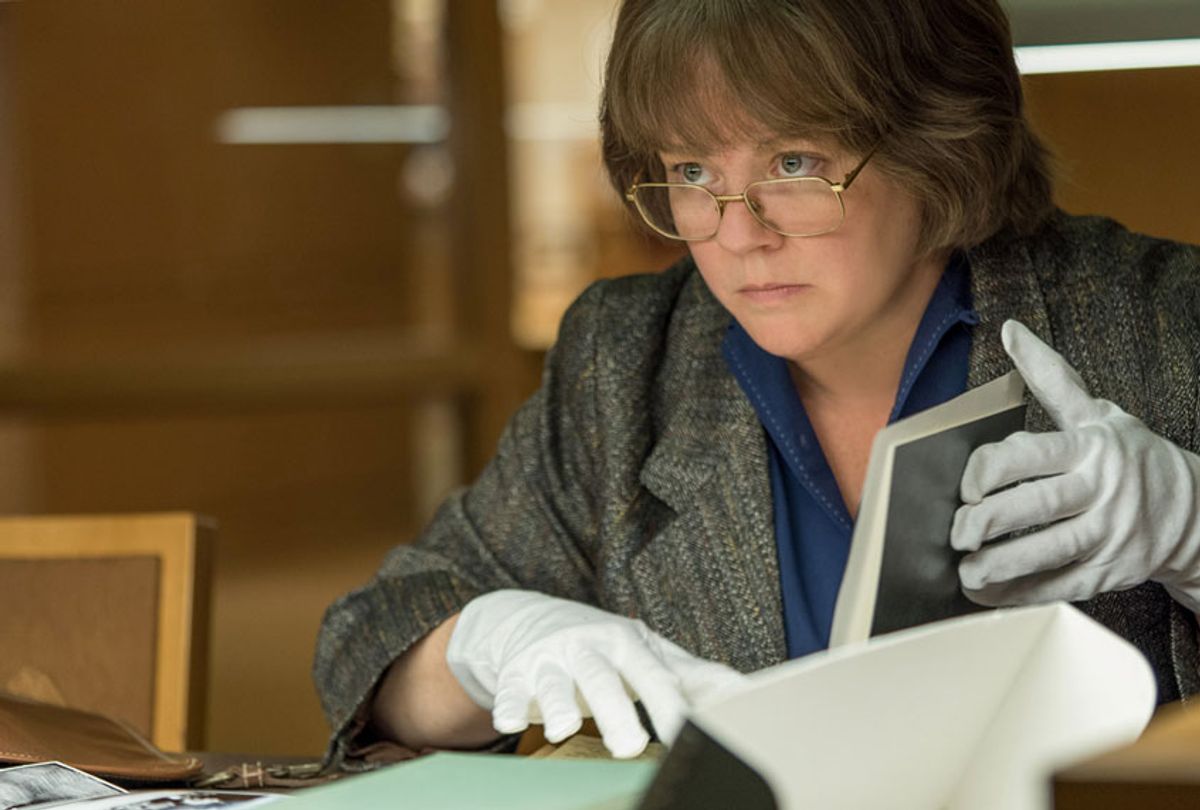 Melissa McCarthy in "Can You Ever Forgive Me?" (Mary Cybulski)
--

One of the most reliable delights of each year's announcements of the Academy Award nominations has got  to be watching an underdog get its due. Congratulations, then, to Best Actress nominee Melissa McCarthy, best Supporting Actor nominee Richard E. Grant, and Adapted Screenplay nominees Nicole Holofcener and Jeff Whitty for "Can You Ever Forgive Me?" — the most entertaining Oscar contender you probably didn't see.

Based on the memoir of the same name, the film stars McCarthy as Lee Israel, an alcoholic, slovenly, down on her luck and deeply antisocial author once known for her biographies of notable women. Years after her peak, down on her luck and consigned to the remainder table, Israel fumbles upon a unique method of acquiring both the income she needs and the validation she craves — literary forgery. Aided by her drinking buddy and co-conspirator Jack (Richard E. Grant), Israel gleefully dupes the collector market with clever, ribald and entirely made up correspondences from the likes of Noel Coward and Dorothy Parker — until, of course, word starts to get out that are some very convincing fakes floating around the market.

In theory, a literary caper set in Manhattan and starring America's sweetheart sounds like a sure thing. Yet the final product was anything but. After nearly a decade in the making, the film's original star, Julianne Moore, dropped out just six days before production was scheduled to start. In a domino effect, that led to its original director (and co-screenwriter) Nicole Holofcener stepping aside, leaving her to hand the project over to its new director Marielle Heller.

In October, the film opened to rapturous reviews and conservative distribution. In its first weekend, it earned what IndieWire called a "decent" showing of $150,000 across just five theaters. So if you missed it, it's because even at the widest point in its release, it was playing in 555 theaters across the country. It can be easy for films of this scale to go ignored at awards season. But perhaps the greatest surprise in its journey toward becoming a multiple Oscar nominee is the movie's authentically crabby heart.

Speaking with the Los Angeles Times last year, director Marielle Heller described "Can You Ever Forgive Me?" as  "a movie about loneliness and poverty and what it is to be a woman who's forgotten by society." Relatively early in her career, Heller already seems to have found her sweet spot in dramatizing already dramatized personal stories. Her first feature was 2015's haunting "Diary of a Teenage Girl," and her next one is the Tom Hanks Mr. Rogers movie, "A Beautiful Day in the Neighborhood." These are not necessarily topics that make audiences stampede toward the mall's cineplex.

There's still the prestige factor, though, right? Hollywood loves likable actors playing unlikable, cute actors playing ugly, and straight actors playing gay, and in that regard "Can You Ever Forgive Me?" delivers. But it doesn't believe itself heroic for any of those things. Is there anything more predictable than the astonished praise that accompanies a famous performer bravely doing a role that involves wearing dowdy clothes and losing/gaining weight to the point of becoming "unrecognizable"? McCarthy, in contrast, inhabits Israel without the resigned, "I'm not really this frumpy" bearing of certain other Oscar-kissed performances of the past several years.

The industry — not to mention audiences — also harbors a palate for stories that don't stray too far into their own unpleasantness. A just-curmudgeonly-enough vehicle like Best Picture nominee "Green Book" or just-nasty-enough one like fellow nominee "The Favourite" makes sense. But a movie about a foul-smelling, misanthropic, borderline hoarder? (Lee Israel would give Marie Kondo a heart attack.) A woman with all the charm of a broken beer bottle — and one who doesn't magically reveal a heart of pure gold by the time the credits roll? That is a tougher sell. The best metaphor for Israel's character can be found in a scene in which she is simultaneously unpleasant enough to get kicked out of a party she's crashed and invisible enough to steal a guest's coat on the way out. You don't see characters like that often. Not in the movies, anyway.

When I saw "Can You Ever Forgive Me?" last fall, I was immediately captivated with Lee and her friend's Jack's constant simmering rage, their casual amorality, and their very relatable fury toward rude book clerks. It was startlingly bracing. They scheme, they brazenly lie, they recoil from opportunities for sincere connection. They are neither misunderstood geniuses (like Best Actor nominee Willem Dafoe in "At Eternity's Gate") nor beautiful schemers (like Emma Stone and Rachel Weisz in "The Favourite"). They may be clever, but they are not secretly noble, because they're more like that person muttering angrily to herself next to you on a crowded train.

In the past year, Melissa McCarthy has also starred in "The Happytime Murders" and "Life of the Party," movies that eluded acclaim but were consistent with the actress's image as a comic performer with a flair for slapstick. That her range is significantly greater than those vehicles would suggest is not surprising to anyone who's been following her career the past several years. But with a previous Oscar nomination for her comedic chops in "Bridesmaids," it's safe to say that her image has not been as a "serious" actress. That deserves to change. As for Grant, his performance evokes his star-making role in 1987's "Withnail and I" — a character who is desperate, pompous, inebriated and confounded by an unholy domestic mess. Thirty-plus years on, how satisfying to see him as exasperated as ever.

But what makes "Can You Ever Forgive Me?" truly special is not its individual parts but the crackling, easy dynamic of McCarthy and Grant together. It takes supremely confident storytelling to let characters be who they are, to not succumb to sentimentality or to easy, black and white thinking. To make us root for them without them displaying more than a shred of likability. To tell a tale of deeply flawed people, discovering in each other another frustrated soul to be lonely with.

"Can You Ever Forgive Me?" feels particularly apt right now, as a tale of ego and identity. What do you do if you're a person who simultaneously craves anonymity and adulation? For Lee Israel, the answer was to become the original analog catfisher, a grumpy, drunken cat lady who could successfully make people believe she was Louise Brooks and Fanny Brice. At her typewriter, she could be anyone. On the sidewalks of New York, you'd never glance at her twice. "I still consider the letters to be my best work," she once said. Israel's fakery was her legacy. And her story is one of the most unique, unforgettable movies of the year.