Can Elizabeth Warren can sell her bold new plan to tax the rich? Why not? Everybody loves it — except the rich 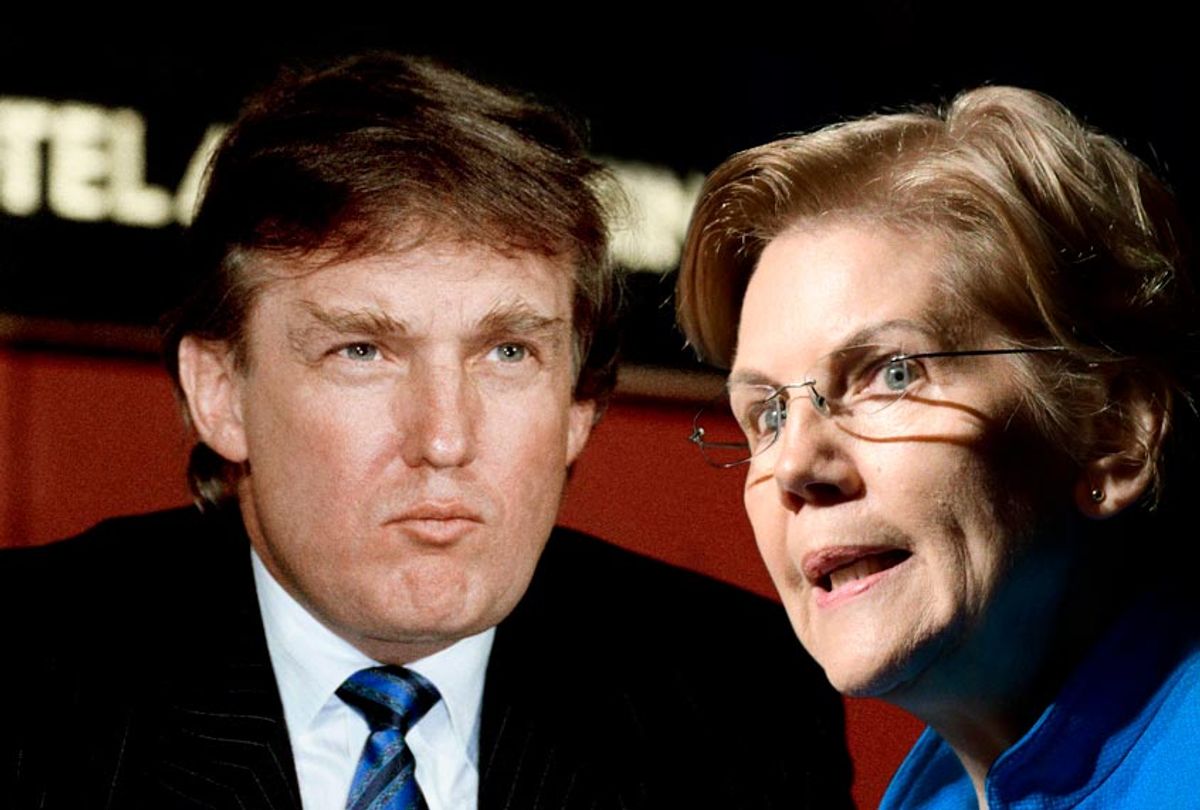 After announcing her bid in an awkward New Year’s Eve rollout, the Massachusetts senator enjoyed a week in the national media spotlight before a number of other Democratic contenders jumped in the already crowded race. On Thursday, her first big campaign proposal was inadvertently boosted upon arrival by the very billionaires her plan targets.

Warren’s proposal to adopt an annual wealth tax for the first time ever would hit the richest of the rich just as they appear more out of touch than ever.

Arriving right on time, Warren’s plan to break up the growing concentration of wealth and power in this country came on the same day that several Trump administration officials offered a series of astonishingly tone-deaf statements dismissing the financial struggle of millions of Americans.

Warren's proposal also dropped on the same day that the most expensive home in U.S. history was sold — a $238 million Manhattan penthouse purchased by perpetual property collector and hedge fund billionaire Ken Griffin. Hours before Warren released her plan, Commerce Secretary Wilbur Ross -- himself not quite a billionaire, suggested that federal workers forced to work without pay during a partial government shutdown simply seek low-interest loans.

“People might have to pay a little bit of interest,” Ross clarified, “but the idea that it’s a paycheck or zero is not a really valid idea.” His personal fortune is estimated at $700 million, although (like his boss in the White House) Ross spent years claiming to be much wealthier than that.

President Trump, who until Friday refused to reopen the government without funding for his pet border-wall project, insisted on Thursday that local grocers will simply work out payment plans to aid hungry federal workers in the interim. His chief economist, Larry Kudlow, told reporters on Thursday that government employees working without pay during the shutdown were “volunteering” out of “their love for the country and the office of the presidency and presumably their allegiance to President Trump.”

Also on Thursday, Fox News released a poll finding that a majority of voters favor a tax on the wealthy to spend more on programs such as infrastructure, national defense, education, and health care, rather than another tax cut. Voters in the Fox News poll support tax increases on families making more than $10 million annually by a whopping 46-point margin, 70 to 24 percent. In the survey both lower- and higher-income households favor raising taxes on millionaires, and even a majority of self-identified Republicans support higher taxes on incomes over $10 million.

So Warren's plan is far from radical. It's mainstream.

It is worth noting that Warren’s tax plan, unlike the much-hyped 70 percent marginal tax rate proposed by newly-elected Rep. Alexandria Ocasio-Cortez, D-N.Y., would be a tax on assets, not just income. According to the economists who crafted the candidate’s proposal, her plan is meant to discourage the hoarding of wealth by the über-rich.

Warren plans to impose a 2 percent tax on Americans with more than $50 million in assets and a 3 percent tax on those with more than $1 billion in assets. That could garner as much as $2.75 trillion over a 10-year period, by from taxing roughly the 75,000 richest families in the nation. Additionally, a one-time tax penalty would be imposed on those who have more than $50 million in assets and attempt to renounce their U.S. citizenship. That could generate $2.75 trillion over a decade, according to Emmanuel Saez and Gabriel Zucman, the  Berkeley economists who advised Warren on the plan.

But with such widespread support from the public for the basic premise, this debate will be less about the minor details and more about maintaining the lofty rhetoric. Warren's push will need to be  aggressive and assured, without playing into Republican charges of divisiveness. With the introduction of such a bold policy prescriptive, Warren is setting the grounds for debate — and already shifting the Overton window on socioeconomics prominently to the left.

As expected, the push-back has come fast, furious and frenzied.

The National Review declared the plan unconstitutional. A group of constitutional professors released a letter through Warren’s office explaining why that argument is wrong.

To be fair, there are substantive criticisms of the plan. Nicol Kaeding and Kyle Pomerleau argue that Warren is proposing “poorly targeted taxes on capital.” Her plan does not preclude an increase in the capital gains tax, however, or the addition of a death tax on capital gains. It is precisely these untaxed capital gains that have driven the buildup of generational wealth concentrated in the hands of a few dynastic families.

There has also been strong praise for Warren's plan.

"It’s an idea that’s well-crafted for our time," wrote Jared Bernstein, a former chief economist to Vice President Joe Biden. "One that promises to add fairness to an unfair tax code, raise significant, much-needed revenue and push back on the historically high level of wealth concentration in the United States."

Still, Warren clearly must be prepared for her loudest critics to lob shallow critiques.

While Warren’s announcement borrows the language of Bernie Sanders’ 2016 campaign, blaming billionaires who have rigged the system for the myriad issues that ails middle-class Americans, she has long walked the walk on this issue.

“I’ve spent my career getting to the bottom of why America’s promise works for some families but others who work just as hard slip through the cracks into disaster, and what I’ve found is terrifying,” she said in her announcement video. Warren agreed with famed economist Thomas Piketty when he proposed such redistribution of wealth in 2014. In turn, Pikkety endorsed her plan on Thursday.

But perhaps most important of all in sales terms, Warren’s plan was first proposed by none other than — Donald J. Trump.

Back during his first serious flirtation with running for the White House -- as a Reform Party candidate in the 2000 campaign -- Trump released an economic plan centered around a one time 14.25 percent tax on “net worth” over $10 million.

"By my calculations, 1 percent of Americans, who control 90 percent of the wealth in this country, would be affected by my plan," Trump said at the time. "The other 99 percent of the people would get deep reductions in their federal income taxes."

By going back in time to steal Trump’s old rhetoric on wealth redistribution, Warren may be able to shift the entire discourse around wealth and taxes, forcing 2019 Trump to leave his comfortable perch as No. 1 culture warrior to deal with substantive issues.

“Republicans have won the economic messaging debate for decades,” notes Princeton professor Lauren A. Wright, a political communication expert. “They have successfully capitalized on fears Americans have of an intrusive government, socialism and wealth redistribution, and polling still indicates Americans believe Republicans are better equipped than Democrats to deal with the economy and taxes.”

This isn’t to say that the hyperbolic fear-mongering that conservatives have perfected can't yet sink Elizabeth Warren. But a conversation about taxing the rich will never be as divisive and petty as the dangerous “political correctness” debates that Democrats -- so often devoid of true substance on the campaign trail -- have allowed Republicans to dominat. That alone is a win.

Warren can rebut critiques of class warfare by calling out the gaslighting. The class war has already begun.

As the Washington Post notes, economists who support Warren's plan say that the wealthiest 1 percent of families currently face a total tax burden, including state and local taxes, of about 3.2 percent relative to wealth. But the "bottom 99 percent of families currently has a tax burden of 7.2 percent relative to their wealth."

Warren does risk going too far with her rhetoric at times. An “eat the rich” tone may turn off moderate voters who otherwise agree with her policy. As Wright puts it, “Warren's proposal will excite progressive Democrats, but the negative framing of it, as retribution against the rich for ‘rigging’ the economy in their favor, also gives Republicans an invitation to return to their classic playbook.”

Warren would be better off, Wright suggests, with a positive twist, emphasizing that her plan to tax the rich “is aimed at helping working Americans,” not punishing others.

In other words, she just has to stick to Donald Trump's plan. People like it.