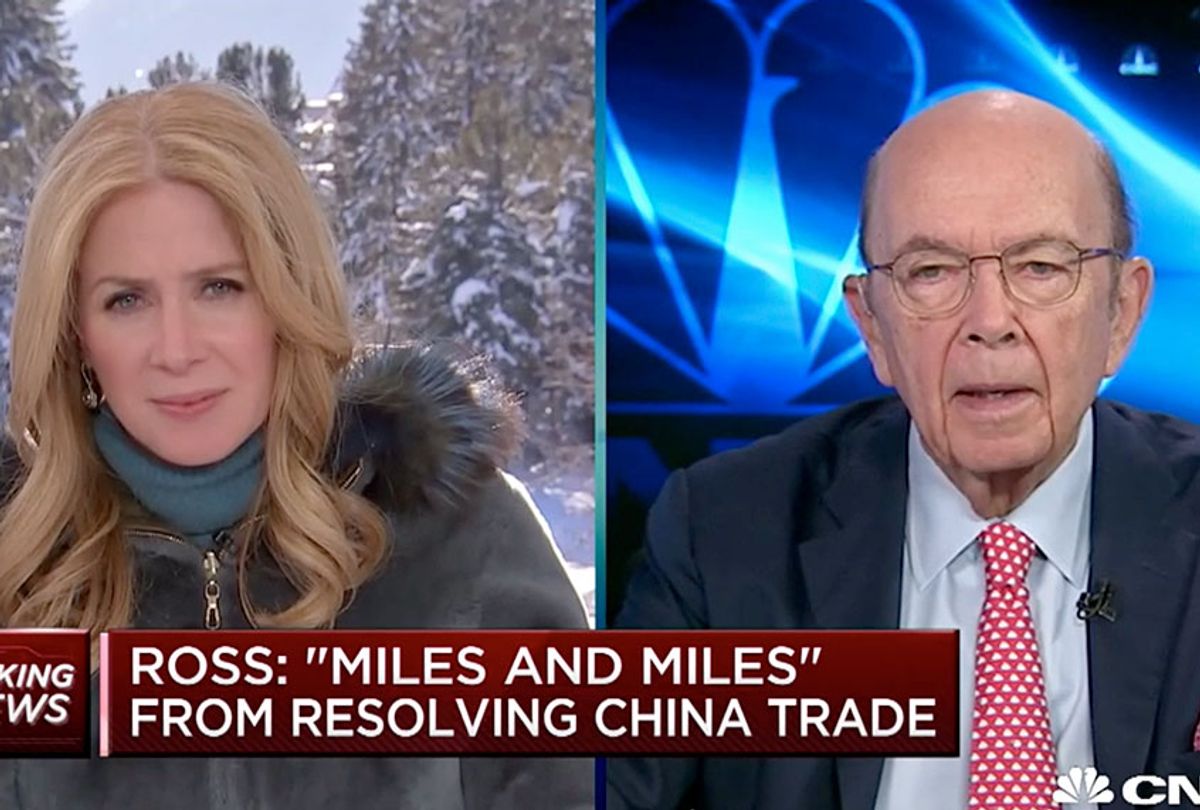 Commerce Secretary Wilbur Ross on Thursday dismissed the ongoing partial government shutdown's impact on the hundreds of thousands of federal workers either furloughed or working without a paychecks, suggesting they should simply take out loans until they get paid to cover their bills.

Ross, a billionaire and former investor, told CNBC's "Squawk Box" that he does not understand why some of the more than 800,000 unpaid federal employees need to rely on food pantries or other government nutrition programs after missing paychecks amid the monthlong shutdown, which entered its 33rd day on Thursday.

"There are reports that there are some federal workers who are going to homeless shelters to get food," host Andrew Ross Sorkin said.

"Well, I know they are, but I don't really quite understand why. Because, as I mentioned before, the obligations that they would undertake, say borrowing from the bank or credit union, are in effect federally guaranteed," Ross replied. "So the 30 days of pay, which some people will be out – there's no real reason why they shouldn't be able to get a loan against it."

Alex Karp, CEO of Palantir Technologies, a major government contractor working on behalf of the Pentagon and the Defense Department, told CNBC on Wednesday that the shutdown is "damaging for the American brand." Asked about Karp's comments, Ross called them a "hyperbole" and claimed that the hundreds of thousands of federal employees who currently are working without a paycheck would not damage the overall gross domestic product, or GDP.

"I think that's a great deal of hyperbole," Ross said. "Put it in perspective: You're talking about 800,000 workers. And while I feel sorry for individuals who have hardship cases, 800,000 workers if they never got their pay ― which is not the case ― they will eventually get it. But if they never got it, you're talking about a third of the percent on our GDP. So it's not like it's a gigantic number overall."

Trump and House Speaker Nancy Pelosi (D-Calif.) have been embroiled in an intense showdown over the partial government shutdown, which began shortly before the Christmas holiday, over Congress' inability to pass a spending package that includes the $5.7 billion Trump has claimed is necessary to construct a "wall" along the U.S.-Mexico border. Trump and congressional Democrats continue to spar over funds to build a wall along the southern border, with Trump threatening to declare a national emergency to fund the wall if Democrats do not budge. The shutdown, as it currently stands, appears to have no end in sight and has entered its 34th day, making it the longest budget impasse in U.S. history. Meanwhile, negotiations to reopen the nine federal agencies, which have been shut down since Dec. 22, continue to stall.

Similar to Ross, Trump last month attempted to downplay the government shutdown's impact on workers either furloughed or working without pay, alleging they are "Democrats."

"Have the Democrats finally realized that we desperately need Border Security and a Wall on the Southern Border. Need to stop Drugs, Human Trafficking, Gang Members & Criminals from coming into our Country," Trump tweeted at the time. "Do the Dems realize that most of the people not getting paid are Democrats?"

Just days before alleging the federal employees working without pay are Democrats, the president argued that federal workers support his stance in the bitter budget standoff over border wall funding.

"Many of those workers have said to me and communicated, 'stay out until you get the funding for the wall,'" he said, when asked for his message to the hundreds of thousands of federal workers either furloughed or working without pay.

"These federal workers want the wall," he added. "The only one that doesn't want the wall are the Democrats."