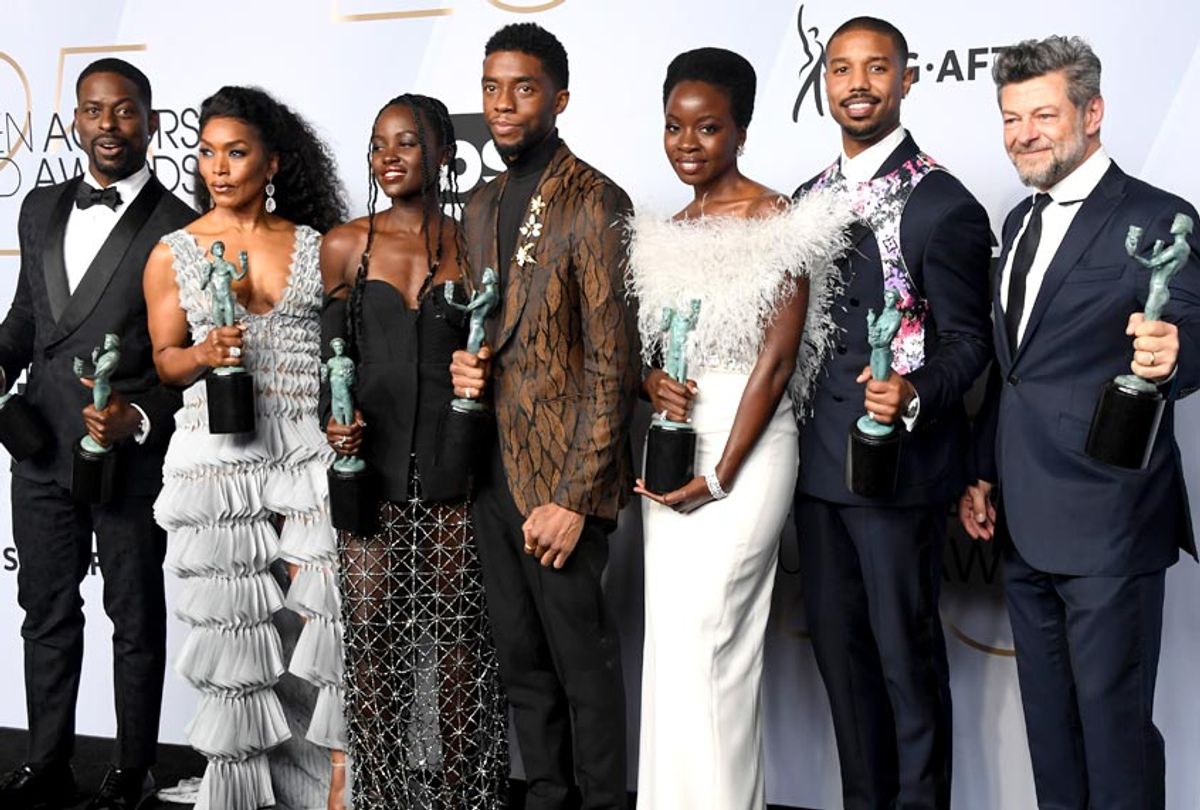 "Black Panther" has been an inspiring superhero film for so many audiences across the country and globe, shattering box office records and launching "Wakanda Forever" into the popular lexicon. But on Sunday night, after the "Black Panther" actors won the SAG Award for outstanding performance by a cast in a motion picture, star Chadwick Boseman spoke eloquently about what "Black Panther" means to him and the cast of mostly black artists, specifically.

"Well I'll be," Boseman said, grinning, stroking his chin and staring out into the crowd in awe, who gave the cast a near-standing ovation. "I didn't think I was going to have to speak."

The actor, who played T'Challa/The Black Panther, said when he reflects on the process of "Black Panther," he remembers "the passion, the intelligence, the resolve, the discipline, that everybody showed." But Boseman said he also thinks about two questions that each cast member was asked repeatedly following the film's acclaim and box office success: Did they suspect "Black Panther" would garner this universally positive response? And has it changed the film industry for good?

Boseman's moving words come after the success of a film that has already made history over and over again, in the box office, in the diversity of its cast and crew, in it being the first superhero film to be nominated for Best Picture at the Academy Awards, all while taking on big themes that are painfully relevant like racism, sexism, colonialism, war and domination, and collective versus personal responsibility. That "Black Panther" has shifted the culture at large seems like a given. But has it changed the film industry? That's a more complicated question.

The Best Picture nominees at the Oscars reflect a spectrum of both where Hollywood could go as it moves forward when it comes to race, gender, storytelling and representation as well as  ideas and perspectives the film industry has long celebrated, and which frankly feel regressive in 2019. While the many nominations of Best Picture nominees "Black Panther," "BlacKkKlansman," and "Roma" are momentous, "Green Book" and "Bohemian Rhapsody" serve as deafening reminders of who Hollywood has always centered in its stories. White-washing and queer-erasing are as enduring of Hollywood staples as biopics are.

The rise of streaming services and independent releases signal that some of Hollywood's gatekeepers are becoming less powerful. And in a year in film that boast not only "Black Panther," but also "Sorry to Bother You," "Crazy Rich Asians," "The Favourite," "Ocean's 8," "Proud Mary," "Widows," "Annihilation," "A Wrinkle in Time," "To All the Boys I've Loved Before," and "If Beale Street Could Talk," "Black Panther" feels more like the face of a movement — one that is not tethered to any single award or individual, but indicative of a collective shift in front of and behind the camera of who's telling stories and whose stories are being told.

This isn't to romanticize the very real battles facing equality in the industry, nor the intense opposition and reluctance much-needed diversity still faces. No women directors were nominated for Oscars in either the Best Picture or Best Director categories this year, and a recent study found that the percentage of female directors working on top-earning films dropped significantly in 2018.

And the fact that we're still celebrating firsts — Janet Mock as the first transgender woman of color to write and direct an episode for TV, or Sandra Oh as the first Asian woman to host the Golden Globes (and only the second to win a best actress in a TV drama award) — shows just how much catching up Hollywood still has to do. But such feats, which come on top of the aforementioned film releases, as well as too many incredible shows to list, along with the work of Time's Up, also demonstrates the power of creatives who have historically been marginalized in the entertainment industry both demanding and implementing change. The message of 2018 is that they are done waiting.

Over the weekend, it was announced that Time's Up has come up with a challenge for Hollywood to commit to working with a woman director on a feature film in the next year and a half to begin to repair the gross disparity that currently exists. This comes after Oscar-winning actress Frances McDormand encouraged her peers to implement inclusion riders in their contracts last year — an initiative which Warners Bros and its sister companies, HBO and Turner, adopted in September, becoming the first major Hollywood studio to do so — and Regina King promising, during her acceptance speech for the Golden Globe for best supporting actress, that over the next two years all of the projects she leads will include at least fifty percent women.

In Boseman's SAG speech on Sunday, the show tried to cut him off by playing the not-so-subtle get-off-the-stage music, but the actor remained determined to finish his point. "It's a pleasure to be celebrated by you, to be loved by you," he said. The feeling is so mutual.

Whatever happens on Oscar night, "Black Panther" is already a winner; more importantly, the film is a trailblazer, and its relevance will continue to ripple far beyond the reach of this award season. Hopefully "Black Panther" will be remembered as a meaningful turning point in Hollywood, buoyed by all of the 2018 releases amplifying the stories we need to see told, and marking just the beginning of what's to come.