Sandra Oh saved the Golden Globes: The good, bad and ugly of the 2019 awards

The 76th annual Golden Globes was largely pointless and lacked an Oprah Moment. But at least we had Sandra Oh 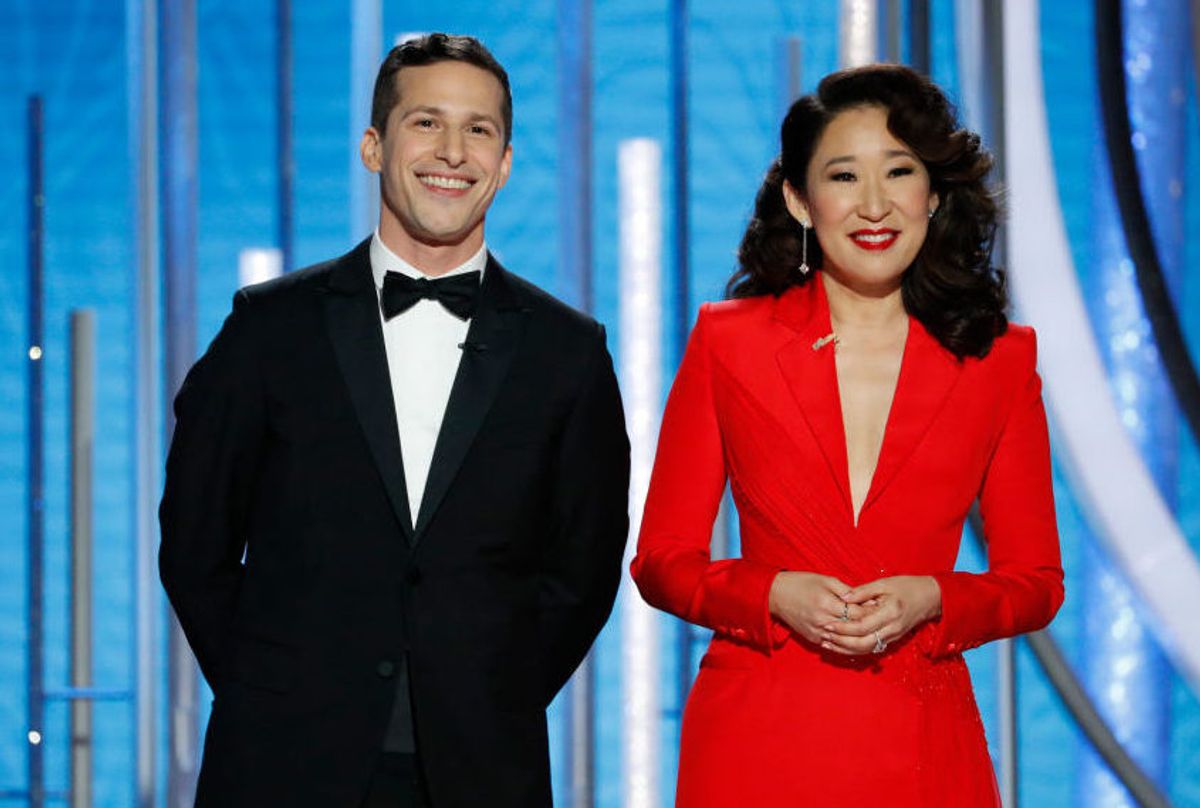 Generally speaking, any Golden Globes telecast is a fairly low stakes affair for people who write about television. Unlike film category nominees, individual and series wins in TV categories have zero impact on Emmy odds. Therefore when Hollywood Foreign Press Association voters get a few of the TV awards right, it’s nice, I guess. But mostly their choices are meaningless or downright baffling.

No, the reason television folk tune in to the Golden Globes is to watch the hosts navigate the drunkenness. Ricky Gervais set the standard for going at the audience harshly, while the team of Amy Poehler and Tina Fey produced a force of (good) nature that was tough to top.

And then we have Andy Samberg, “Saturday Night Live” alumnus and “Brooklyn Nine-Nine” star, paired with “Killing Eve" lead Sandra Oh for Sunday’s 76th Annual Golden Globe awards telecast. On paper, the combination was . . . unexpected. Onstage, it was a misfire almost in a James Franco-Anne Hathaway-hosting-the-Oscars way — but kinder and gentler.

Samberg’s comedy shoots and misses through the evening were plentiful, but perhaps the dumbest was a pre-commercial break gag where, instead of food, nurse practitioners circulated with syringes of flu vaccine.

Despite these oddball interludes, Oh charmed her way out of total disaster quite often. The producers’ mistake was in relying upon Samberg, the comic half of the duo. Certainly Samberg’s overly-hammy delivery, and the terrible writing with which they were saddled, didn’t help Oh’s punchlines. But she had a few great ones, and when her jokes landed they were terrific.

Besides, the memorable part of their laugh-free monologue was meant to be serious.

She then addressed several members of the audience. “Because I see you, and I see you.  All these faces of change.  And now so will everyone else.”

Yes. One would think. If only the 76th Golden Globes had employed a better director. We couldn’t see the “you” to whom Oh was referring, even though this speech was clearly planned. That was a problem. So, at first, her very moving and earnest words were met with a few giggles. Audience members couldn’t tell if she was being serious.

Sunday’s telecast held a number of moments like that. Oh made a joke about white people playing Asians, and from the audience we could barely hear someone (identified by Twitter as "Aloha" star Emma Stone) yell out, “I’m sorry!”

Best Comedy Actress winner Rachel Brosnahan gave a shout-out to the "matriarchy" responsible for this year’s Best Comedy winner “The Marvelous Mrs. Maisel,” and the camera did not cut to Amy Sherman-Palladino or even Amazon's studio head Jennifer Salke. Instead the audience was treated to the reaction of the company’s “matriarch” Jeff Bezos.

That’s the rub of any Globes: even a bad show gives the audience plenty to talk about. However, Sunday’s show did provide an interesting a view of where we are a year after Cecil B. DeMille winner Oprah Winfrey levitated the collective consciousness for a few minutes with a declaration of the beginning of a new era. Remember that? In her view, the uncontested reign of corrupt men was on the verge of ending. Their time is up, she said, and we were entering an era in which gender inequity would at last see a decline.

One year out, how accurate did her prediction prove to be? The answer is a mixed bag.

Placing Oh front and center as the first Asian to host the Globes feels like progress, and this was even before she won a Globe for Best Actress in a TV Drama for “Killing Eve,” making her only the second Asian woman to win that award. The first was in Yoko Shimada, who won in 1981 for “Shogun.”

But then, the HFPA also rubber-stamped a Globe for four-time winner, nine-time nominee Michael Douglas for his work in Netflix’s “The Kominsky Method,” which also won for Best TV Comedy. “Kominsky” is a fine series, but it bested “The Good Place” and “Barry,” both of which are more creatively adventurous and skillfully realized. And Douglas’ Globe denied both Donald Glover and Bill Hader a shot.

In the animated film category, “Spider-Man: Into the Spider-Verse,” the superhero story featuring the first Afro-Latinx Spider-Man,  Miles Morales, came out on top.

Mahershala Ali and Regina King, like Oh, were the only people of color nominated in their categories, and each walked away with individual awards for best supporting actor and actress for “Green Book” and “If Beale Street Could Talk.”

King made headlines by using her acceptance speech time to publicly declare, “in the next two years, everything I produce is going to be 50 percent women.” And we witnessed Glenn Close (15 times a nominee) win her third Golden Globe for her work in “The Wife,”  a film about a woman whose brilliance is subsumed by her husband’s career.

Olivia Colman, winner for Best Actress in a Musical or Comedy, earned laughs by referring to Emma Stone and Rachel Weisz, her co-stars in “The Favourite,” as “my bitches” from the stage, after she thanked Melissa McCarthy for sharing one of the ham sandwiches she sneaked into the ceremonies.

Meanwhile Christian Bale, who won the Best Actor Globe for his portrayal of Dick Cheney in “Vice,” used his platform to thank Satan "for giving me inspiration on how to play this role." And this year's Cecil B. DeMille recipient, Jeff Bridges, largely distinguished himself with a kindly, rambling speech that made many on Twitter wonder how high he was.

Much of the night shaped up like this, granting surprises and shrugs in typical Globes fashion: “The Americans” finally and deservedly won Best TV Drama to mark their final season. “The Assassination of Gianni Versace: American Crime Story” won the Globe for Best Limited Series, beating “Sharp Objects” and “Escape at Dannemora.”

Similarly satisfying was Darren Criss' win in the Limited Series actor race. On the other hand, we were robbed of getting Billy Porter of “Pose” grace us with his victory speech — or, rather, Porter was robbed in the Best Actor in a TV Drama competition by Richard Madden of Netflix’s “Bodyguard.” So, for that matter, was “Americans” star Matthew Rhys.

Then again, Sunday’s awards show also graced us with the legendary Carol Burnett, lovingly introduced by Steve Carell. The comedy pioneer lived up to Carell's edited joke that she makes Tom Hanks “look like an asshole.”

Burnett, the inaugural recipient of a lifetime achievement award named in her honor, accepted the award with gratitude and humility while admitting, with regard to her long run with “The Carol Burnett Show,” that she was incredibly fortunate to be there at the right time.

“What we did then, it couldn't be done today,” she said, referring to the show’s 28-piece live orchestra, dozen dancers, even more costumes changes and the standing repertory of players including Tim Conway, Vicki Lawrence, Lyle Waggoner and Harvey Korman.

“Nothing like our show . . . could ever see the light of day today because, the networks, they just wouldn't spend the money and because there are so many cable competitors.  They are not going to take a chance,” Burnett said.  "And it's sad to say today's audiences might never know what they are missing.  So here's to reruns and YouTube!”

The entertainment industry is a cyclical environment, as Burnett says and Oh acknowledged in the part of the opening monologue that mattered. If the emphasis last year was on rising up, on resistance, the 2019 Globes drove the marker in the sand declaring, however temporarily, that changes are in sight, ignoring once again how easily the ground shifts when nobody is playing attention.

That is a recipe for complacency — not on the part of King or Oh or any of the other women striving to even the playing field, but among those who might look at a few wins here for movies telling comfortable stories about social justice that the work is done.

Accepting the award for “Green Book,” Peter Farrelly declares, “All we have to do is talk and to not judge people by their differences, but look for what we have in common.  And we have a lot in common.  We all want the same thing.  We want love.  We want happiness.  We want to be treated equally.”

The entertainment industry has been selling this message in some form or another for as long as the Golden Globes have been in existence. And Oh is correct. Next year could and very likely will be different. She knows this not only from experience, but based on what we saw on Sunday.

Not all of it was great. Most of it, in fact, wasn’t. But the good moments, the very rare and few ones worth remembering, were real.