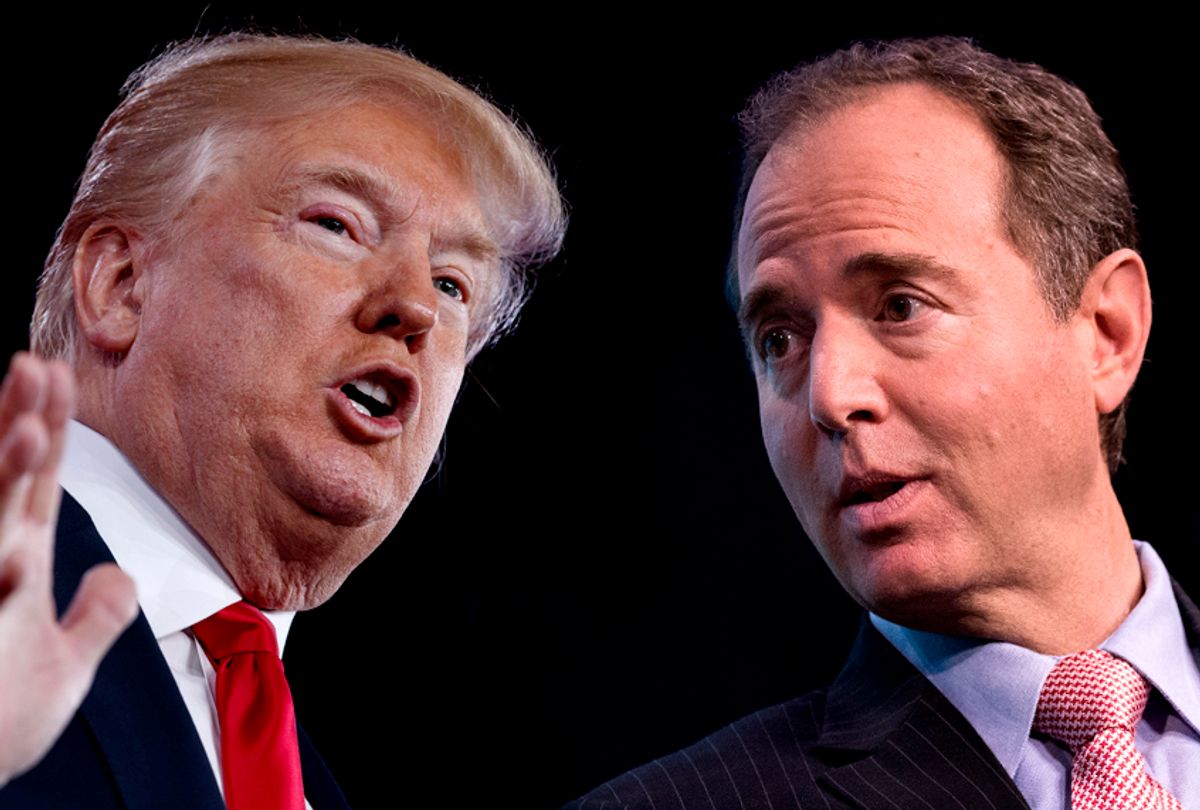 President Donald Trump warned Democrats not to investigate him and his administration on Tuesday in his second State of the Union address, saying that "ridiculous" investigations could potentially hinder the passage of federal legislation and the economy.

"An economic miracle is taking place in the United States — and the only thing that can stop it are foolish wars, politics or ridiculous partisan investigations," Trump said as Republicans cheered and Democrats sat stone-faced.

"If there is going to be peace and legislation, there cannot be war and investigation," Trump continued. "It just doesn't work that way."

But that did not stop House Intelligence Committee Chairman Adam Schiff (D-Calif.) from announcing less than 24 hours later that his committee would continue to investigate Russia's actions during the 2016 election and contacts between the Russian government an Trump's team, as well as "whether any foreign actor has sought to compromise or holds leverage, financial or otherwise, over Donald Trump, his family, his business or his associates."

Schiff said the investigation, which could involve additional congressional committees, would "allow us to investigate any credible allegation that financial interests or other interests are driving decision-making of the President or anyone in the administration."

"That pertains to any credible allegations of leverage by the Russians or the Saudis or anyone else," Schiff told reporters following the House Intelligence Committee's first meeting in the new Congress, according to CNN. The investigation, Schiff said, would also explore whether Trump or his associates have "sought to influence U.S. government policy in service of foreign interests" and any potential obstruction into the various investigations.

Trump dismissed Schiff's announcement on Wednesday by calling the Democrat a "political hack" who is "trying to build a name for himself."

"It's called presidential harassment, and it's unfortunate," Trump claimed. "And it really does hurt our country."

Also on Wednesday, the House Intelligence Committee took its first action in the new Congress, voting to send more than 50 interview transcripts from its Russia probe interviews to Robert Mueller, the special counsel who is investigating Russian interference in the 2016 election and allegations of collusion or obstruction of justice by the commander-in-chief. Mueller could potentially use these transcripts to pursue charges of perjury.

The committee already sent one transcript to Mueller in December after the special counsel's office requested a transcript of Roger Stone's interview. Federal prosecutors accused Stone of lying to the committee in his seven-count indictment last month.

Schiff has said that he wanted Mueller to obtain the transcripts to see whether any other witnesses who appeared before the committee committed perjury. The transcripts are likely to be transmitted by the end of the day, Schiff said, per CNN.

The House Intelligence Committee was previously controlled by Republicans in the last Congress. At the time, Schiff tried to send the unredacted transcripts to Mueller's team, but Republicans blocked his motion, arguing that Mueller had not requested them. The interviews that will now be sent to Mueller's team include Trump's eldest son Donald Trump, Jr.; son-in-law and senior White House advisor Jared Kushner; and senior campaign aides Corey Lewandowski, Steve Bannon, Brad Parscale, Jeff Sessions and Hope Hicks. According to NBC News reporter Tom Winter, "there are 67 unclassified and classified transcripts that will be released," which will total over 7,000 pages.