Ann Coulter scorches Donald Trump: "The only national emergency is that our president is an idiot" 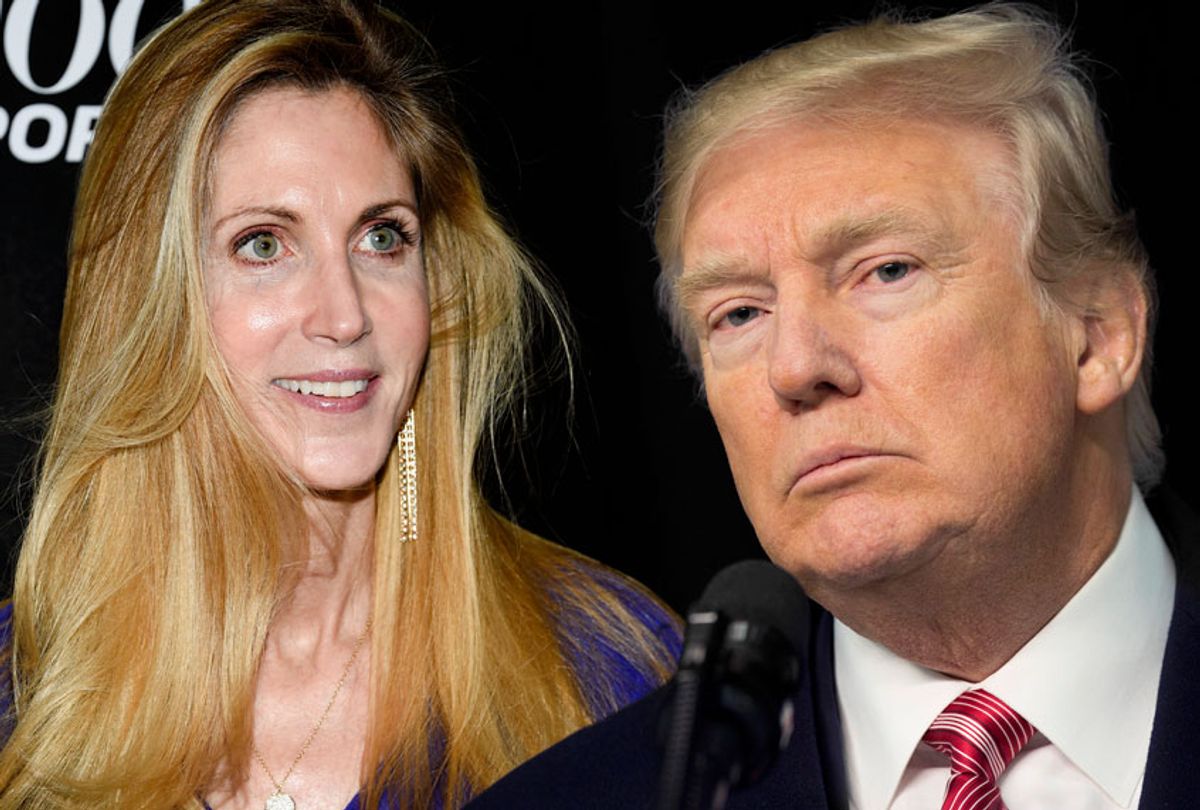 Ann Coulter said she was thankful President Donald Trump distanced himself from her on Friday after he let the author and conservative commentator down once again by signing a bipartisan border deal while simultaneously declaring a national emergency to fund his long-promised wall along the U.S.-Mexico border.

"I haven't spoken to her. I don't follow her. I don't talk to her, but the press loves to bring up the name 'Ann Coulter,'" the president said Friday morning during a televised press conference in the Rose Garden at the White House as he described his relationship with the right-wing pundit who has introduced him at events during the 2016 presidential campaign.

Trump's statement came after he was asked Friday whether conservative commentators influenced his decision to declare a national emergency at the nation's southwestern border. Fox News host Sean Hannity and other conservative media personalities urged the president to declare a national emergency over the past few months and railed against him for ending the government shutdown without securing the funds he claimed were necessary to construct his wall. Trump rejected the notion that conservative commentators decided policy for him and pushed back against reports that he shut down the government or declared an emergency at the border at their behest.

"Probably, if I did speak to her, she would be very nice. But I just don't have time to speak to her," Trump said of Coulter, before saying he thought she had gone "off the reservation" when it came to her sharp criticism of him.

"He seems to think 'the reservation' is HIM, not his campaign promises," Coulter wrote on Twitter following Trump's press conference.

Coulter had a more scathing response to Trump's declaration during a radio interview Friday with John Phillips and Jillian Barberie on KABC's "The Morning Drive" show.

"Thank God he's relieved me any responsibility for what he's been doing," Coulter, the author of 2016's "In Trump We Trust: E Pluribus Awesome!," told the radio hosts. "That was the biggest favor anyone could do for me today."

Coulter revealed she was sleeping during Trump's press conference and she had heard his comments for the first time on KABC. Declaring that "the country is over" now, she said did not need to watch Trump's event live or to go to a tarot reader to know that Trump would "totally f**ked over his base."

Coulter, an early and vocal Trump supporter, claimed Trump's "presidential mandate" was to build the wall — and although that is what he plans to do by declaring a national emergency, she was not pleased with it. Coulter added thatTrump was "digging his own grave," and his supporters "fell for his BS."

"The only national emergency is that our president is an idiot," she declared.

Coulter also said Trump would have a very difficult time winning a second term next November.

"I can't imagine any way to get out of this," she said. "I would like to hope that there is. I don't think there is. In which case, no, of course he can't run for reelection."

Coulter also called Trump a "lazy" and "incompetent" president, who is surrounded by "absolute morons" like Jared Kushner and Ivanka Trump, "who have no experience in government."

Coulter has previously criticized the president over his slow progress on a border wall. She also mocked Trump in December when the White House announced it would accept a spending package that did not include the $5 billion Trump had requested for the wall.

"The chant wasn't 'SIGN A BILL WITH B.S. PROMISES ABOUT "BORDER SECURITY" AT SOME POINT IN THE FUTURE, GUARANTEED TO FAIL!' It was 'BUILD A WALL!'" Coulter tweeted at the time.

Shortly after, Trump announced he would not sign a funding bill that did not provide money for the border wall, sending the country into the longest government shutdown in U.S. history over border security. Trump and Congress passed a 1,169-page bipartisan spending package that included $1.375 billion for 55 miles of new border fences — a snippet of the $5.7 billion Trump has sought for more than 200 miles of steel walls along the southwestern border. Conservative commentators expressed frustration to the bipartisan agreement and pushed Trump to declare a national emergency.

Trump declared that national emergency on Friday, noting that he expected a legal challenge during his Friday press conference, while also signing that bipartisan deal to avert a second government shutdown.

Coulter was not pleased with the agreement. She wanted funds appropriated by Congress for the wall and cast doubt that an emergency declaration would be enough.

"No, the goal of a national emergency is for Trump to scam the stupidest people in his base for 2 more years," she tweeted early Friday morning. "The goal is to get Trump's stupidest voters to say 'HE'S FIGHTING!' No he's not. If he signs this bill, it's over."