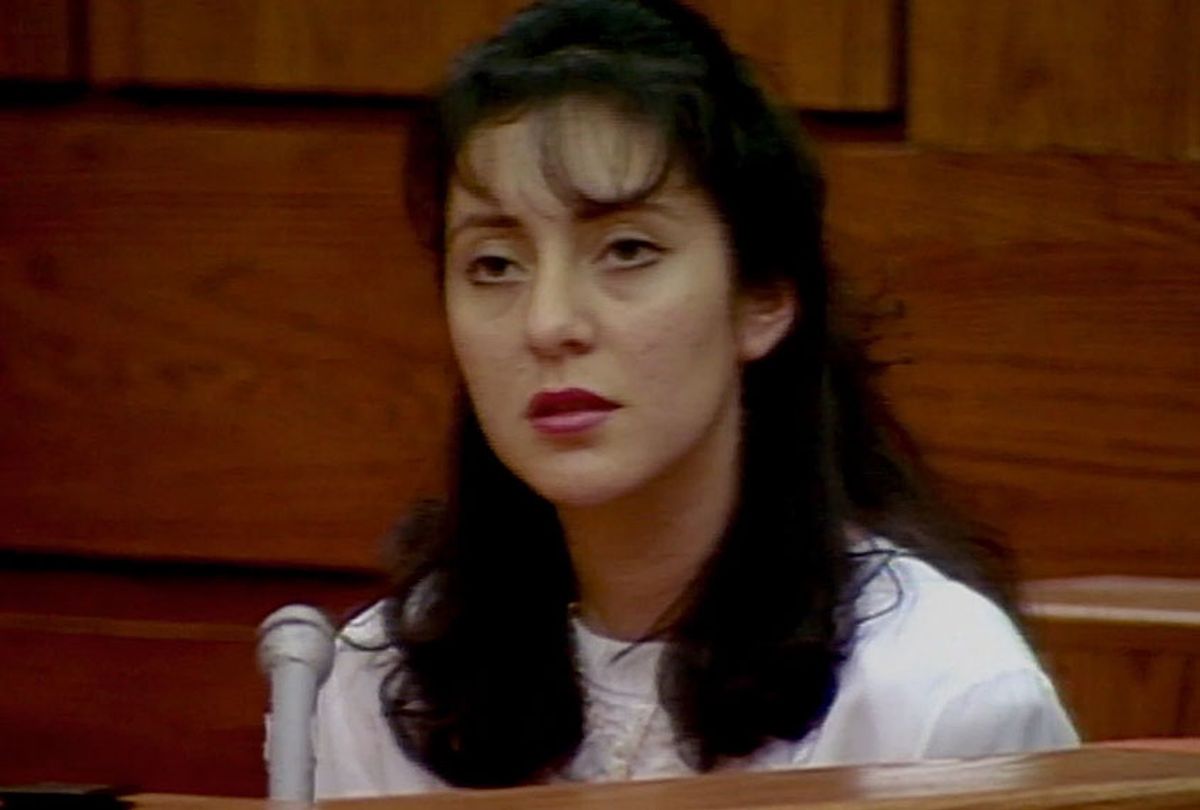 "Lorena,” Amazon’s four-part true crime examination of the tabloid-driven media feeding frenzy surrounding the crime and subsequent trial of Lorena Bobbitt, is one of those documentary series that feels inevitable. Consider that in 2016 the world was invited by way of "The People v. O.J. Simpson: American Crime Story" to consider anew that infamous case, its rippling impact upon broadcast journalism, and what the trials outcome told us about America’s race and class divisions and the outsized roles fame and wealth play in our justice system.

The revival of O.J. mania gave rise to similar if less successful attempts to rekindle interest around the unsolved murder of JonBenet Ramsey and the murder trial of Erik and Lyle Menendez. But a main reason those failed to hook broad interest is that these cases were about singular mysteries — shocking and bewildering felonies in a TV world where entire networks spin entertainment out of shocking, bewildering felonies.

The curious case of John Wayne and Lorena Bobbitt pre-dates O.J., and began with a mauling bizarre and ferocious enough to scream its way into national headlines, and resonates to this day, as "Lorena" makes its streaming platform debut nearly 26 years after the deed while a man accused of sexual assault occupies the White House.

Memory may have faded this duo into little more than pop culture trivia. But thanks to history, as it is sculpted via docuseries director Joshua Rofé and Jordan Peele, who serves as its executive producer, "Lorena" proves substantially kinder to Lorena than her ex in no small part due to the climate in which it comes into public view. The circumstances surrounding the Bobbitts' story contain within them the seeds of #MeToo and female rage. Lorena's presence on the witness stand during her trial, and the act that put her there, provide dramatic case studies in why women must be believed when they report rape and abuse. The public's treatment of her pain as entertainment, and her husband using his mutilation to build a career out of starring in such classics as "Frankenpenis," speaks volumes as to how seriously we take claims of abuse when the case in question intertwines those all-American blockbuster drivers of sex and violence.

“Lorena” doesn’t go out of its way indict any single party in the Bobbitt case, choosing instead to allow Lorena, as she is today, to guide us into understand who she really was. Besides, the archival footage of the media’s breathless coverage of the case, video of the court testimony, snippets from daytime talk shows and talk radio, and the subjects themselves amply signify where the filmmaker’s sympathies lie.

Make no mistake, though —John has his say, but he does not come out of this smelling of roses. One couple who knows them is sweetly comical even as they damn him with snark, describing memories of John’s behavior toward his wife and the inconsistency of what they know of him compared to the persona built for public consumption. John, for his part, is a crumpled man unapologetic in making the most of his miraculous post-op phallus. During an interview conducted in the present day, he tells an anecdote about a bull kicking him the place where he was “operated on.”

For the title subject it would take almost three decades before vindication would even come into view, and even after digesting "Lorena" the court of public opinion is likely to remain split.

Surely few were inclined to be sympathetic to Lorena Bobbitt in the weeks immediately following June 23, 1993. In the early morning hours of that day Lorena got up and left the bedroom she shared with John, retrieved a sharp knife from the kitchen of their Manassas, Virginia apartment, returned to their marital bed and sliced off his penis.

She then jumped into their car with the severed member and blade and hied away to a local field, where she returned it to nature by flinging it out of her driver's side window, one imagines with all the ceremony of a dissatisfied fast food customer tossing a balled-up burger wrapper onto a highway shoulder.

The knife received the considerate disposal of a useful object: she tossed it into a trash can near the nail salon where she was employed.

When her case goes to trial the charge in question is, appropriately enough, malicious wounding, a charge that carried a punishment of up to 20 years in prison. Left unclear all this time later is whether Americans can appreciate the extent to which her act made real a primal, angry desire lurking within an entire gender made to suffer indignities, physically violent and psychological, largely in silent and without recompense.

As more details emerged and courtroom live-feeds showed the country exactly what it was we were looking at, this News of the Weird showstopper eventually splashed America’s woeful disregard of domestic abuse and women’s rights across front pages and into newscasts. That is, only to a point. As  the National Network to End Domestic Violence president Kim Gandy points out, any hope that Lorena Bobbitt's story could serve to increase coverage of domestic violence and elevate understanding as to how sustained abuse could drive a woman to commit such shocking violence soon vanished.

"The public was so entranced by the act that they just couldn't really focus on anything else," she said.

Concurrently, of course, came examples of gender inequities we’re only now beginning to appreciate on a broader scale, exacerbated by convenient stereotypes goosed up to sell trash mags and keep us glued to Court TV.  Newspaper photos show John as a square-jawed man, a Marine who married an Ecuadorian immigrant. In return, according to initial accounts from friendly character witnesses, she abused him. Lorena wasn’t just any fury wronged by a man but a hot-blooded Latin termagant. Even otherwise (mostly) respectable publications played up that stereotype but few hit on it harder than (who else?) Geraldo Rivera.

And oh, what comedy sprung forth from imaginings about that disembodied  piece of flesh, too! As the opening episode reminds us, it was immortalized in one of David Letterman’s Top 10 Lists. “¿Dónde es el shlongo?” croons Adam Sandler’s Opera Man on an episode of “Saturday Night Live.” A-list comics Whoopi Goldberg and Robin Williams wrapped sets around it.

But “Lorena” gets all the ancient, cheap punchlines of the way expediently in the opening episode, swiftly making a beeline to the heart of why the separate and related cases of John Wayne and Lorena matter, even now.  And Rofé structures the series with a top-down approach, leading with a rewind through the stories we know, mostly involving John.

At the starting line “Lorena” lays out the perspective of his defense attorney who assures the public, then and now, that in his estimation his client appeared to be incapable of lying. (We later find out he was never paid after the ride was over.) The jury was convinced enough to acquit John of charges brought against him by the state related to claims of spousal abuse and marital rape.

But this dissolves into mist by the second and third episodes in light of Lorena’s gripping testimony, a halting, agonizing account of regularly forced sodomy on top of other descriptions of abuses. His defense team brings friends that testify to having witnessed Lorena lash out at her husband in public; hers brought male witnesses who recounted his casual bro talk about liking to force sex on women. On the stand Lorena, at times, can barely formulate answers to counsel’s questions. She, too, wins a non-guilty verdict, except hers comes with a mandated stay at a local mental health facility, a requirement of the state’s charge. The nation watched all of this.

Part of the messaging here — subtle, but at times as blaring as a pharmaceutically-enhanced erection — is how dominant the phallus as an instrument of patriarchy remains in our culture. Footage of a Howard Stern telethon concretizes this by way of a bikini-bottomed model stroking a gigantic replica of tumescent prick, serving as the arm of a fundraising meter for Mr. Bobbitt. (It ends up netting $190,000.)

Rofé stacks clips like this, along with nightly news reports and various profiles of John’s recovery atop one another, focusing on the disproportionate attention paid to question about his post-op functionality.

Newscasts capture him supposedly hiding away from the public on a ranch out West, playing cowboy. On a talk show appearance Todd Biro, one of John’s brothers, declares he would have killed her if he’d been present when the crime occurred, saying, “She took away the thing that means the most to a man.” His verbalized fantasy of murdering Lorena, by the way, earns thunderous applause from the audience.

Even as Lorena’s accounts of abuse took a central role in the narrative, her estranged spouse was more concerned with milking his 15 minutes of notoriety than laying claim to some measure of decency, if not dignity. America played along and made him a celebrity.

In this regard “Lorena” joins several recent true crime documentary series in inviting us to examine how willingly we  allow certain types of people to get away with just about anything short of murder.

Generations of cultural conditioning have trained us to excuse the terrible behavior and deeds of morally deficient men, and equally as damaging, to believe their lies — or worse, to accept that if they are lying, there’s a good reason for it. The purported handsomeness and charisma of serial killer Ted Bundy charmed law enforcement officials to leave him unsupervised and unshackled in a room, enabling him to escape. At a trial for one of his murders,  the judge and media treated him like a movie star.

It’s only natural, I suppose, that the history of Lorena Bobbitt has for the better part of nearly three decades been defined by a man who terrorized her with his body and his status as a good-looking man who cleans up well and, according to his lawyer, is “incapable of lying.”

Perhaps, then, the most appropriate justice “Lorena” grants its main subject is in the way it validates an immigrant’s resilience via a platform that fueled her determination in the first place. Yes, it is an immigrant’s tale, too: Her journey to America was a birthday gift, and her discovery of this new country was through the mythology sold to her by daytime soaps and prime time sitcoms like “Growing Pains” and “Family Ties,” shows that depicted America as a place full of loving families, romance and plenty.

During the darkest points in Lorena Bobbitt’s trial, when the prosecution offers a plea deal with a light sentence, she refuses it, opting to tell her story to the best of her ability and risk 20 years in prison. To plead guilty to a felony would automatically remove her chance at attaining citizenship, Lorena explains, adding — even while recalling her starring role in a media-generated nightmare —  that she refused to allow her abuser to force her to give up her American dream.