Napolitano said that if Trump called Whitaker and asked him to obstruct the investigation, that is "corrupt intent" 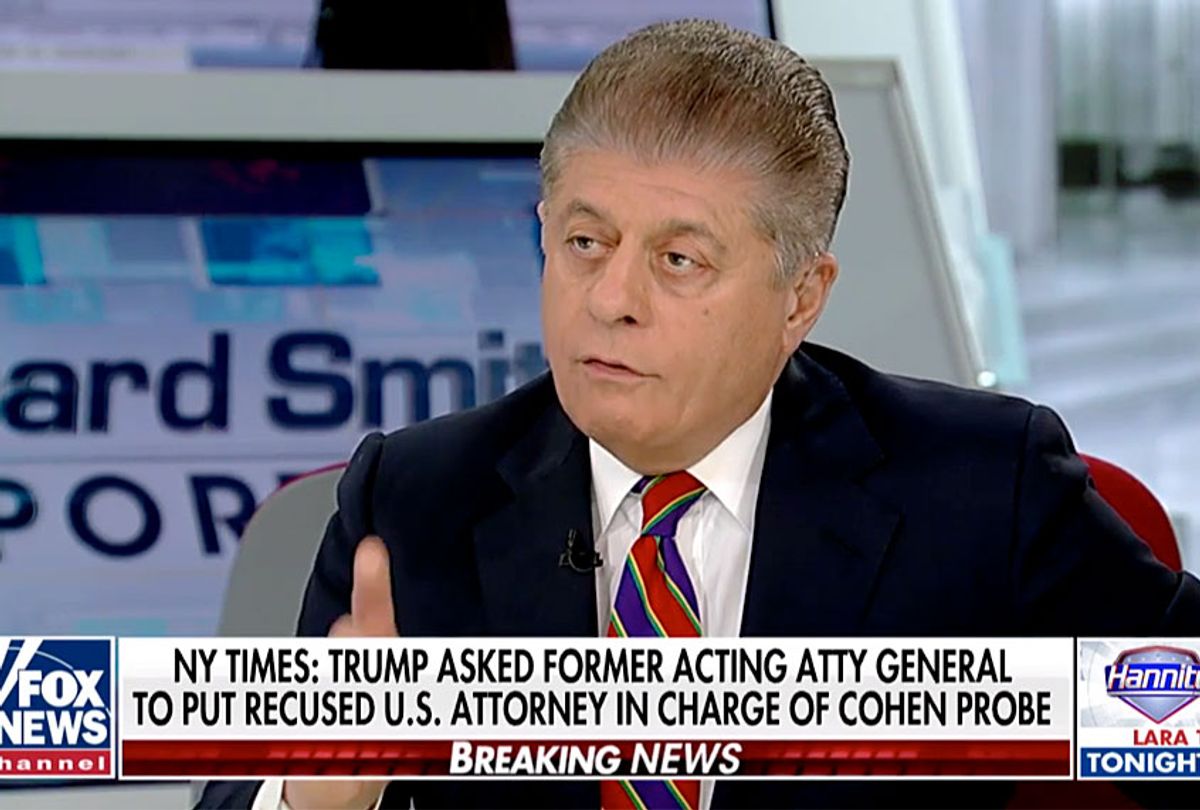 Judge Andrew Napolitano, a close friend of President Donald Trump and frequent contributor to Fox News, told anchor Shepard Smith on Tuesday that the president may face legal trouble if an explosive report about him in The New York Times is true.

Napolitano was responding to the following paragraph from the Times' story.

As federal prosecutors in Manhattan gathered evidence late last year about President Trump’s role in silencing women with hush payments during the 2016 campaign, Mr. Trump called Matthew G. Whitaker, his newly installed attorney general, with a question. He asked whether Geoffrey S. Berman, the United States attorney for the Southern District of New York and a Trump ally, could be put in charge of the widening investigation, according to several American officials with direct knowledge of the call.

If the story is true, Napolitano told Smith that it would demonstrate "corrupt intent" on the part of the president. He added, "That is an effort to use the levers of power of the government for a corrupt purpose to deflect an investigation into himself or his allies."

Napolitano also argued that Whitaker himself could be in trouble because he testified to Congress that Trump had never pressured him to squash any of the various investigations into him.

"There’s two potential crimes here for Matt Whitaker. One is actual perjury, lying to the Congress. The other is misleading. Remember, you can be truthful but still misleading," Napolitano told Smith.

Napolitano had previously criticized Whitaker because he felt that Trump's appointment of the acting attorney general was unconstitutional.

"In my view, that any judicial mind examining the circumstances of Mr. Whitaker’s appointment would find that it is not lawful because it does not comply with the specific statute, which requires that whoever runs the DOJ — I’m not talking about any other department, but the DOJ — must have been nominated by the President, confirmed by the Senate at the time they are elevated," Napolitano told Salon last year. "The reason for that is because of the extraordinary authority vested in whoever runs the DOJ. You might say, 'Well, the Secretary of Defense has extraordinary authority, he kills people.' Yes, he does, but he can’t fire a shot without the President’s permission. The Attorney General does not need the President’s permission to commence a criminal investigation, to direct the FBI, or to shut down a criminal investigation. For that reason, Congress required the Senate confirmation because Congress wants to know the legal thinking of the human being who’s going to run the DOJ. It’s too much power, Congress wrote — not I — to put in the hands of an untested, unexamined person, which is what Mr. Whitaker is. By untested and unexamined, I mean untested and unexamined by the rigors of the Senate confirmation process."