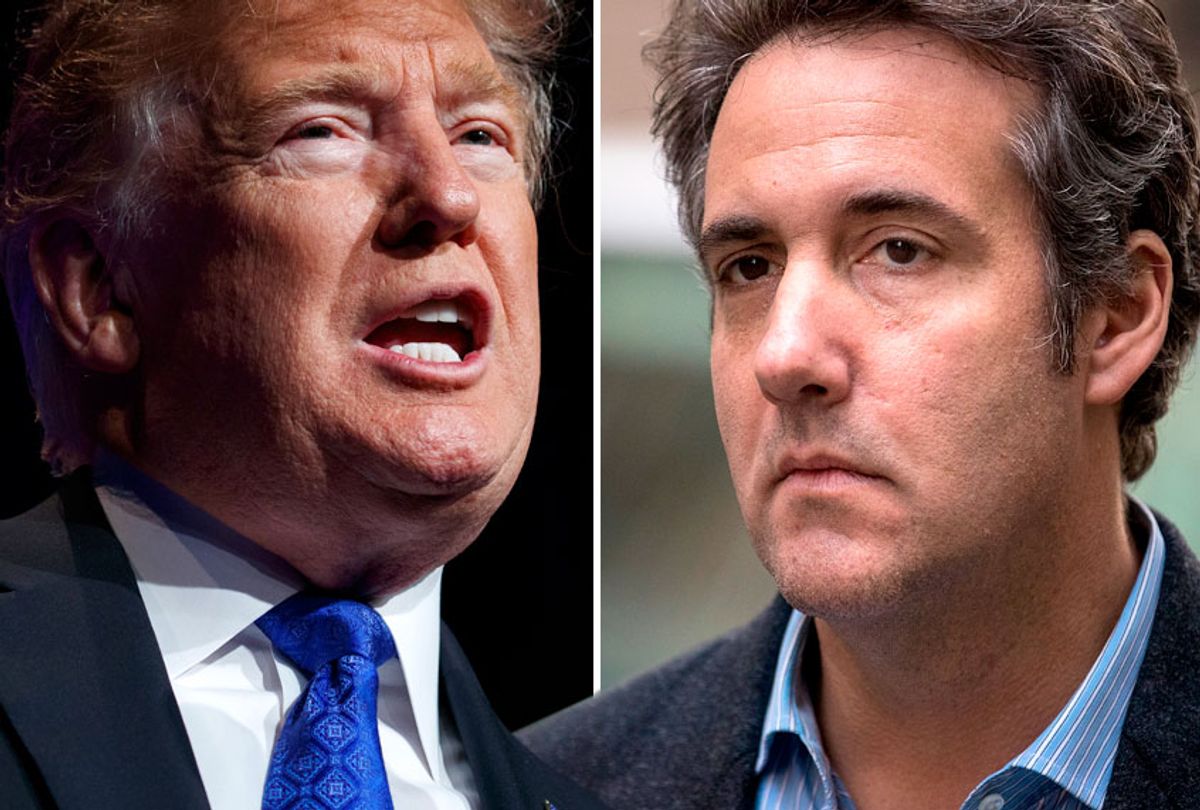 Michael Cohen’s testimony before the House Oversight Committee yesterday on Capitol Hill will likely be the most-watched broadcast of the week, if not the year. By the time this is published, the overnight ratings won’t yet be in, and a great deal of analysis, legal wrangling and time will flow by before we can decide what impact the hearings will have on Donald Trump’s presidency  — or for that matter, our democracy.

Yet unlike most TV, there's no consensus on the genre of The Michael Cohen Show. Scripted drama? Unscripted competition reality? Sporting match? News? No.  Or yes. Who the hell knows. A better question may be this: What, exactly, did watching Cohen's Capitol Hill hearing do to warn the average viewer about how the norms of our democracy are being eroded?

Those watching Cohen’s opening statement were provided with plenty to digest, actually, starting with a quote tailored for cable news chyrons. Opening with a statement of contrition for what he described as his “part in concealing Mr. Trump’s illicit acts rather than listening to my own conscience,” Cohen then emphatically bleated: “I am ashamed because I know what Mr. Trump is. He is a racist. He is a conman. He is a cheat.”

And this rode across every major network’s lower third.

From its opening moments, The Cohen Show was wall-to-wall, with ABC, NBC and CBS airing it alongside CNN, Fox and MSNBC.

Before this, however, millions of Americans had the opportunity to view the questioning by members of House in its raw fullness.

The main broadcasters did not bleep out Cohen’s repetition of Donald Trump’s remark about "sh**hole countries," for example, which is less notable for network news’ willingness to flout FCC rules on profanity than the fact that censoring profanity these days is probably pointless. Everybody knows what was said and that a sitting president said it.

From the standpoint of governance, the outstanding query is whether anything that was said will have an impact after all the toxic dust clears. In the moment, however, Cohen’s testimony was treated by the members of the Oversight Committee, mainly on the Republican side, as yet another installment of a drama in which everyone is angling for better billing.

Sophia McClennen’s Wednesday article warned that, as the 2020 election approaches, the public’s low regard for the media’s trustworthiness all but ensures that vast swaths of the electorate will be woefully misinformed about issues vital to our democracy. But the Cohen hearing shows that the fault for this does not solely lie with a media that has increasingly catered to the audience’s partisanship.

This time, it was the government officials who view themselves as rising TV actors, willing to do anything to expanding their co-starring roles in a presidency driven by ratings. Wednesday's performance by Republican ranking member Jim Jordan (R.-Ohio) is an extreme example of the Hawthorne effect, with the subjects altering their behavior in response to being observed.

Aware that millions upon millions were viewing the hearing, Jordan and fellow GOP committee members responded with extreme head shaking and finger-wagging. Plentiful were the declarations that the Democratic majority was wasting the people's time by airing this "spectacle" in which, among other things, Trump's former lawyer presented documentation to back up allegations that Trump directed hush-money payments to cover up his extramarital affairs while holding in office.

The Cohen hearing, meanwhile, is not a joke or a sideshow, even though Jordan and his fellow GOP team members worked it as such. It was highly successful counter-programming magnetic enough to earn blustery disapproval from Sen. Lindsey Graham (R.-S.C.), who told reporters, according to CBS news, that when he spoke with Trump Tuesday night about North Korea, the main concern seemed to be over the congressional hearing’s scene-stealing potential.

“... He mentioned, I think, he was upset he was going to have dueling shows here,” Graham said. “It did bother him that there's going to be a split screen between Michael Cohen and him meeting with Kim Jong Un.”

Neither of those choices constitutes uplifting television.

But Graham’s plain characterization of these proceedings as a show is an interesting indicator. Capturing the lens is more important to some members of Congress than doing their job to get to the bottom of whether and how the man holding the highest office of the land broke the law to win power.

This shallow spectacle of outrage led by Jordan obfuscated the purpose of the hearing to the point that it was easy to get caught up in the Ohio congressman’s fervor.

Other GOP members of the committee followed suit, grandstanding with speeches calling attention to Cohen’s status as a convicted liar and hammering on his intent to parlay his time spent with Trump into book and movie deals.

Situated in the audience behind Arizona representative Paul Gosar (R) was a sign displaying a photo of Cohen placed atop a background of red flames, with the words “LIAR, LIAR, PANTS ON FIRE!” screaming at Cohen and the observers present for the proceedings. This had no other purpose but to troll Cohen and — it goes without saying — own the libs.

Who says Alexandria Ocasio-Cortez is the only member of the committee skilled in working social media?

Coincidentally, Rep. Ocasio-Cortez (D.-NY) is one of the few Democrats to effectively resist the TV-pandering bait set by Jordan and others, presenting a reasonable line of follow-up questions to lay the groundwork, before the eyes of the public, to seek additional financial documentation from the Trump Organization and subpoena other officials who could corroborate some of Cohen’s more damning allegations.

Her fellow freshman congresswoman Katie Hill (D.-Calif.) also maintained an all-business approach during her time to place cross-hairs on Cohen’s allegations that Trump has orchestrated hush payments to women he had affairs with, including Stormy Daniels. These were illuminating moments during a long binge marked by frequent instances of committee Chairman Elijah Cummings (D.-Md) banging his gavel in order to keep outraged Republican committee members’ melodramatics in check.

But, as a number of news channel contributors pointed out — including Preet Bharara, the former United States Attorney for the Southern District of New York — there was little-to-no drilling down by the GOP on the inconsistencies in Cohen’s statements that day. Nor, for that matter, were there many substantive, expository examinations of potential acts of criminality.

Jordan showed himself to be a cautious student of the Brett Kavanaugh proceedings, mimicking the feigned red-faced outrage of his Senate brethren on that committee.

Cohen, meanwhile, did not accept these theatrics in silence. “I did the same thing that you’re doing now for 10 years. I protected Mr. Trump for 10 years,” he said to Gosar one point. And at another, when Jordan took his dramatics a bridge too far: “Shame on you, Mr. Jordan.”

Cohen is no innocent here, not by a stretch and regardless of how many Democratic committee members wanly attempted to paint his agreement to testify as a "redemption story." Yeah, not so much. Our collective memory may be brief as a sneeze these days, but as a reminder: the newly contrite sad-sack that sat before this congressional committee on Wednesday was not so long ago a loyal and aggressive henchman professing the kind of loyalty usually reserved for Mafia underlings.

Occasionally, it must be said, the hearing yielded moments any writer would have killed to script. When a GOP member repeated Cohen’s “racist, con man, cheat” quote back to him and asked what he would call himself, Cohen calmly replied, “A fool.”

To his colleague’s credit, Fox's Chris Wallace predicted where the chips would fall early in the day. Viewers who like Trump would be horrified by the hearing. For viewers who "don’t like Donald Trump, this is basically catnip,” he said.

Right around episode 15 or 16 of a 22-episode television season — or maybe eight or nine for series with a 13-episode arc — is when a show’s writers typically toss in some kind of game-changing development.

Said wrench in the works may take a variety of forms. Maybe it’s a new villain. Maybe it's information about the main antagonists that grants the protagonists hope, real or false, or sends them spiraling into despair. Perhaps natural disaster strikes, be it ecological, medical or social.

Whatever it is, this shift or reversal drives the season from that point on. Occasionally the ramifications of it extend into the next season. In many cases it is designed to spur interest in another season if said series has not yet received an order for such. Or sometimes it’s a last-ditch gambit to save a series, culminating as a cliffhanger.

In this piece of history written as daytime drama, we won’t know whether this episode is that game-changer or if it’s the precursor for the much bigger drop in the form of special counsel Robert Mueller’s report. But it does prove that too many of us are far too caught up distractions in making light of what we're seeing, to comprehend the weight of the allegations of crime and wrongdoing happening right in front of our faces.

We have lawmakers angling for their close-up when they should be keeping an eye on the health of our democracy. What that produced on Wednesday was a show that was half substance and half distraction, and entirely alarming, showing irresponsible politicians are more keen to create good television than enact responsible governance. We should be asking ourselves whether our democracy can endure many more seasons of this.