Also on this week's must-see list: "Superstore," and the returns of "Arrested Development" and "Catastrophe" 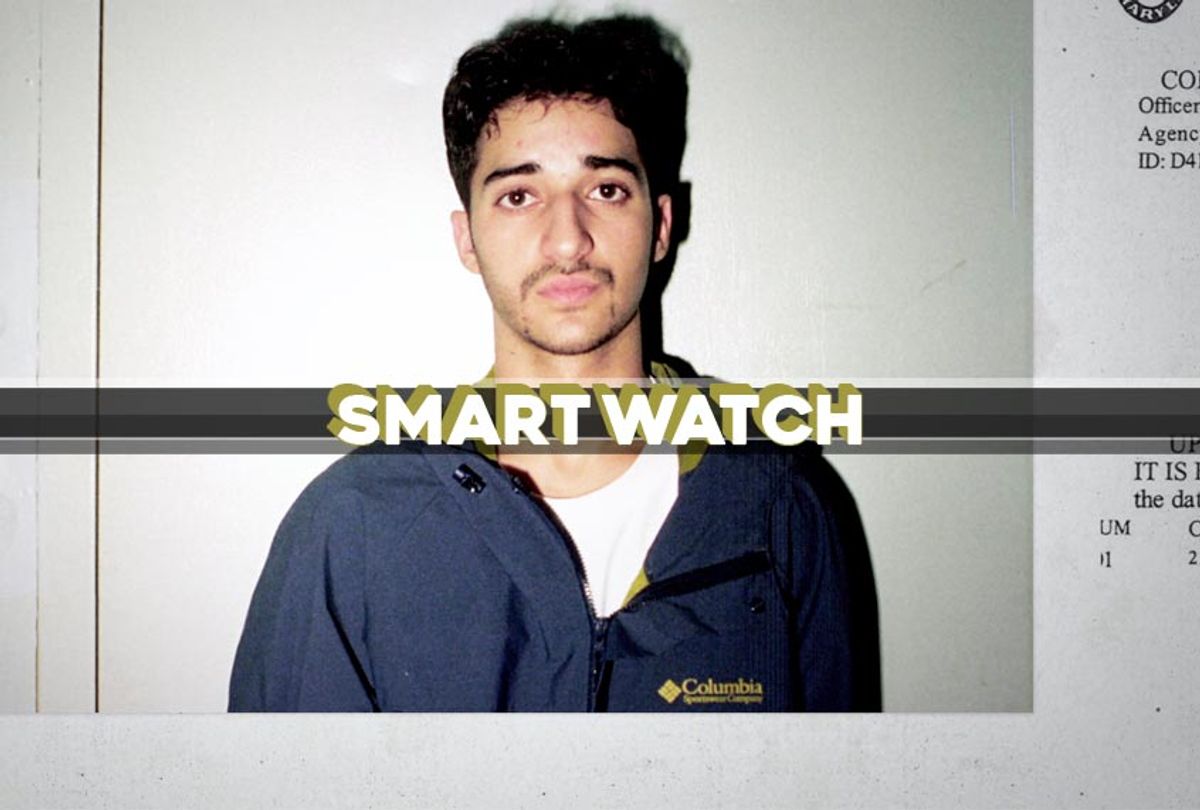 “The Case Against Adnan Syed," premiering Sunday at 9 p.m., HBO

About a year after the “Serial” podcast became a phenomenon and made Adnan Syed a cause célèbre, HBO seized the true crime audience’s attention with “The Jinx: The Life and Deaths of Robert Durst,” whose title subject had not sat down for an interview with a journalist before granting 20 hours of his time to Andrew Jarecki.

Durst, a real estate heir, has been accused of three murders over the course of his life but managed to slide out of two investigations and won acquittal on the third due to lack of evidence.

Based in part on the revelations contained within the series, the FBI arrested Durst in March 2015 the day prior to the series finale — which contains a shocking scene where Durst excuses himself to go to the bathroom and, unaware that his microphone was still on, mutters to himself, "What the hell did I do? Killed them all, of course." His murder trial is set to commence in September of this year.

This is worth citing as a reminder that when it comes to exploring true crime cases in progress, HBO has been down this road before. On the Friday before Amy Berg’s four-part documentary on Syed’s case is set to hit HBO, the news broke that Maryland’s Court of Appeals has determined that he is not deserving of a new trial, reversing the opinion of a lower appellate court and reinstating the conviction a Baltimore judge vacated in 2016.

This doesn’t mark the end of the road for Syed but, rather, it's another obstacle to overcome in the quest to get another day in court. It may very well be that this four-part docuseries could refresh the public’s memory in the way that season 1 of “Serial” highlighted holes and inconsistencies in the prosecution’s case.

It must be said that “The Case Against Adnan Syed” doesn’t aspire to be a visual remake of the podcast, although it does retrace many of the steps, at times more methodically than some viewers may prefer. But in addition to presenting updated information, the main service it provides to the podcast’s voracious consumers is to place Hae Min Lee in the spotlight as opposed to prioritizing Syed’s perspective, in the way that the podcast did.

Berg enlivens Lee’s story by reading from her diary and recreating significant moments in her friendship and eventual romantic relationship with Syed with animation that is heartbreakingly simple.

Berg is careful, at the same time, to ensure that Syed’s family and that of his friend and champion Rabia Chaudry (who first brought his case to “Serial” producer and host Sarah Koenig) retain a significant presence. It’s just that their voices aren’t the primary drivers, especially in the first episode where we meet Lee, at last.  And this is a crucial element in comprehending the extent of the tragedy in this case.

For the nearly 20 years that he’s been in prison Syed has consistently maintained his innocence, as have allies like Chaudry and Asia McClain, the woman who offered an alibi but was never called to testify.

But through Berg’s painstaking re-creations and perspectives offered by Lee’s friends such as Debbie Warren and Aisha Pittman, we get a sense of what this community has lost: a young woman who was academically accomplished, well-liked and driven to succeed, and who was also a teenage girl given over romantic fantasy and who was not immune to frustration at the boundaries placed on her by family and culture.

“My prayers are always not just that Adnan’s exonerated, but that God brings the truth to light,” Chaudry offers in a premiere. “Because that is justice for Hae.”

We’ll see if Berg’s series impacts the next chapter of this case.

Shifting gears here, this week brings the return of three comedies with devoted fanbases. But within that trio, this is a network series at which the average premium TV fan still turns up his nose for reasons having nothing to do with quality. Rather, the issues the uninitiated have with “Superstore” revolve around the fact that it is too obviously a Made-For-Network TV comedy.

If only they’d watch, they’d understand that’s part of the joke.

As the fourth season of “Superstore” continues, the writing that drives the drudgery at Cloud 9, the big box Walmart stand-in where the series is set, has only sharpened. Mundane tasks the stories vest-wearing worker drones undertake only augment the faraway corporate view that these human beings are cogs in a machine who can be kept in line with pointless tasks like Fitbit challenges — except, of course, their wearable monitors aren’t name-brand but generic knock-offs.

Even the ambitious colleagues among them are occasionally reminded of how Sisyphean their efforts are. In an upcoming episode America Ferrera’s Amy confronts the realities of being a woman angling to climb into the male dominated managerial arena, only to find herself in a situation forcing her to test her loyalties to other women.

One might notice that, or simply laugh at the punchlines series creator Justin Spitzer and his writers spin out of the situation at hand. And in this way, “Superstore” presents political and social issues to the audience with humanity, yet stealthily.

Throughout the series the men and women of Cloud 9, led by Amy and her intellectual boyfriend Jonah (Ben Feldman), confront the casual inhumanity of corporations with warm-blooded humor and optimism, but just as often make a mess of things. This season’s focus turns to Mateo (Nico Santos), who recently revealed his undocumented immigrant status and is contending with the roadblocks purposely erected to make it difficult for people in his situation to gain asylum.

As it depict the many harsh realities the working class faces, and the many cultures that comprise the working class, “Superstore” conveys the broader idea of America as a big bright box for us to navigate and improve together, if only to keep the doors open and the lights on.

It’s not a crime to be a throwback if a series used to be known as an innovator, I suppose. It is thusly that I make you aware of “Arrested Development” returning for the second half of season 5, the first half of which debuted on Netflix a year ago to the thrill and delight of a lot fewer fans than creator Mitch Hurwitz may have hoped.

Netflix, for its part, was aiming to qualify for Emmy contention for two years running, but at this point the market is flooded with better comedies; one example is listed in the space above this one.

This is not to say that “Arrested Development” isn’t worth a binge, but rather that you know precisely what sort of shenanigans and snort-inducing wordplay you’re going to be subjected to. It’s there for you, albeit with considerably less of the zing and gusto that was the series’ lifeblood back in the days when it was on Fox . . . and nobody watched it.

Completists must have an ending, and these new episodes tie off a number of dangling plot threads while reminding us that Jessica Walter is still the best thing going on this series. Fortunately, we can enjoy her any time, in animated form, playing essentially the same character on “Archer.” At least on that show we don’t have to ignore that Jeffrey Tambor is still around, even after the business that got him booted from “Transparent” and the news that he verbally harassed Walter on this set.

As for the rest, Jason Bateman, Michael Cera, David Cross, Tony Hale and Alia Shawkat still have wonderful chemistry, and guests like Maria Bamford and Kyle Mooney are always a hoot.  Won’t it be nice to see each of them in the other projects we’ve been watching instead? Sure.

On the other end of the scale is Rob Delaney’s and Sharon Horgan’s fabulously dysfunctional TV marriage, our view into which ends with the six bittersweet episodes coming out Friday.

“Catastrophe” is one of the few shows that excavates the dirty business of marital partnership, parenting and romance without overly sweetening what a challenge it can be to commit to a person. The series establishes precisely that aim out of the gate, opening with a meet-not-so-cute between Rob and Sharon in a bar, which cuts to torrid, no-string-attached sex, which in turn evolves into a short-term fling.

Then Sharon gets pregnant. Then, to the surprise of both, they get married. And get knocked up again. And Rob’s alcoholism ramps up. And Sharon has second thoughts about the whole arrangement. In the season 3 finale, Rob gets in a car accident and confesses to Sharon he won’t pass a sobriety test.

In spite of how all this sounds, and the title, “Catastrophe” is never dour or dull. Even its darkest moments expose a silver lining of laughter preventing the mood from sinking like a stone. To honor that, it’s not a spoiler to say the show ends quite appropriately, as it begins: with dangerous, devil-may-care action that may or may not result in a disaster better known as love.