Is there room for a Republican to mount a challenge for the party's presidential nomination against Donald Trump? 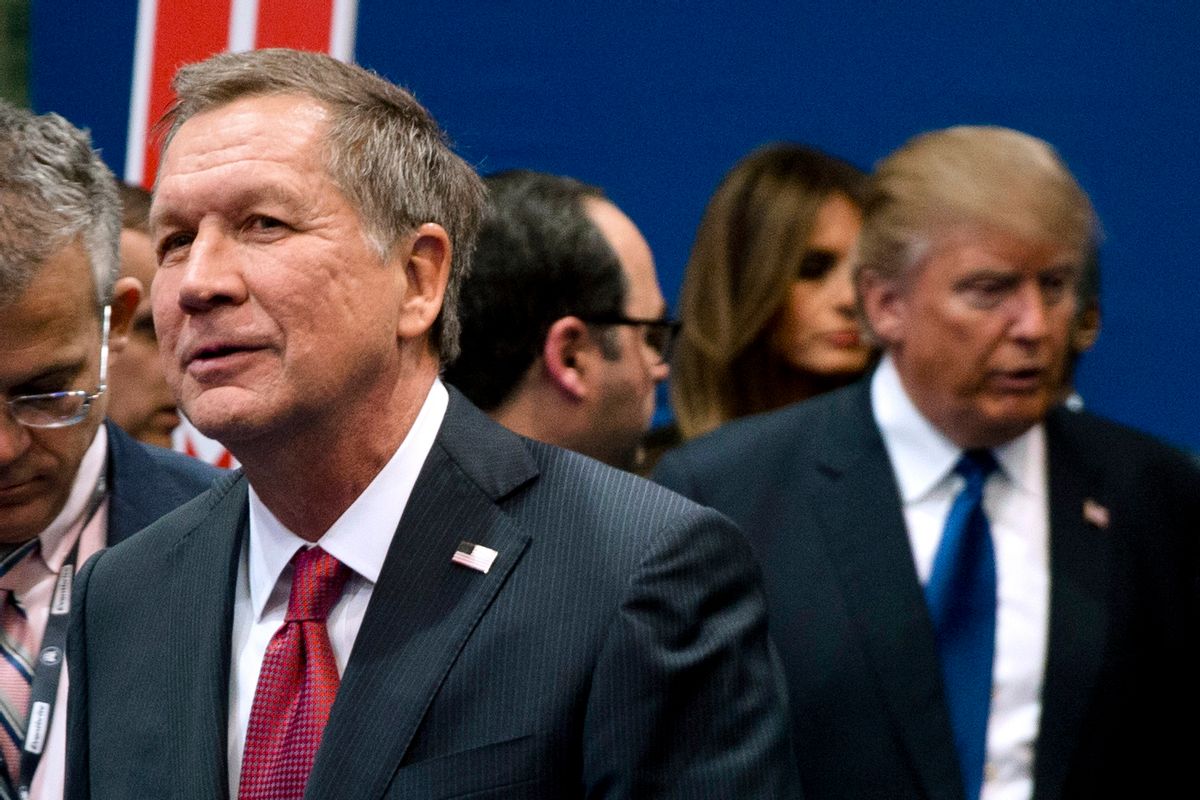 FILE - In this Feb. 6, 2016, file photo, Ohio Gov. John Kasich, left, and Donald Trump, right, speak to reporters after a Republican presidential primary debate hosted by ABC News at Saint Anselm College in Manchester, N.H. While Trump is bypassing the NAACP national convention taking place in Cincinnati from Saturday to Wednesday, July 16 to 20, a Kasich spokeswoman confirmed Friday, July 15, 2016, that the governor will speak to the NAACP on Sunday, July 17 a day before Hillary Clinton's speech to the NAACP and the start of the Republican National Convention in Cleveland. (AP Photo/Matt Rourke, File) (AP)
--

Iowa Republicans plan to host their quadrennial presidential caucus in 2020, despite President Donald Trump's status as the party's incumbent nominee, and now a new poll from the Hawkeye state reveals ample room for a Republican candidate to mount a serious primary challenge.

Of potential challengers, Gov. John Kasich, who unsuccessfully ran against Trump in the 2016 cycle, polls most favorably. Twenty-seven percent of respondents view the former Ohio governor favorably, while a near-equal amount – 28 percent – view him unfavorably. The remainder 45 percent of respondents are not sure about Kasich's potential candidacy.

During an appearance on ABC's "This Week" in November, the GOP lawmaker claimed he had been weighing a third presidential bid "virtually every day" with friends and family.  "Look, we need different leadership. There isn't any question about it," Kasich told George Stephanopoulos at the time. "I'm not only just worried about the tone, and the name calling, and the division in our country and the partisanship – but I also worry about the policy."

Kasich has been spreading his message as a paid contributor on CNN, a hiring decision which has come under fire by media ethics watchdogs for seemingly being compensated to test his potential 2020 message. "Media critics knocked CNN for signing Kasich knowing he may still run for president, saying the network is effectively giving him a paid platform to build momentum for a future campaign," media reporter Maxwell Tani wrote in the DailyBeast in February.

Marlyand Gov. Larry Hogan, a Republican who did not support Trump in 2016, has also publicly flirted with a potential primary candidacy to Trump.  "I would say I'm being approached from a lot of different people," he told CBS News correspondent Ed O'Keefe last month. "And I guess the best way to put it is I haven't thrown them out of my office."

However, the results of the Iowa poll show that Hogan trails Kasich by a mile when it comes to name recognition. Of registered Republican voters, 84 percent of Iowans are not sure how they feel about Hogan. Former Governor of Massachusetts Bill Weld, who served as Libertarian candidate Gary Johnson's running mate during the 2016 election, meanwhile has already announced a presidential exploratory committee. However, 81 percent of respondents are also not sure about his possible candidacy.

“I hope to see the Republican Party assume once again the mantle of being the party of Lincoln,” Weld said at an event in New Hampshire, according to the New York Times. “I encourage those of you who are watching the current administration nervously but saying nothing to stand up and speak out when lines are crossed in dangerous ways. We cannot sit passively as our precious democracy slips into darkness.”

The Iowa poll of 400 registered Republicans was sponsored by CNN, the Des Moines Register and Mediacom. It has an error of plus or minus 4.9 percentage points.

Salon's Shira Tarlo and Justin Wu contributed to this report.