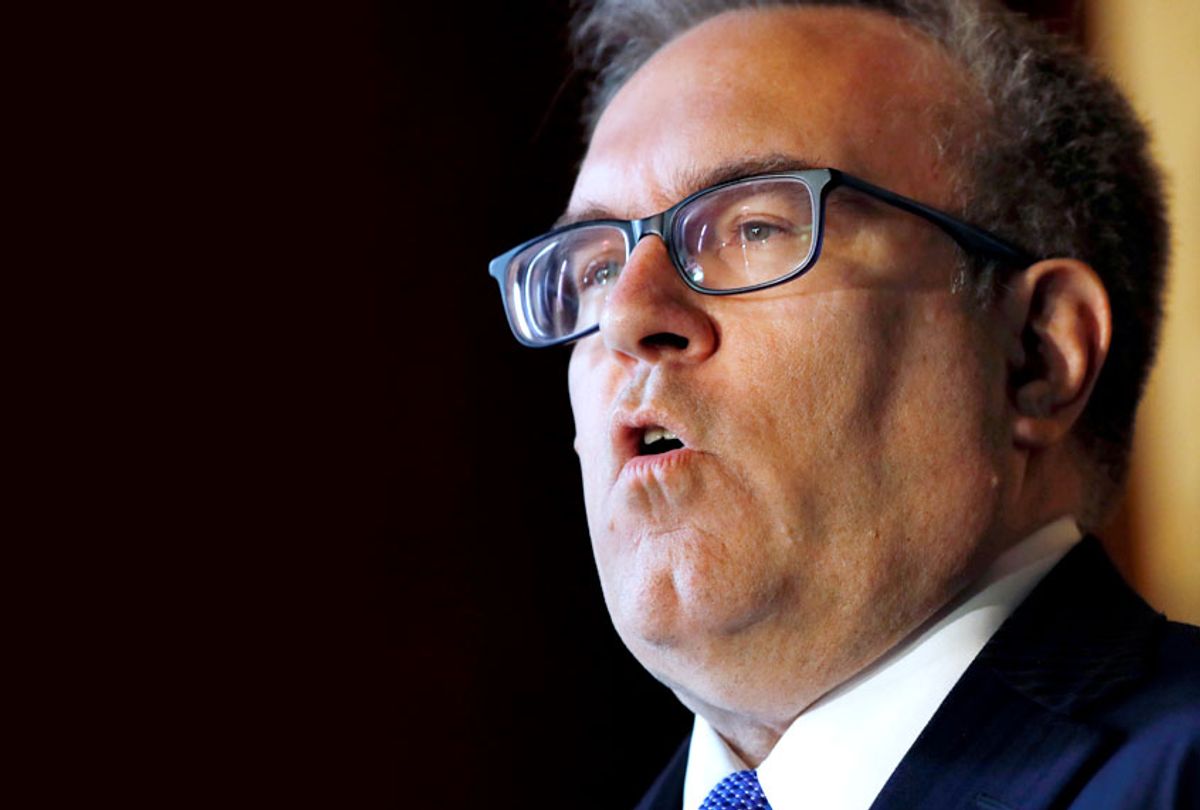 "We have 1,000 children die everyday worldwide because they don't have safe drinking water. That's a crisis that I think we can solve. We know what goes into solving a crisis like that. It takes resources, it takes infrastructure and and the United States is working on that. But I really would like to see maybe the United Nations, the World Bank focus more on those problems today to try to save those children. Those thousand children each day, they have names, we know who they are," Wheeler told Garrett.

Although Wheeler acknowledged to Garrett that the emissions of fossil fuels and other man-made variables "certainly contributes" to climate change, and promised that President Donald Trump would reveal two major regulations later this year in order to curb CO2 emissions, he emphasized that he considered providing clean water to be a higher priority.

"Most of the threats from climate change are 50 to 75 years out," Wheeler argued, adding that people are currently dying from drinking dirty water.

America, Wheeler insisted, is "doing much better than most westernized countries on reducing their CO2 emissions, but what we need to do is make sure that the whole world is focused on the people who are dying today, the thousand children that die everyday from lack of drinking water. That is something where we have the technology, we know what it will take to save those children. And internationally, we need to step up and do something there."

In his first TV interview since being confirmed, @EPA administrator @EPAAWheeler says unsafe water is a bigger environmental crisis than climate change.

Wheeler then addressed the Flint water crisis, which began in 2014 when the water for the Michigan city of Flint was changed from Lake Huron and the Detroit River to Flint River, thereby exposing the city to elevated lead levels due to inadequate water treatment.

"First of all, I want to make sure the American public understands 92 percent of the water everyday meets all the EPA requirements for safe drinking water," Wheeler told Garrett.

He added, "We have the safest drinking water in the world. We are working to update a number of regulations, one of which is our lead and copper rule, which takes a look at the pipes. The lead pipes that we have around the country. As part of that, we're looking at what we can do to require regular testing for schools and daycares, so that would be part of that regulation when it comes out later this year."

As for the water in Flint, Wheeler told Garrett that "part of the problem with Flint was there was a breakdown in once they got the data, once the city of Flint, the state of Michigan, the Obama EPA – they sat on it. We're not doing that. As soon as we get information that there's a problem, we're stepping in, we're helping the local community get that water system cleaned up."

Although Wheeler is correct about the problem with contaminated water in both the United States and the rest of the world, his downplaying of the threat posed by man-made climate change is inconsistent with the scientific consensus.

"There will be and already is major consequences and they grow over time. It does not look good," Kevin Trenberth, a Distinguished Senior Scientist in the Climate Analysis Section at the National Center for Atmospheric Research at the University Corporation for Atmospheric Research, told Salon in August. "The effects are always local but there are more and more of them and the consequences are major. These includes floods and drought, heat waves and wild fires."

Michael Mann, he Distinguished Professor of Atmosphere Science at Penn State,  explained in October what the world would have to look forward to if global warming goes unchecked.

"The summer and fall of 2018 provides a glimpse of what will be in store," Mann told Salon. "We will need to adapt to a world where damaging extreme weather events are far more common. If we don’t act, these events will become both more extreme and more common."

He added, "A large part of the planet will become unlivable (either too hot or too dry). And more and more of the available land surface will be used for agriculture and farming to feed a growing global population. That means more concentrated human settlement—and probably a lot more conflict."