Nora McInerny rejects the cult of positivity that demands we get over grief: "Bitch, how?"

Salon talks to a leading voice on widowhood about remarriage, uncertainty and why there are "No Happy Endings" 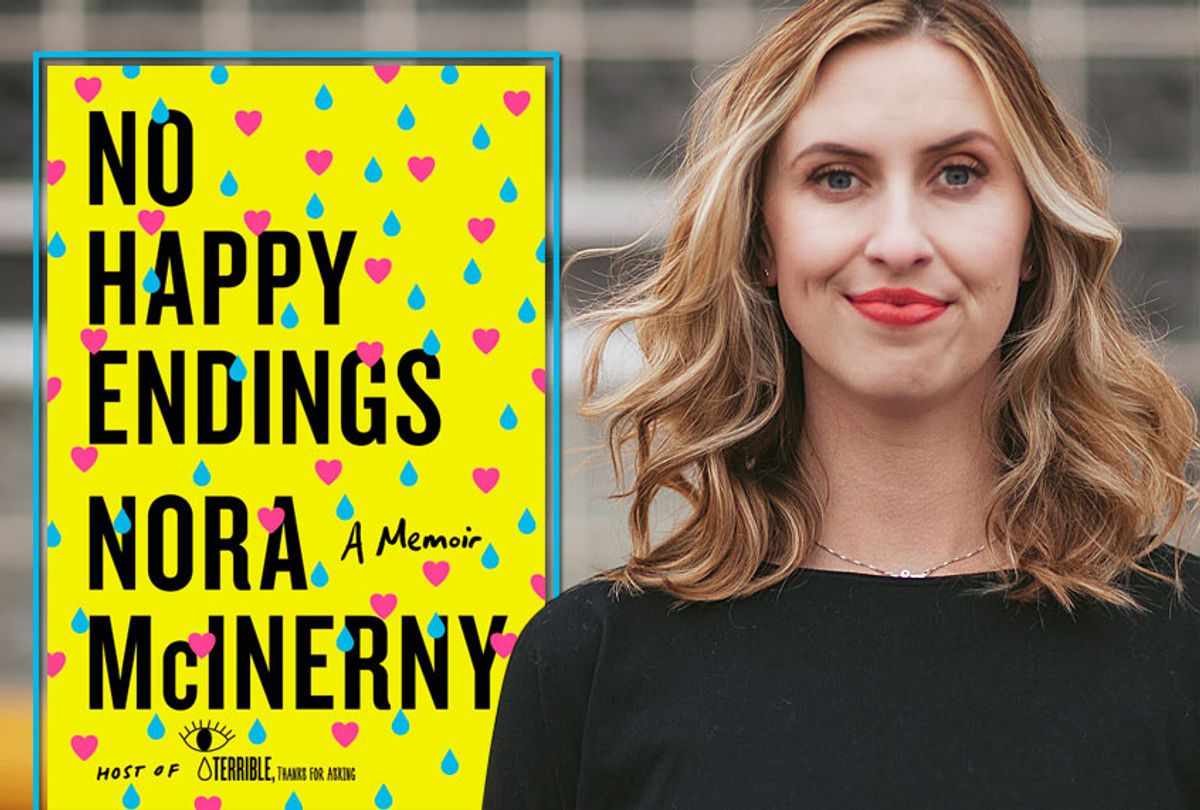 Nearly five years ago, Nora McInerney lost her father, miscarried her second child and watched her husband die of cancer, all in the span of a few weeks. In the aftermath, thanks to a viral obituary and an appropriately named podcast called "Terrible, Thanks for Asking," McInerney found herself becoming a leading authority in the world of widowhood and general crap-hitting-the-fan. Today, though, she is a successful author and entrepreneur, happily remarried and living with two stepchildren, her son from her first marriage and a growing toddler. Naturally, the title of her new book is "No Happy Endings: A Memoir."

McInerney knows that life, especially life after an emotional tsunami, does not wrap itself up in a fairy tale bow. And that's what she wants to talk about. As someone who knows a few things about life's little sucker punches, I'm a longtime fan of McInerney's style. On her podcast and in conversation, she is as enthusiastic and ebullient as she is unflinching and grounded. It's refreshing, because life is never binary. And we need permission to be joyful and excited and energetic even when we're simultaneously sad and grieving and miserable.

I spoke to McInerney recently via phone about love, loss and life-affirming fights over emptying the dishwasher.

People must constantly be coming up to you to share their own griefs and pains. How are you managing that, Nora?

Honestly, I'm not. I'm a un-licensed therapist is what I am, so I don't have any of those coping mechanisms that they learn by going through school and the licensure. The job that chose me or career path that illuminated before me when Aaron died and I blew up the rest of my life, does mean that I spend a lot of time in Trauma Town.

We have the phrase "life affirming" in our family that we just apply to everything. "You know what, we're just really tired tonight. Let's order some life affirming pizza." We just want to be living in this moment and enjoying whatever is around us. And that's it. It's a life affirming thing to remember that you are awake in the world.

You are in a totally different place than when your first book came out. I spoke to you two years ago and now you're married and occupying a very different space. You call it sad and lucky. You can be sad and lucky and one does not diminish the other. I was thinking of Sad Nora and the Secret Baby and thinking about Patton Oswalt and all the crap that he got when he had the audacity to fall in love and get married after his wife died.

But also people would not have been happy had he just turned his life into a mausoleum for his dead wife. People would have been like, "Dude, get over it. It's been X amount of time."

The fact is it's neither. You do not get over something. You do not move on from this. You move forward with this as just a part of who you are in your DNA. There's this relentless culture of positivity that is almost its own form of spirituality now. There are people selling bajillions of books that are basically like, "Just don't be sad and just get over it." And then it's like, "Bitch, how?"

It's completely ignoring the reality of an experience and also the many additional systemic issues or biological issues that make that not feasible for most people.

I try to explain this to our kids too. Now we have this huge range of kids, a 400 percent increase in the amount of children that I had the last time we spoke. I want them to know that the point of life is not to try to avoid as much suffering as possible.

And the moments of absolute bliss, that's the rare stuff.

Hundred percent. People ask me, "What are like some of the things that have been really meaningful to you since you came back from stage four cancer?" And I say, "Yelling at my kids to pick up their socks." That's beautiful to me.

I think all the time how Aaron was dying and he was laying in bed. He was like, "I'm not going to know how 'Game of Thrones' ends." Then he goes, "But I don't think the author will either."

It is the perfect metaphor because you call the book "No Happy Endings." There are no endings, period.

People do see — especially people who are at a different phase in their life — where I am as a destination. This book is a response to all of the people who even read the first book or maybe follow me on Instagram and say to me, "I wish I were doing as well as you are." As well as who is? And compared to what?

You're doing a good job however you do this. There isn't a right way to do this. Also this is not a destination. This is a part of life. This is life doing what it does and who knows what comes next. don't say that in a negative way. I truly enjoy where I am now because I know that what comes next is completely unknowable and could promise us some fresh new hell we haven't experienced before.

For probably a good portion of my life until I met Aaron, I did think that that was all avoidable. I remember breaking up with guys because I would take a look at them and be like, "You have some pretty unhealthy habits." I would basically try to hedge my bets and I married a man who would never smoked a cigarette and never done a drug and died of cancer. You cannot inoculate yourself against the actual hard things in life.

Didn't the Greeks already cover this? There are whole plays about this.

I remember when my kids were like seven and eight and thinking, "The storm is coming. I know the storm is coming." And it does. You can't hide in the shelter forever. You have to figure out then, how am I going to survive the storm? How am I going to help them survive the storm? And sometimes you get through it and sometimes it scars you for life. Then you're different. And wouldn't you want to be different, though?

You have so many beautiful things in your life now because of the worst things that happened to you. I think many of us have that. You talk about that in the book.

I think it makes it even more important for me to acknowledge that yeah, we have really good family and we all suffered before we got here and we are all gonna suffer again.

What we have does not negate what came before. This morning we were driving back from the gym, me and the big kids. I don't even how it came up but I was talking to them about when Aaron got his brain surgery. They were listening and we all were laughing. And that's important. It's important for them to know that the former version of my life is still something that I think about and to talk about. So is the former version of their life.

People had that gross knee-jerk reaction to Patton Oswalt because they think, somewhere in them, "Oh, would this happen if I died? Would my person fall in love with someone else? I would never do that because I love my husband so much that if he died I would never." We view that as a threat. We view more love as a threat to the love that we have and that gives a natural reaction. It's also such a small view of love and of our capacity for Love. I feel like it's really detrimental to kids.

Because kids become grown ups. They become grown ups who will internalize that. And I want them to know, you are going to have a lot of love in your life, a lot of relationships in your life, and none of them can take away from the others. Not when you're dating. Not as your family grows. Not as you go through life. There will be new love. A new love is not a threat to the love that you already have.

It just feels so hard for people to get that. It's like Romeo and Juliet. She says, "The more I give, the more I have." Haven't we learned that? Am I the only one who's ever seen a play?

There is this fear. There is this sense that you parcel out your love. You don't want to move on too fast but you also don't want to stay in your grief too long. As if there's this magical one year number that you're supposed to hit like, "Did I get in enough steps on my grief meter?" As opposed to seeing that you can be in various states simultaneously.

And forever. I have not moved on from Aaron. I don't think that there's been a day that I have not thought of him or said his name. He is a part of our family. One of the best parts of raising children with [my husband] Matthew is that he thinks about Aaron and he'll say things like, "Well, I was thinking about that the things that Aaron would want for [my older son] Ralph and the activities that would be important to have. I found this skateboard camp and it seems like something that Aaron would have signed Ralph up for."

I wouldn't have thought of that even though that's a huge anxiety for me. Am I doing as good of a job as Aaron would have done? I do think that's really important for all the kids to see too. Our baby was born into a two-parent household and this is the only version of a family that he's known. The big kids and Ralph have known another version, they've known something else. But they all love him and they all love each other. We still have days where they are all fighting. Last night there was quite a little dust-up about unloading the dishwasher and fair distribution of labor.

You can go through really serious deep, profound catastrophic stuff and you can also still just Hulk out about little things too. It doesn't minimize those things, by the way. Those things are real. It's not about, "Oh now, I'm never going to care about the small stuff." Because we have to live in the small stuff.

The small stuff is every day.

As you say, it's not about being fine. The goal is not fine. Some days are fine, some days are messy and that's it. There is a population of people who are in that club who can be grieving and happy at the same time, and be very, very alive to their sorrow and sadness and also grateful. If you're in that club, I feel like you can talk about anything. It doesn't matter what your thing is, you're just, "You're my people. I can talk to you."

I really want to raise kids like that and I think we are. Which is pretty cool.