Farewell to "Broad City": Abbi and Ilana are breaking out, not breaking up

As "Broad City" ends it does something most TV shows about female friendship don't: It keeps the love alive 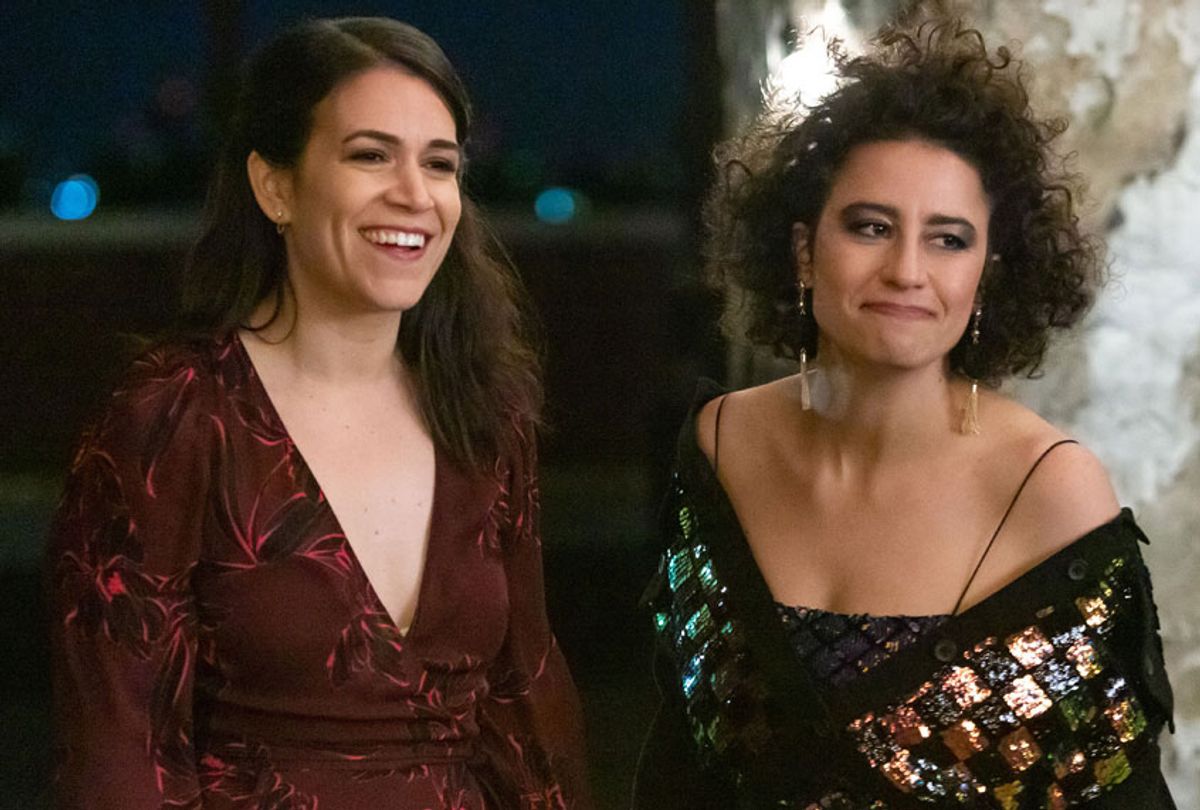 The day my best friend moved away from the city that served as our twenty-something stomping ground is still etched in my mind. Recalling the final moments we were together still aches like a ghost limb more than ten years later: I presumed that I was going to take her to the airport, but she delegated that mission to another friend, which made my already-broken heart sink into an even deeper pit in my stomach.

In hindsight she likely wanted to make saying goodbye easier on both of us, although in the moment that news stung like a betrayal.  I remember dropping her off at her place one last time, hugging her and not looking in the rear view mirror to see whether she was waving goodbye.

With that she was gone. First to Cambridge, Mass., then London, then Qatar, then back to America. I visited a lot of cities and life states in the interim, but I remain rooted in the same place, geographically. Separately we have moved forward, evolved. We have stories to share that the other hasn’t heard or experienced.

What I’ve just described reads like a love affair to some, and that’s precisely what a great friendship is. Every tale about close bonds between women are, in a very real way, romances. Abbi Glazer and Ilana Jacobson, the creators and stars of “Broad City,” get to the core of this in ways other shows have not.

Your better platonic half will keep you company when you’re wandering the streets in the middle of the night, locked out of your apartment with no place to go. She’ll share her psychedelics when she comes by them and stick with you when the comedown gets rough; she’ll also get you into memorable but forgivable trouble.

Together, the series’ heroines Abbi Abrams and Ilana Wexler are a chaotic whirlwind of emotion, mischief and, to cite the title of one of this season’s finer episodes, shenanigans. The pair makes huge mistakes and survives all manner of misadventures arising from the simplest of "oopsies." Even as they dance on the peaks of absurdity there’s something familiar about their mishaps that the average person who knows what it’s like to be nervous about where the rent is coming from can relate to.

When “Broad City” concludes Thursday night, airing its finale at 10 p.m. on Comedy Central, its place in the female friendship wing of television’s Hall of Fame is already secure for the very reason of Ilana and Abbi’s enduring affection for one another. But take a few moments to appreciate what the series’ writers and cast have done differently, and marvelously, with these farewell episodes.

Others have characterized the series as a working-class comedy, which I suppose it is. For much of its run Abbi grits her teeth through hourly jobs that pay peanuts, first at a Bed, Bath & Beyond and then a boutique fitness facility called Soulstice. Ilana is only marginally employed throughout the series, blowing more than solid jobs — including at a fancy restaurant, where RuPaul played her boss — due to her stubborn laziness or theatrical ineptitude. This season they suffered through catering gigs.

But the working-class label is not quite accurate, since Abbi and Ilana have always had an off-ramp whenever they chose to take it.  In this final season they do, each gaining admission to post-graduate programs.

Rather “Broad City” is something more universally relatable: a struggle comedy about the emotional safety net of friendship, and how that support pushes us into unfamiliar territory. Money problems can kill marriages and other romantic partnerships, but there’s nobody finer to be broke with than an equally broke bestie.

In that way, “Broad City” is as much of an adventure series as it is a struggle comedy, with Ilana (and occasionally, Ilana’s mother Bobbi, made legendary by Susie Essman) dragging Abbi into schemes and debacles that often end badly but expand their horizons in fundamentally vital ways.

“Broad City” is unique in the realm of situation comedies in the ways that it breaks with formal and visual norms, often tricking the eye with digitally-rendered gags and inserting imaginative fancy into the dirty reality of its duo’s daily grind. Jacobson and Glazer also exercise their power as producers in extraordinary ways, calling in an enviable array of guest stars — including Hillary Clinton, a monster of a get for a cable sitcom — and refusing to grant airtime to a certain person who represents everything they and their fictional alter-egos stand against.

The penultimate episode, “Along Came Molly,” is a veritable basket of Easter eggs, effectively serving as the show's weird last tribute to the pair. They spend a day clinging to Abbi’s ratty couch, a piece of worn-out furniture whose sentimental value quickly becomes a symbol for the New York chapter of their friendship.

They ride on the back of the garbage truck (which once would have been Abbi’s idea of nirvana)  in order to save it — for Ilana, they tell themselves — and lug the heavy thing through the subway. But at some point in their odyssey, they realize they can’t get the couch back to Ilana’s place without missing the Lil Wayne concert Abbi planned as part of their farewell tour.

Just like in the very first episode, they’re denied entry. And just like in the many episodes that followed, they find themselves tripping balls and twerking in an alley, reveling in the idea that the hype-est event they can possibly attend is the two-person progressive house party that is Abbi and Ilana .

But this time, even with its echoes of previous pratfalls and previous impossible missions patched together in alleyways, is different. It arrives after a flurry of announced departures, each forcing Ilana to crumble and reassemble herself — the most significant, of course, being Abbi breaking the news about moving to Colorado to commit to a career as an artist. That one sends Ilana into a destructive, table-clearing fit that, appropriate to its level of impact, takes place in the midst of the interactive theatrical experience Sleep No More.

So this time, guided by MDMA, Ilana has a revelation appropriate to her ambition to become a  therapist. She concludes that her devotion to Abbi is actually co-dependence. By the end of the evening, the couch is forgotten, but their friendship is still going strong.

The entirety of this fifth and final season has been about closing chapters and saying goodbye to the people, relationships and comfortable habits that keep us in a state of arrested development — but gently, lovingly. That doesn’t often happen on series centered on women who are best friends.

Indeed, most modern series about female friendship inject a dose high drama into their departure, as if to honor some unspoken rule that poignant endings require the addition of bitterness.

Think about it: “Sex and the City” nearly shattered the bridge between Miranda and Carrie prior to the latter’s doomed move to Paris for a lover who would never view her as his equal. In the penultimate episode of what was originally going to be the series finale of “Absolutely Fabulous,” Edina and Patsy part tersely when Patsy decides she’s accepting a job in New York City, leaving Eddy in London.

“Girls” is even more brutal, with Hannah stumbling into Shoshanna’s engagement party and realizing, mere hours after effusing about the permanency of true friendship to young strangers, that she’s the only one of her friends who wasn’t invited. And worse, that her accidental “crashing” is seen as a rude burden to the host.

“Broad City” chooses a different route in part because it has always been a show about two women uplifting one another and never finding a reason to tear each other down. As season 5 progresses, starting with Abbi’s 30th birthday celebration rendered in an Instagram-esque story, the writers gently and meaningfully kiss each member of their circus of supporting constants farewell.

Bevers (John Gemberling), the ever-present boyfriend of the roommate Abbi never sees, seems happy enough to remain rooted where he is. But Arturo Castro’s Jaime, Ilana’s flatmate who unconditionally adores her despite her many ludicrous tendencies, decides to move out and cohabit with his boyfriend (played by Guillermo Diaz), citing his stability as one of the factors leading him to take the leap. Ilana’s casual sex partner-turned-boyfriend Lincoln (Hannibal Buress) realizes he wants things that Ilana doesn’t, like marriage and kids.

Ilana wants above all to stay in the gritty lunacy that is New York, with Abbi.

Nevertheless, true adulthood always lurked on the horizon for Abbi the burgeoning artist and Ilana, the sexually-confident, mostly functional mess. Putting aside childish things to move forward as individuals is an inevitability everyone has to face, even two broke girls who have figured out how to work a place that is committed to pushing out people who just want to hang on.

One of them was always going to have to cut the cord, leaving the other to drive off alone. That’s how the real world works, breaking your heart and filling it up with something else, a determination to maintain and honor the goodness that was in the face of the unknown that’s yet to be.

Comedy Central requested that critics refrain from posting reviews of the finale until it airs. But it’s not out of bounds to call it a fitting end to a series that commemorates an epic friendship and the city that raised it from seed to bloom.

Knowing this makes the end of “Broad City” superior to the typical bittersweet farewell. It’s a send-off, with the assurance that new adventures, mysteries and struggles lie ahead, and that for all the options there are in New York, it simply isn’t big enough to limit the reach and bonds of a loyal friendship.