Barr said spying by law enforcement officials "did occur," but declined to provide any evidence 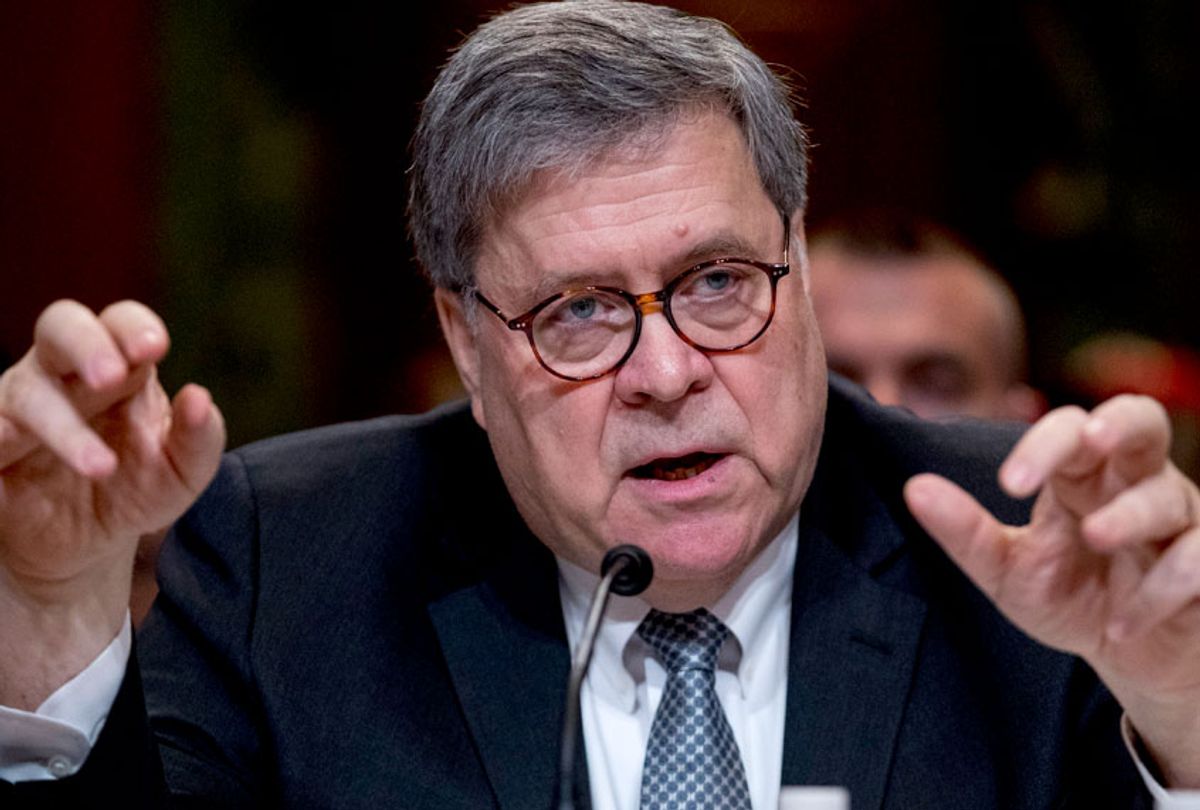 Barr, defending his decision to order a team to investigate the origins of special counsel Robert Mueller's investigation into Russian interference in the 2016 election, told lawmakers on Wednesday, "For the same reason we're worried about foreign influence in elections, we want to make sure that — I think spying on a political campaign is a big deal."

The attorney general's comments came during an appearance before the Senate Appropriations subcommittee for the second of two days of hearings about his department's budget. Barr said he grew up during the Vietnam War when the U.S. spied on anti-war advocates, and there were "rules put in place to ensure there's an adequate basis before law enforcement agencies get involved in political surveillance."

"I'm not suggesting that those rules were violated, but I think it's important to look at that," he said. "I'm not talking about the FBI necessarily, but intelligence agencies more broadly."

When pressed by Sen. Jeanne Shaheen, D-N.H., the top Democrat on the panel, on whether he believes spying occurred, Barr said, "I think spying did occur." He did not elaborate further or detail any wrongdoing by the FBI or Mueller throughout the investigation.

"I have no specific evidence that I would cite right now. I do have questions about it," Barr said, noting that he plans on reviewing "both the genesis and conduct of the intelligence activities directed at the Trump campaign."

He said he is not launching an investigation of the FBI and is not suggesting there is a problem at the agency that is "endemic."

"I think there was probably a failure among a group of leaders there, at the upper echelon," Barr said. "I feel I have an obligation to make sure that government power is not abused."

Sen. Brian Schatz, D-Hawaii, called Barr's "spying" comment "unnecessarily inflammatory," and he offered the attorney general the chance to rephrase his remarks  because, the lawmaker noted, "The word spying could cause everybody in the cable news system to freak out."

At the end of the hearing, Sen. Jerry Moran, R-Kan., the chairman of the panel, asked Barr about the basis for his suspicion that spying occurred but the attorney general declined to answer.

"I believe there is a basis for my concern, but I'm not going to discuss the basis," Barr said.

The Senate hearing comes a day after Barr told a lawmakers at a congressional hearing he was reviewing various counterintelligence decisions made by Justice Department and FBI officials leading up to the launch of Mueller's nearly two-year probe into Russian election interference.

The news of the attorney general's inquiry comes several weeks after Mueller announced the completion of his wide-ranging investigation into the 2016 election. Mueller was appointed as the special counsel to oversee the Russia investigation in May 2017. The decision by Deputy Attorney General Rod Rosenstein to hire Mueller followed Trump's abrupt firing of his FBI director, James Comey, and the subsequent revelation that the president had allegedly asked Comey to drop any investigation into his former national security adviser, Michael Flynn. The news spurred Democrats, and even some Republicans, to call for a special prosecutor to lead the investigation.

The White House and Republicans have long argued that an alleged anti-Trump bias at the DOJ and FBI, as well as the "Steele Dossier," a salacious report compiled by former British spy Christopher Steele that alleges collusion between the president's campaign and Russia, spurred federal investigations into Trump's ties to Russia during the 2016 election. Trump and his allies have falsely claimed that the dossier, which was funded by the Hillary Clinton campaign and the Democratic National Committee to compile research about Trump, including possible connections to Russia, was used by the FBI to improperly obtain a secret search warrant in order to monitor the communications of former Trump campaign aide Carter Page.

Comey rejected that assertion last year when he testified before Congress. He said the investigation into Russian interference was opened after law enforcement officials learned that another Trump campaign adviser, George Papadopoulos, had been told that Russians had "dirt" on Clinton in the form of stolen emails.

Trump on Wednesday appeared to celebrate the news Barr would be probing the origins of the probe.

"What I'm most interested in is getting started, hopefully the attorney general, he mentioned it yesterday, he is doing a great job. Getting started on going back to the origins of exactly where this all started," the president told reporters at the White House. "Because this was an illegal witch hunt, and everybody knew it."