Investigators reportedly asked the pair about their contacts with David Pecker, publisher of American Media Inc. 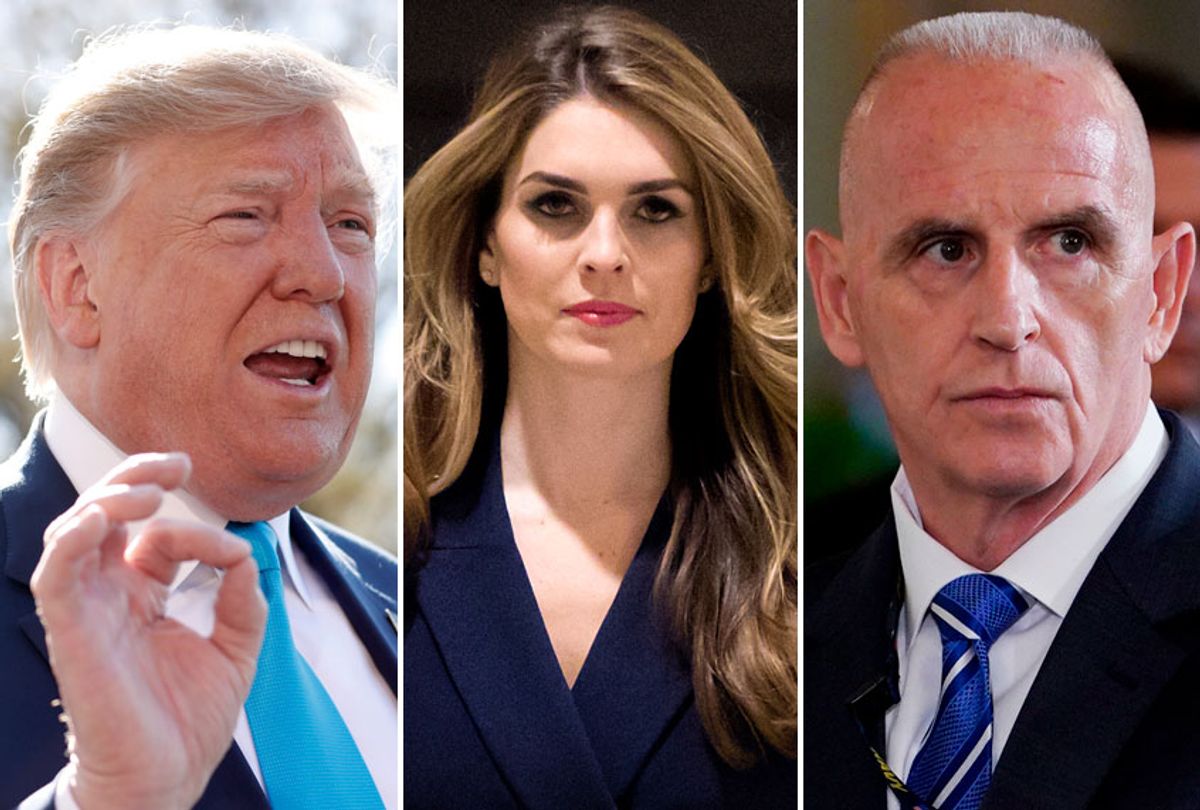 Federal investigators in New York have "gathered more evidence than previously known" from individuals in President Donald Trump's "inner circle" throughout their investigation into payments made to women who alleged extramarital affairs with Trump during the 2016 election, the Wall Street Journal reported Wednesday.

Prosecutors in the office of the United States attorney's office for the Southern District of New York interviewed Hope Hicks, the former White House communications director and a longtime confidant of Trump, last spring, according to the Journal.

Investigators reportedly asked Hicks about her contacts with David Pecker, the chairman and chief executive of the National Enquirer's parent company, American Media Inc., which has admitted it paid $150,000 to former Playboy centerfold Karen McDougal before the 2016 election in order to silence her allegations of an affair with Trump.

The newspaper reported investigators "asked at least one other witness whether Ms. Hicks had coordinated with anyone at American Media" concerning an article published by the Journal on Nov. 4, 2016 revealing AMI had paid McDougal to acquire the rights to her story about Trump before shelving it — a tactic known as "catch and kill." Pecker worked with Michael Cohen, the attorney who spent many years working as Trump's personal "fixer," to arrange the payment.

Investigators reportedly "possess a recorded phone conversation" between Cohen and Keith Davidson, then a lawyer for Stormy Daniels, the adult film actress who has alleged she had an affair with Trump in 2006. Davidson called Cohen after a bank manager asked him about funds wired to his account from Essential Consultants LLC – the shell company Cohen created to facilitate payment – which were then transferred to Daniels. Davidson was worried the transaction was under investigation, according to the Journal.

Investigators also interviewed Keith Schiller, the president's former security chief and former longtime bodyguard, the Journal reported. Authorities reportedly "learned of calls" between Schiller and Pecker and "wanted to know if Mr. Schiller ever handed the phone to Trump." The Journal reported it could not determine what investigators learned from their interview with Schiller.

It is unclear what federal prosecutors might do with the information they have gathered on Trump, the Journal notes. The office of the United States attorney's office for the Southern District of New York "has proceeded in adherence to a Justice Department policy that sitting presidents can’t be indicted. Prosecutors have given no indication they would seek to charge Mr. Trump after he leaves office," the newspaper wrote.

Cohen, meanwhile, was sentenced to three years in prison last December, in part for "brazen violations of election laws," when he arranged hush-money payments on behalf of Trump during the 2016 election. Cohen, who was previously one of the president's most loyal and ardent defenders in business and in politics, pleaded guilty in August to violating campaign finance law as part of a plea agreement with the U.S. attorney's office in the Southern District of New York. He admitted he paid off women "for the principal purpose of influencing the election" for president in 2016, claiming Trump had reimbursed him for the payments. Trump, for his part, has said the payments did not violate campaign finance laws; he has also denied the affairs.