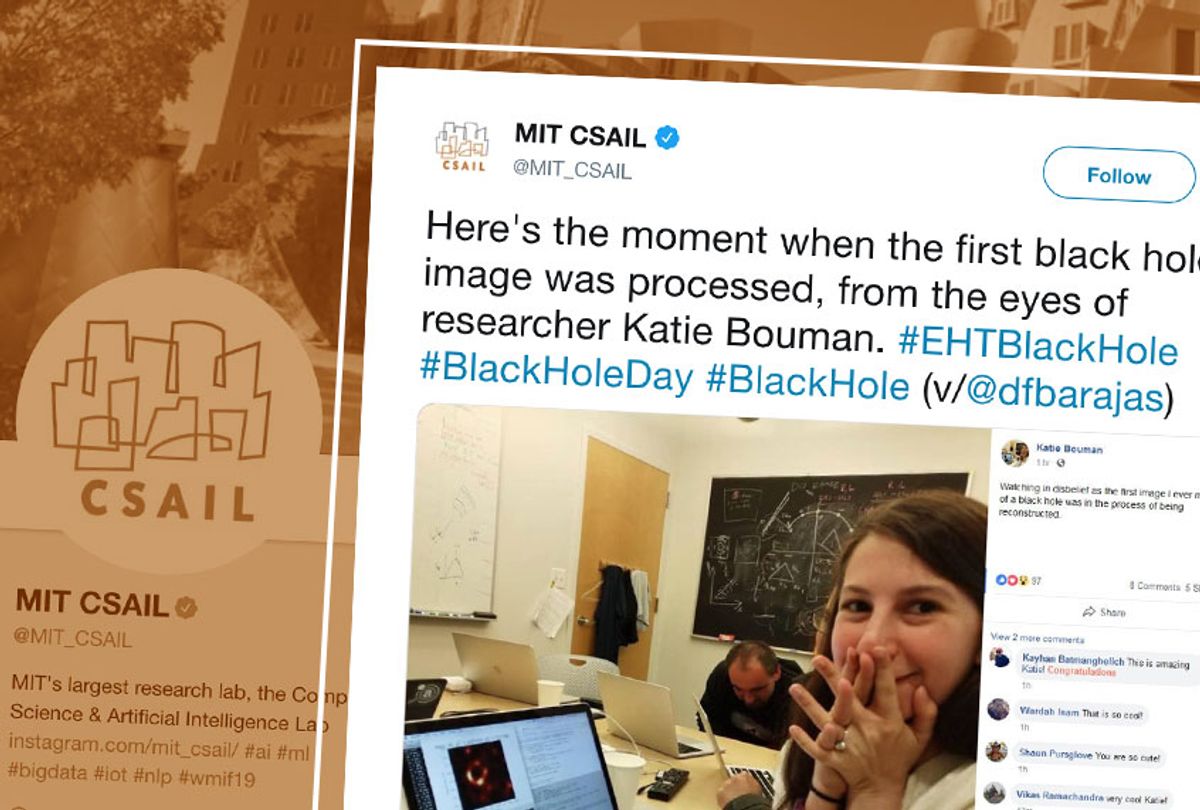 Few could have anticipated that the historic release of the first image of a black hole would devolve into a public spectacle of sexist outrage — though such are the times we live in, in which literally every news item is picked apart by reactionaries.

On April 10, the Event Horizon Telescope Collaboration (EHT) presented the first-ever direct image of a black hole. The blurry composite embodied over two centuries of advances in mathematics, science and electronics. Prior to the image, only artistic illustrations were available to depict the mysterious singularities that warp the spacetime continuum by virtue of their huge masses, producing such gravitational force that not even light can escape. Shortly after the EHT presentation, MIT tweeted an image of Katie Bouman, a 29-year-old computer scientist whose work was crucial to the project, during the moment the first black hole was processed.

Bouman, a postdoctoral fellow with the Event Horizon Telescope and a forthcoming Assistant Professor in the Computing and Mathematical Sciences department at the California Institute of Technology, looked ecstatic in the photograph sitting in front of her computer, her hands covering her mouth in awe. The photograph instantly made her the face of the project — which is why an informal coterie of sexist trolls kicked off a sexist investigation to invalidate her contributions.

A familiar story arc followed. Fake Twitter accounts were set up in her name. Men on Twitter dismissed her scientific contributions as mere feminist posturing. And there was a debate over whether or not she was worthy of a Wikipedia page.

It is hard to imagine the same response would have followed if a white man was in that picture instead of Bouman. Salon reached out to Bouman for an interview, but a representative for MIT said she was no longer taking interviews with the press.

It is no secret that women are underrepresented in science, technology, engineering, and mathematics (STEM) careers. According to 2016 statistics, women represent only 30 percent of the STEM workforce. Often their contributions go unnoticed, as history has shown us. For example, when people think about the mission that brought Apollo to the moon they most likely think of astronaut Neil Armstrong, not, say, Margaret Hamilton, who developed the on-board flight software for the Apollo space program. Placing Bouman at the center of the discovery may have been a conscious optics choice for the MIT research lab, given how STEM fields are often criticized for a lack of gender equality, but the public backlash was almost certainly unanticipated.

Amid the chaos, Bouman wrote in a Facebook post: “No one algorithm or person made this image, it required the amazing talent of a team of scientists from around the globe and years of hard work to develop the instrument, data processing, imaging methods, and analysis techniques that were necessary to pull off this seemingly impossible feat. It has been truly an honor, and I am so lucky to have had the opportunity to work with you all.”

Her response was gracious, and emphasized how big scientific projects happen through collective collaboration. As many have pointed out, her response brings to light the false glorification of the “lone genius” trope in STEM, in which one person is responsible for an ingenious creation. (Even Isaac Newton was famously was uncomfortable with the way he was treated as a singular hero for contemplating gravitation; "If I have seen further it is by standing on the shoulders of giants," he wrote in a letter to fellow natural philosopher Robert Hooke.) Over 200 people worked on the black hole imaging project, and Bouman bringing this to the attention of the public was not an attempt to deflect her credibility or contributions, but to rather remind people that something this monumental in the science world can’t happen without a lot of brains. As Bouman described in her 2016 TED Talk, she likened herself to a forensic sketch artist, but instead she created an algorithm to image a mystery in the universe.

Yet the worst thing about this entire saga is that it may instill fear in young women who want to pursue a career in STEM. The message from the Bouman backlash is that if you are a woman who becomes the face of a massive scientific breakthrough, sexist internet trolls will spend way too much of their time harassing you and trying to disprove your credibility.