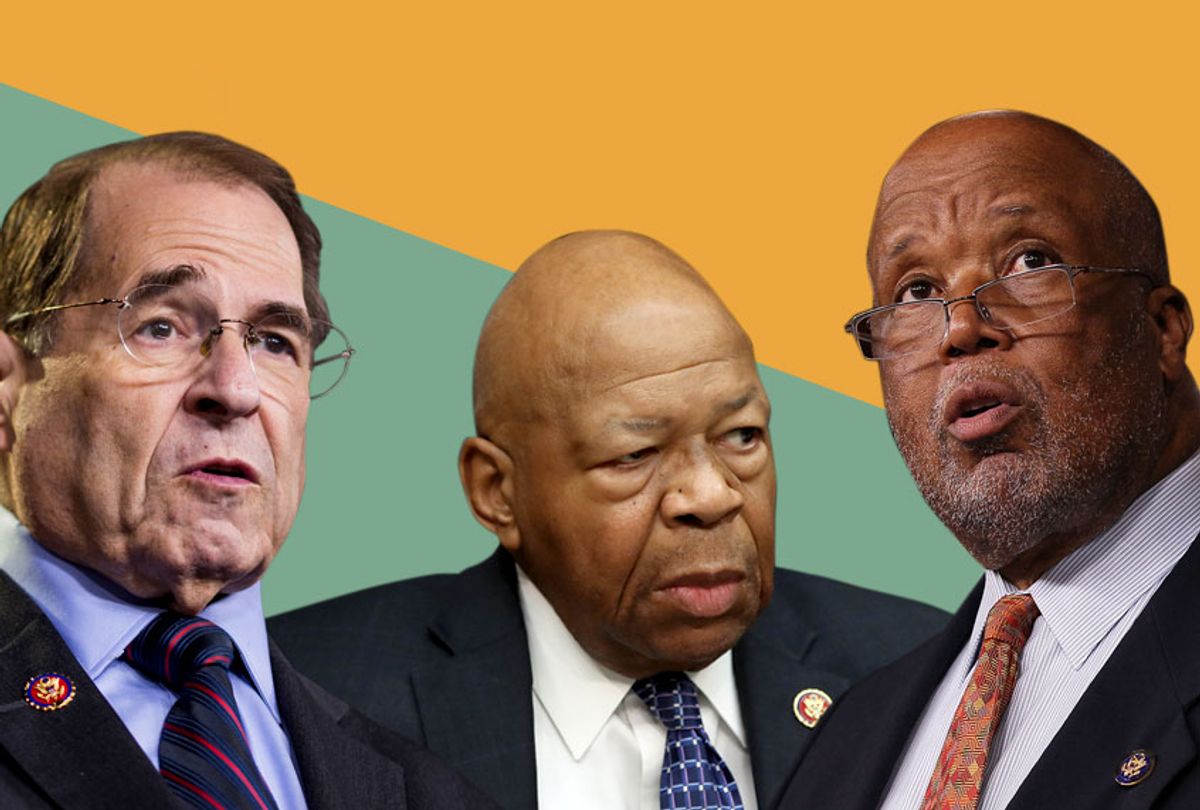 Top Democrats are demanding documents from the White House and the Department of Homeland Security regarding President Donald Trump's proposal to transport immigrants detained at the southern border to so-called "sanctuary cities."

Reps. Jerry Nadler of New York, Elijah Cummings of Maryland and Bennie Thompson of Mississippi, chairmen of the House Judiciary, Oversight and Reform and Homeland Security committees, respectively, asked acting White House chief of staff Mick Mulvaney and acting Homeland Security Secretary Kevin McAleenan for all communications regarding the plan, which has been endorsed by the president.

"We are deeply troubled by multiple reports, recently confirmed by the president, that the Trump administration is considering releasing detained immigrants into congressional districts represented by Democrats in a bizarre and unlawful attempt to score political points," the chairmen wrote Monday in a letter.

"These reports are alarming," the trio added. "Not only does the Administration lack the legal authority to transfer detainees in this manner, it is shocking that the president and senior administration officials are even considering manipulating release decisions for purely political reasons."

Administration officials initially denied the report, which was based on information from whistleblowers and official emails, but Trump later announced his administration was giving "strong" consideration to the plan.

"Due to the fact that Democrats are unwilling to change our very dangerous immigration laws, we are indeed, as reported, giving strong considerations to placing Illegal Immigrants in Sanctuary Cities only," Trump wrote in a series of tweets last week. "The Radical Left always seems to have an Open Borders, Open Arms policy – so this should make them very happy!"

The three House chairmen who authored Monday's letter wrote that the administration's proposal "appears to have been specifically designed to target Democratic districts."

Arguing they are havens for criminal activity, Trump has previously blasted the Democrats for their support of sanctuary cities, vowing to crack down on them. Democrats have argued his plan appears designed to retaliate against lawmakers who oppose his hardline stance on immigration, including his plans to construct a "wall" along the U.S.-Mexico border.

Trump has alleged that a border wall would stop what he has called "an urgent national crisis" at "our very dangerous southern border," which he claimed, without offering evidence, has led to a surge of crime, drugs and human trafficking caused by migrants seeking illegal entry. He has repeatedly told vivid, and at times, disturbing anecdotes of criminal activity at the border in attempt to rally support for his immigration policies.

House Speaker Nancy Pelosi, D-Calif., said last week that she does not know anything about the president's plan, which would allegedly send undocumented immigrants to her district in San Francisco. She called the proposal "just another notion that is unworthy of the presidency of the United States and disrespectful to the challenges that we face as a country, as a people, to address who we are: a nation of immigrants."

News of Trump's proposal arrived last week just days after the president announced the departure of his secretary of Homeland Security, Kirstjen Nielsen, and said Kevin McAleenan, the commissioner of U.S. Customs and Border Protection would replace her as acting secretary of the department. Department of Homeland Security (DHS) Acting Deputy Secretary Claire Grady also stepped down.

The three House chairmen gave the White House and DHS until May 3, 2019 to submit the materials.