"I'll never understand what happened at Columbine": The 1999 school shooting that changed us

A look back at how Salon covered the mass shooting in 1999, and what we've learned since 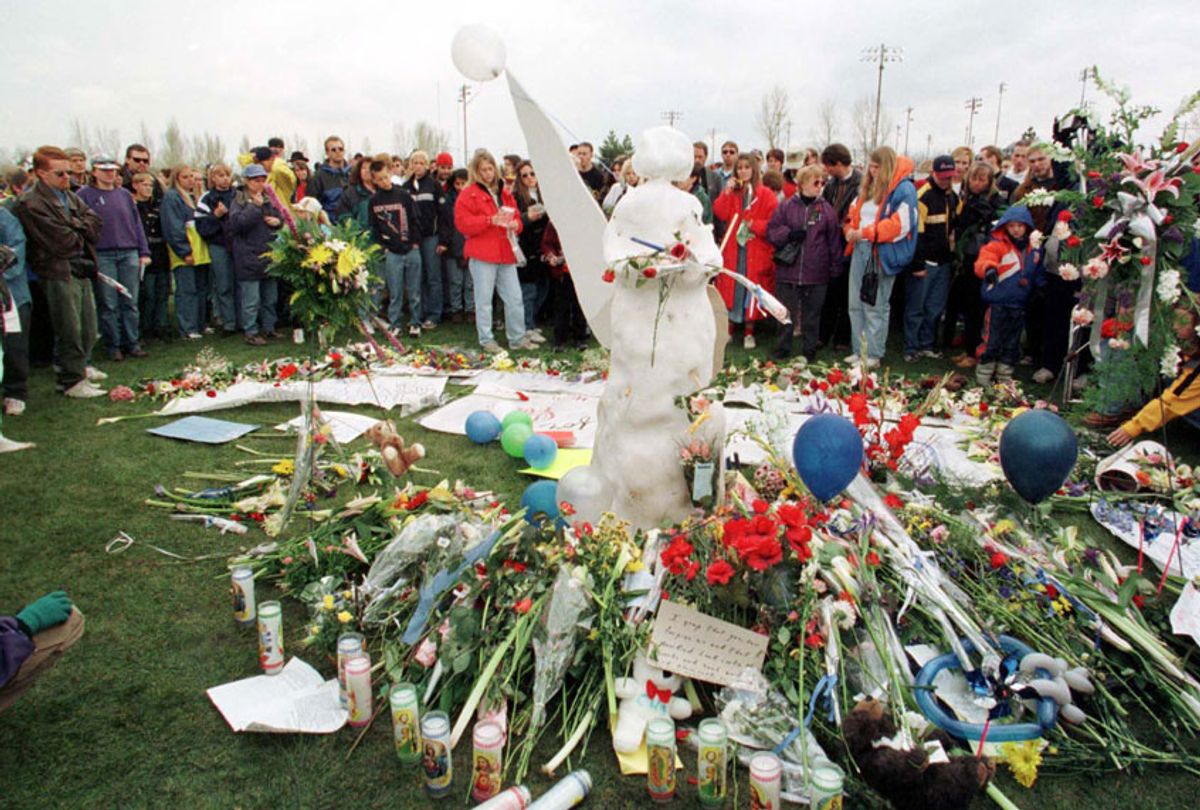 A large crowd circles an angel made of snow leaving flowers during a memorial service 25 April 1999 in rememberance of the students who were killed in the shooting at Columbine High School in Littleton, Colorado. (Getty/Mark Leffingwell)
--

I didn't know it yet on the day, but I was carrying my first child. I did know that I was full of hope at the possibility that I could be. In New York anyway, it was a beautiful spring afternoon.

It began at 11:19 am, Mountain Time. It was all over less than an hour later. It was over when we all heard about it. When did the news start coming in? I don't remember. There were no smartphones then, and no social media. My husband and I shared a flip phone, and that was just "for emergencies." (We bought the second one after 9/11.) On April 20, 1999, Columbine High School students Eric Harris and Dylan Klebold walked in to their school, massacred 13 people, and then turned their guns on themselves.

It's now 20 years — and multiple subsequent mass murders which brought plenty of compelling evidence that thoughts and prayers are not an effective deterrent to violence — later. The daughter who was growing inside me that day has become something Harris's and Klebold's victims never could: a college freshman. My second child is the same age as their three youngest victims. My daughters have, like every other American child born in this century, grown up in a country in which mass shootings are a commonplace tragedy, where children and teenagers are routinely gunned down in and near their own schools. Red Lake High.  Virginia Tech. Sandy Hook. Umpqua Community College. Isla Vista. Marjory Stoneman High. Santa Fe High.  I thought Columbine was an anomaly. It was a beginning.

Salon was part of the Columbine coverage from the very first hours after the shooting. Jeff Stark, Salon's then-arts and entertainment editor, had an immediate and intimate response.

"Nothing ever happened at my high school," he wrote on April 21. "There were parties and proms, fistfights and car accidents, but there was nothing that made it special, nothing that made it remarkably different than any other suburban high school in southwest Denver — or really any suburban high school anywhere. . . . Then on Tuesday, with 16 dead bodies [the toll would later be adjusted to 15, including the shooters] scattered around the cafeteria and the library, my school, Columbine High, became famous. Something finally happened. Two kids in black trench coats — armed with semi-automatic weapons and explosive devices that may have included hand grenades and pipe bombs — swept through the hallways for an hour or so and casually, mercilessly, opened fire on their fellow students. Columbine High School, home of the Rebels, became the home of the largest high school killing spree in American history."

That grim distinction, by the way, would be forfeited on February 14, 2018, in Parkland, Florida.

The in-depth reporting came in quickly as well. On April 21, Dave Cullen filed the first of what would become numerous features on the massacre and the events surrounding it. (In 2009, he would publish the definitive book on the subject, the brilliant, heartbreaking and insightful "Columbine.") He soon began looking more closely at the boys, the school's so-called Trenchcoat Mafia, its jocks, and the social pecking order they all inhabited.

"They were, it seems, outsiders even in the outsider group, and no one could explain why they went on their killing spree Tuesday," Cullen wrote. "A group of football players stood around uneasily Wednesday morning, discussing their anguish, confusion and guilt about the rumor that the rampage was meant for them."

In the aftermath, Cullen continued to investigate the rumors that sprang up about the killers and their motives. "Nobody really liked them, just cause they . . . The majority of them were gay. So everyone would make fun of them," a sophomore soccer player told Cullen about the Trenchcoat Mafia. "They're freaks." It was six months after the hate crime murder of Matthew Shepard in Laramie.

He talked to lead investigator Kate Battan, who told him in September of 1999, "Everybody wants a quick answer. They want an easy answer so that they can sleep at night and know this is not going to happen tomorrow at their school. And there is no such thing in this case. There's not an easy answer. I've been working on this nonstop daily since April 20th and I can't tell you why it happened."

There would be no quick answers, not after all the investigations and lawsuits and punditry and politics. Not after two decades. Not after spending the entirety of my own life as a mother sending my kids off in the morning and praying they make it home safe for dinner. Not after the "incident," as their principal later called it, when a threat was called in to the school. Not after marching in the streets with them after Parkland. Not through four White House administrations. Because all you have to do is look at the body count to understand, undeniably, that this is a country that loves its guns more than its children. My one great hope in life now is knowing that the first wave of babies who came into this world post-Columbine and have survived this far are voting in record numbers.

Twenty years ago, Jeff Stark made a prediction that could not have proven more true. "I'll probably never understand what happened at Columbine High, and neither will you," he wrote. "We will all, however, hear no end to the guesswork, the misunderstanding and the political posturing that Tuesday had President Clinton saying that the nation needs to 'do more to reach out to our children' and 'recognize early warning signs.' The early warning signs of what? Deranged mass killers? High school students with automatic weapons? Alienated kids? Jock-hating, computer-savvy racists? We will never understand what happened here; we will just stop wondering, when we're distracted by the next unfathomable outbreak of chaos."