Avengers and the Star Wars Skywalker saga: It's the end of a universe as we know it

"Avengers: Endgame" and "Star Wars: The Rise of Skywalker" are bringing beloved narratives to a close 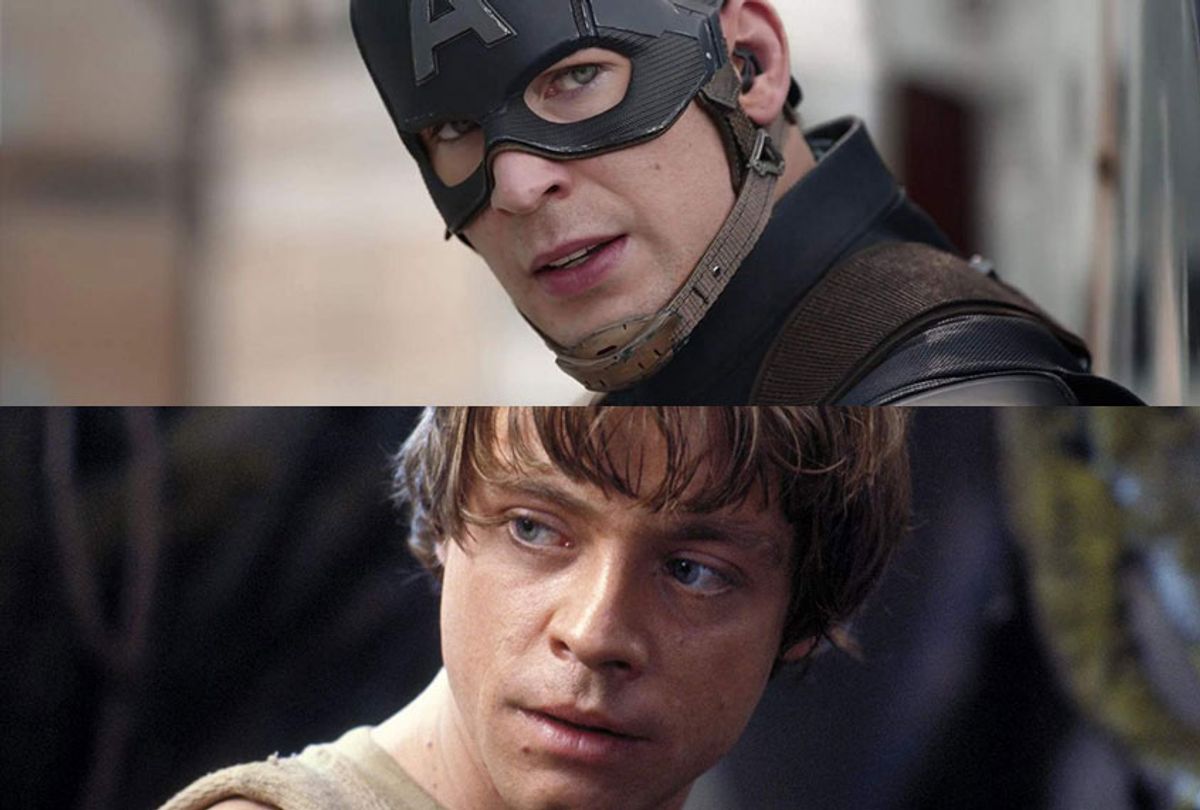 We need a term for that feeling of grief which occurs when our favorite stories come to an end, especially when that mourning occurs on a collective level, even worldwide, such as that which will be felt once "Avengers: Endgame" and, as of December, "Star Wars: The Rise of Skywalker" hits theaters.

Let us assume, for a moment, that the stories we tell ourselves through the movies, books, TV shows and other narrative media we love are in some ethereal sense "real." When a favorite character in a story that you follow meets a tragic fate, you feel genuine pain. That feeling is in many ways compounded when multiple story arcs come to a close at once, when it feels like an era in a fictional universe — or even the actual universe itself — is closing for good. The feeling of that type of loss is quite real, and is arguably all the proof we need that art has as much value as the duller necessities of life.

This was the genius of the latest trailer for "Avengers: Endgame," an adroitly bombastic masterpiece of emotionally manipulative marketing. In the first minute we have references to the "Iron Man," "Captain America," "Thor," "Guardians of the Galaxy," "Doctor Strange," "Ant-Man," "Spider-Man," "Black Panther" and "Captain Marvel" franchises. The oldest of those, "Iron Man," began in 2008, more than a decade ago; the most recent, "Captain Marvel," came out last month. Spoiler alert (but you probably already know this): Four of those franchises are centered around characters who died in a movie released one year ago, "Avengers: Infinity War," including Dr. Stephen Strange (Benedict Cumberbatch) , Spider-Man (Tom Holland) and Black Panther (Chadwick Boseman). The only Guardians of the Galaxy to survive were Rocket Raccoon (Bradley Cooper) and Nebula (Karen Gillan); Star Lord (Chris Pratt), Groot (Vin Diesel), Drax (Bautista) and Mantis (Pom Klementieff) were turned to dust and the genocidal Malthusian of the cosmos, Thanos (Josh Brolin), murdered Gamora (Zoe Saldana).

There may be fans out there who believe these characters are truly dead, and they will go into this movie with a feeling of mourning.

But in reality, we've already seen a trailer for another "Spider-Man" movie (which just had its release date moved up), Captain Marvel (Brie Larson) and Black Panther are not going to be killed off after just one film each, and it is highly unliked Disney rehired James Gunn  (whom they unceremoniously fired after making two great movies) to helm his third "Guardians of the Galaxy" movie around only Rocket Raccoon and Nebula, though perhaps some Guardians will be permanently killed.

Knowing fans understand, however, that the characters we're more likely to say goodbye to permanently are what one might call the Old Guard, the ones who survived at the end of "Avengers: Infinity War" (probably not a coincidence) and now must save the universe one last time. They include Iron Man (Robert Downey Jr.), Captain America (Chris Evans) and Thor (Chris Hemsworth), who share three movies a piece (dating back to 2008 for "Iron Man" and 2011 for "Captain America" and "Thor), plus The Incredible Hulk who had his own (underrated) standalone movie in 2008, not to mention various tertiary characters. Even if they don't die, they may never again appear in the Marvel Cinematic Universe.

We find ourselves in a similar situation with "Star Wars: The Rise of Skywalker." When "Star Wars" (the movie, not the franchise) was released in 1977, it was a standalone project. Eventually a mythology built up around the story and franchise creator George Lucas (who only directed the first movie in the original trilogy) said that there had been a plan for nine movies, a literal trilogy of trilogies. The two sequels to "Star Wars," released in 1980 and 1983, were regarded as great and good respectively, while the prequels (all of which Lucas directed) are regarded as lesser, and the sequels (made after Lucas sold the series to Disney, which owns Marvel) remain controversial.

Now one movie plans to tie them all together. Plans to possibly go beyond Lucas's original nine-movie vision for this storyline have been abandoned, at least for now, meaning that every story thread established in eight previous movies needs to be wrapped up in a satisfying way here. Classic characters like Luke Skywalker (Mark Hamill), Chewbacca (Peter Mayhew, Joonas Suotamo, Ben Burtt) Lando Calrissian (Billy Dee Williams), and even robot sidekicks C-3PO (Anthony Daniels) and R2-D2 (Kenny Baker and Jimmy Vee) need to have their stories wrapped up, as does a character who seems to have been reintroduced, Emperor Palpatine (Ian McDiarmid). Because one iconic character, Princess Leia, is played by an actress who has since tragically died (Carrie Fisher), we know with certainty that her story will conclude. And of course there are the new characters introduced in the sequel trilogy — including Rey (Daisy Ridley), Finn (John Boyega), Kylo Ren (Adam Driver), Rose Tico (Kelly Marie Tran) and Poe Dameron (Oscar Isaac) — who have to inherit the legacies of the old ones.

Much as, one might say, the new Avengers will have to replace the old ones in "Avengers: Endgame."

Either way, that means that we will never be able to experience many of the characters from these various universes ever again. We may see other iterations of these characters in other media, but the ones that shaped the cultural history of the planet — as masterminded by Marvel Cinematic Universe creator Kevin Feige in 2008, and George Lucas before him in 1977 — have officially delineated their beginning, middle and end. No new tales from those sagas will be told — if the advertising is to be believed.

Whether you're among the millions who think the "Infinity War" deaths are permanent or the millions who follow the marketing logic, fans are going to walk into "Avengers: Endgame" feeling a real sense of grief and dread. That trailer is a brilliant synthesis of storytelling prowess and marketing strategy, as to a lesser extent is the new trailer for "Star Wars: The Rise of Skywalker" (which really only had one highlight, the realization that Palpatine is coming back). People who have been following "Star Wars" starting at any point over the last 42 years will bring their own fears and anxieties to the closing chapter.

Of course, I'm only describing several of the many franchises that exist, not all of them owned by Disney. My colleague Melanie McFarland wrote a fantastic article that focuses on the "Game of Thrones" franchise, about which she argued that this series has one advantage that Marvel and the "Star Wars" series lack:

A broader unknown is whether 2019 or 2020 may one day be looked upon as a turning point in cultural myth-building, as the years when we decided, en masse, that a saga does not have to end in peace and light so long as the ending rings true.

Of course, as McFarland also notes, the "Game of Thrones" series has a liberty to be truly dark in ways that the "Avengers" and "Star Wars" movies dare not. Yet all three have the advantage of being set in larger fictional universes that can easily be mined for more storylines. Sometimes they work (Marvel), sometimes they don't (see the "Star Wars" prequels), but none are entirely gone as long as money can still be made from them. Nevertheless, the reality of known or likely spin-offs didn't lessen the pain felt by "Harry Potter" and "The Lord of the Rings" fans when the main series in those franchises came to an end.

The stakes are very high for a lot of stories within the Marvel Cinematic Universe and Star Wars universes, and while both are more predictable than "Game of Thrones," they have still touched the lives of billions of people. Time will tell if their narratives outlast the current generations of fans, but the end of these storylines certainly will affect the millions who knew them when they were still being born and those who will only know of them after they were completed.

There is a scene in "Avengers: Infinity War" that sums up why I believe people are drawn to the Happy Ending stories like those from the MCU and Star Wars. It's when Dr. Strange uses his superpowers to learn about all of the alternate futures for the war against Thanos. Star Lord asks how many he saw and the reply is "Fourteen million six hundred and five." He is asked how many saw the good guys win.

In a world where global warming and other forms of pollution, war, poverty, disease and inevitability of our own mortality plague us with doubt, a story in which a 14,000,605-to-1 odds can be attained speaks to our deepest selves.