Trump's shameless obstruction of justice shows no signs of stopping

With the president thumbing his nose at the law, the only reasonable response is to start impeachment hearings 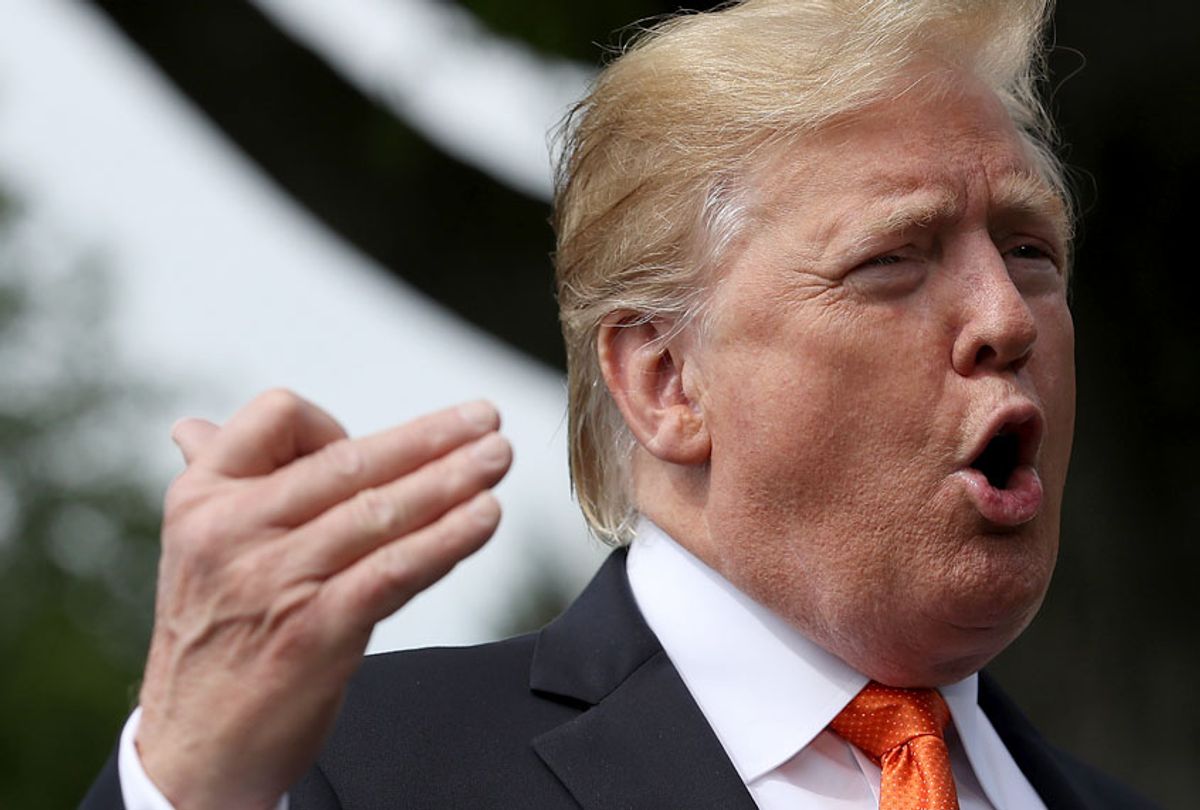 Last week, the public finally got to read (most of) a report by special counsel Robert Mueller detailing the results of an investigation into Donald Trump and his campaign's involvement with Russian efforts to interfere with American democracy and Trump's efforts to obstruct justice. The report was damning enough, chronicling both the Trump campaign's extensive efforts to collude that, only through sheer incompetence, failed to rise to the level of criminal conspiracy, and multiple instances of obstruction that would likely lead to criminal indictment if Trump wasn't a sitting president.

But even though the investigation is done and the report has been released, according to new reports out, both the collusion and the obstruction are ongoing. The Democrats who control the House of Representatives might as well start impeachment hearings now. With Trump committing misdeeds faster than Democrats can schedule hearings to investigate misdeeds, they can do so with the assurance that it'll never get to a vote while Trump's still in office.

With former Homeland Security Secretary Kirstjen Nielsen out of office — basically fired on the grounds of insufficient racism — reporters are getting their fair share of stories from an anonymous "former senior administration official" eager to share tales of White House dysfunction that nonetheless paint Nielsen in a good light. The latest, from the New York Times, is particularly disturbing, in light of how clear it is that the Russian government fully intends to escalate its criminal interference in American politics for the 2020 election.

The article reports that Nielsen had become "increasingly concerned about Russia’s continued activity in the United States" and was particularly worried about "new techniques to divide Americans using social media, to experiments by hackers, to rerouting internet traffic and infiltrating power grids."

But when she tried to bring up these concerns to Trump, White House chief of staff Mick Mulvaney told her not to, arguing that "Trump still equated any public discussion of malign Russian election activity with questions about the legitimacy of his victory."

This backs up other reports that show that the White House, while not actively trying to prevent American intelligence services from dealing with Russian attacks on American democracy, also refuses to offer any support or possibly even acknowledge that there's a problem.

The obvious reason the Trump administration doesn't want to help stop the Russian interference is that they believe that it benefits them. This is in line with what the Mueller report showed, which is that Trump and his campaign staff repeatedly tried to conspire with the Russian government's efforts, but were unsuccessful due only to incompetence. Which is to say, this is a passive form of collusion, similar to a pawn shop that pretends  not to know that they're fencing stolen goods.

Similarly, the efforts at obstructing justice not only are ongoing, but seem to be multiplying in response to the increased pressure from newly empowered Democrats. As the Washington Post reported Tuesday evening, Trump "is opposed to current and former White House aides providing testimony to congressional panels" and his administration plans to launch all-out legal warfare against any effort to subpoena witnesses and obtain documents.

This echoes the behavior recorded by Mueller, who laid out an eye-poppingly extensive campaign by Trump to hide information, lie to prosecutors, and otherwise obstruct federal investigations into any potential misdeeds by Trump or his allies. Trump continues to — publicly, shamelessly — do everything in his power to obstruct justice and evade any efforts to learn more about his conflicts of interest and potential crimes.

Trump not only gleefully missed Tuesday's deadline to release his tax returns, but his plan is to use a bunch of pointless and likely doomed litigation maneuvers as a stalling mechanism to prevent the release of his financial information. On Monday, Trump sued both his own accounting firm and Rep. Elijah Cummings, D-M.D., to block the subpoena from the House Oversight Committee, which Cummings chairs, into Trump's financial records.

Trump's legal team is using a frankly silly argument, saying that as there's "no possible legislation at the end of this tunnel," Congress has no legal authority to exercise oversight powers. The team claims that only the Department of Justice should be involved in such investigatory matters.

Of course, as Trump's lawyers know, the Department of Justice has done some investigating in this matter, but punted the legal responsibilities to Congress on the grounds that the Justice Department can't indict a sitting president. So Justice can't deal with him on the grounds that it's Congress's job, but Congress can't deal with him because that's Justice's job. Trump's lawyers, in essence, are trying to establish that the president is above the law.

It probably won't work as a legal argument (though with the Supreme Court stuffed with right wing hacks, anything is possible). But then again, it's not really meant to. Instead, the strategy seems to be to tie up the subpoenas in court for as long as possible — ideally, until after the election — through frivolous litigation. Since that is only 19 months away, it's not impossible for this strategy to work.

There is good news, however. While strong majorities of Trump voters will stand by him no matter how blatant his corruption or  how shamelessly he obstructs justice, there is reason to believe that the metastasizing scandals are demobilizing Trump's supporters at the margins.

As political scientist Michael McDonald pointed out on Twitter Tuesday, Census data about the 2018 election shows a surprising drop in the share of the electorate that is white non-Hispanic from 2016 to 2018. It's small — from 73.4% to 72.8% of the voters — but significant, because the non-Hispanic white share of the vote tends to go up during midterm elections and down during presidential elections, due to more people of color sitting out midterms.

What this means is either more people of color turned out to vote in 2018 than usual for midterms or more white people stayed home, or some combination of the two trends. While race is hardly a stand in for political affiliation, it's also undeniable that most white people vote for Republicans, including Trump, and most people of color vote for Democrats. So these numbers, which helped Democrats gain 40 seats in the House in November, suggest that Trump's over-the-top corruption is having a mobilizing effect on his opposition and demobilizing effect on his support.

All of which is why it's time for Democrats to move beyond fears of beginning impeachment hearings. I used to be skeptical of impeachment, fearful that it could backfire if and when the Republican-controlled Senate failed to convict Trump. But with the Mueller report out and Trump responding only by escalating the criminally suspicious behavior he engages in, there's good reason to think that starting impeachment trials will not only be the right thing to do, but will benefit the Democrats.

Trump's guilty-acting behavior in response to the Mueller report has caused his approval ratings to go down again, after all, with 57% of Americans expressing disapproval of Trump. If Democrats start impeachment hearings, Trump will almost certainly escalate his obstruction and his public temper tantrums, making it impossible for the public to ignore that he acts as guilty as anyone has ever acted in the history of criminal investigations. And it also means there's no reason to rush to a vote on impeachment, as Trump will keep taking actions that further open up criminal liability, adding to the list of things that need investigating and to the already long list of potential articles of impeachment.

At a certain point, even people who may not hate Trump as much as his fiercest opponents do might simply want him and the entire circus to go away, and the quickest and surest route to that is voting him out of office.

Either way, Trump has made it clear that he not only doesn't feel shame about either collusion or obstruction, but fully intends to continue both, so long as he can get away with it. With the president thumbing his nose at the law so blatantly, the only reasonable response is to start impeachment hearings. Otherwise, it will just encourage more law-breaking from future Republican candidates.