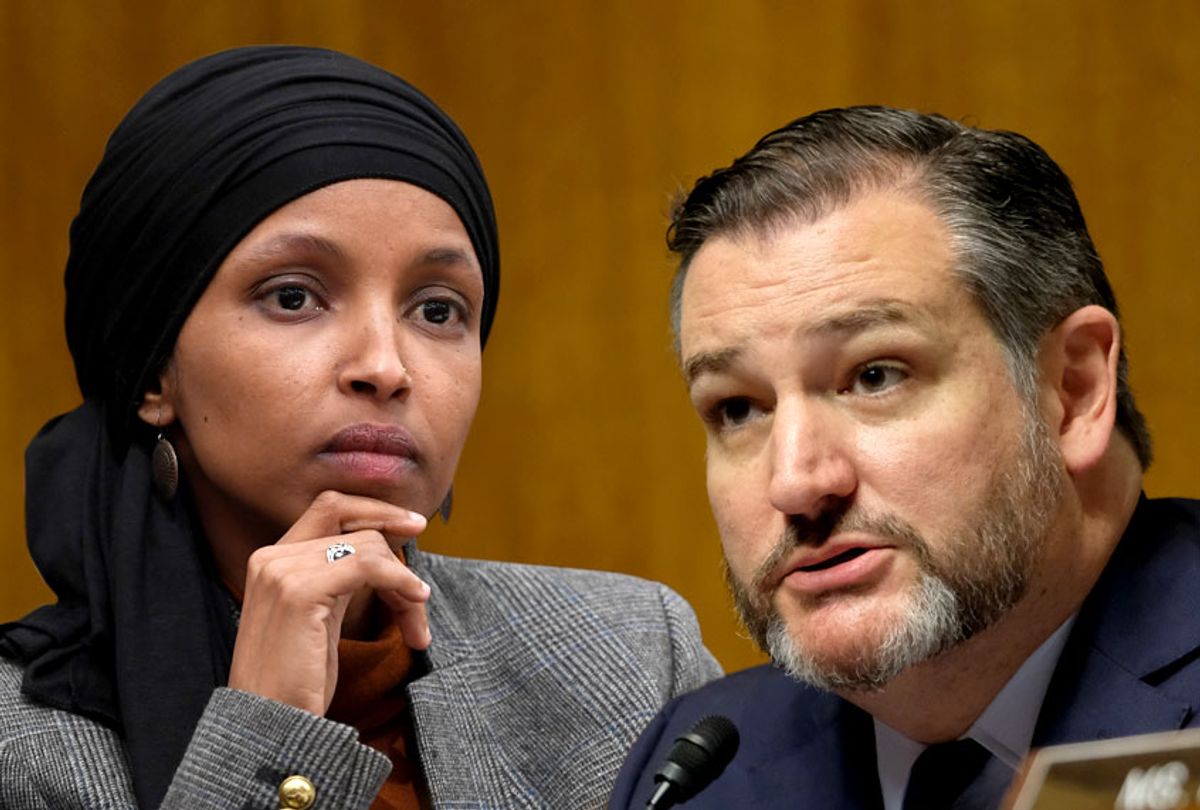 Another violent white supremacist has violently attacked Jewish worshipers in their house of prayer, and Rep. Ilhan Omar, D-Minn., once again finds herself fending off bad-faith attacks from her Republican colleagues in Congress. The GOP’s grotesque response to another anti-Semitic murder committed by a white supremacist is, of course, not to examine the far-right ideology they have enabled but ito blame a Somali-American Muslim woman.

Hours after a gunman opened fire Saturday at the Chabad of Poway synagogue near San Diego, killing one person and injuring the congregation's rabbi, several Republicans who had remained silent about the the rise of domestic terrorism from radicalized white supremacists in the Trump era rushed to point a finger at the freshman representative for stoking the latest violent attack.

“The anti-Semitic Left . . . is getting worse,” Sen. Ted Cruz, R-Texas, tweeted after the attack. He tagged Omar’s account and claimed that she “repeated anti-Israel slurs,” adding, “Responsible Dems need to say Enough is Enough.”

As Omar pointed out in a tweet defending herself against her colleague's attack, in his rush to blame Omar and the Democrats, Cruz failed to even make mention of Saturday's synagogue attack, which took place during Passover.

"A white nationalist literally terrorized a synagogue during Passover yesterday and you have yet to say anything," Omar shot back at Cruz. "Shame on you."

Fellow Texas Republican Rep. Chip Roy also seized on the anti-Semitic terror attack to condemn Omar, rather than the actual terrorist. When Sen. Kamala Harris, D-Calif., tweeted about the shooting and said "Anti-Semitism is real in this country and we must not be silent -- enough is enough," Rep. Roy retweeted and tagged Omar.

Omar, who came to America as a refugee from the constant war and turmoil of Somalia, has come under intense criticism and in recent months from both Republicans and Democrats for what were perceived as borderline anti-Semitic remarks about Israel and Prime Minister Benjamin Netanyahu. She was forced to apologize for a tweet suggesting that the AIPAC, a major pro-Israel lobbying group, exerts undue influence over members of Congress. (This is arguably true, and extends to many members who are not Jewish.) She has since faced criticism for calling out white supremacy and accusing White House policy adviser Stephen Miller of carrying out a white nationalist agenda on immigration. (That part is inarguably true.)

Conservative pundits like Meghan McCain have also used the Passover shooting at Poway to pounce on Democrats and Omar. Appearing on ABC’s “This Week with George Stephanopoulos,” McCain brought up Omar unprompted.

“When we’re having conversations about anti-Semitism, we should be looking at the most extreme on both sides,” the co-host of “The View” said. “I would bring up Congresswoman Ilhan Omar and some of her comments that got so much attention.”

It is no surprise that Republicans would descend to blaming a black Muslim woman for the apparent actions of a white Christian man, who reportedly has also told police he was responsible for an arson attack on a local mosque. What is more disheartening realization is that Omar's Democratic colleagues appear disinclined to come to her defense or even to explicitly condemn the Islamophobia being inflamed by their Republican colleagues.

The alleged shooter at Poway is the 19-year-old son of a preacher and teacher whose self-proclaimed online manifesto mentioned "white genocide" through Muslim and Mexican immigration aided by Jewish groups. He cannot be credibly linked to a freshman representative who is herself an immigrant belonging to a group he despises. For the moment, it appears Omar will stand alone every time a Republican tries to deflect attention from the right’s responsibility for spreading rhetoric that appears to inspire such attacks.

"My heart is breaking after today's deadly shooting at Chabad Congregation in San Diego — on the last day of Passover and 6 months to the day after the Tree of Life shooting," Omar wrote on Twitter in the wake of Saturday's attack. "We as a nation must confront the terrifying rise of religious hate and violence. Love trumps hate."