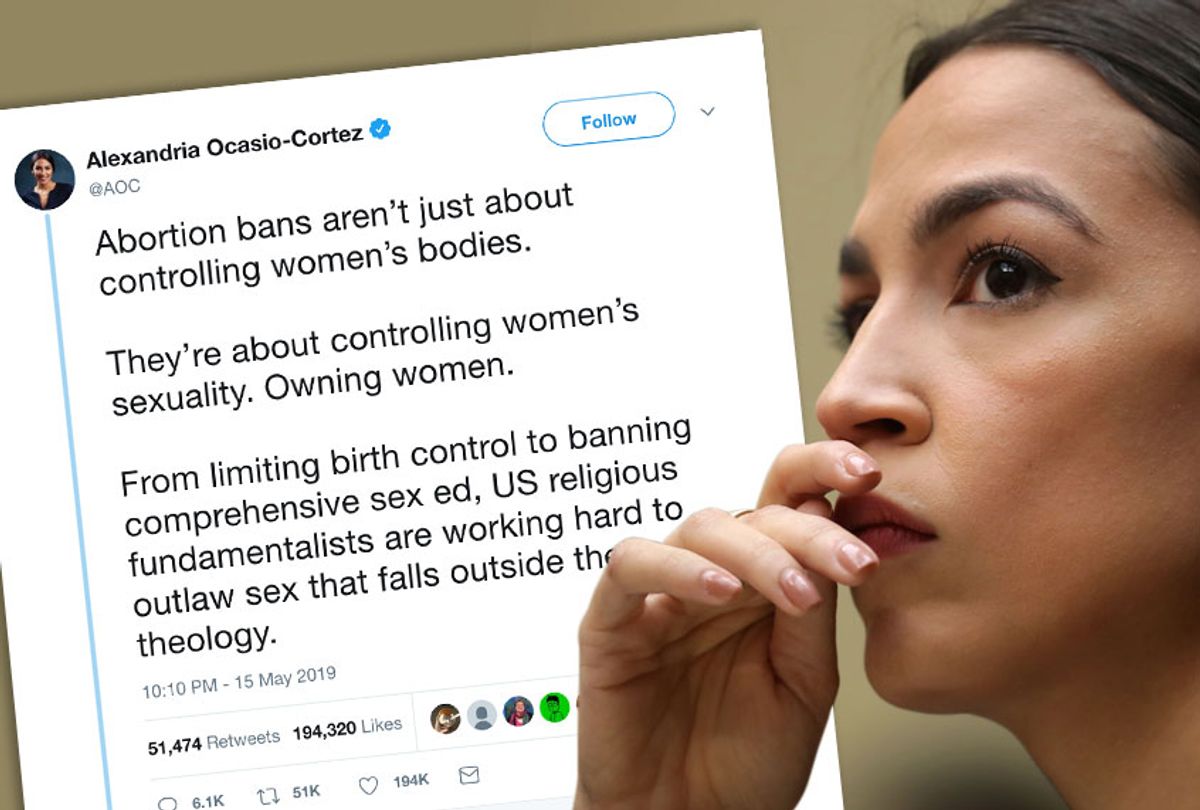 Rep. Alexandria Ocasio-Cortez, D-N.Y., has joined the widespread and growing criticism of restrictive abortion bills that have been signed into law this year in various states across the country, setting up a direct challenge Roe v. Wade, the landmark U.S. Supreme Court decision from  1973 that said a woman has a constitutional right to end a pregnancy until the fetus is developed enough to live outside the uterus.

Missouri's Republican-controlled Senate voted early Thursday to ban abortions eight weeks into pregnancy — even in cases of rape, incest or human trafficking. The bill says a non-complying doctor could be charged with a felony and face up to 15 years in prison for performing an abortion in most circumstances.

The measure, known as the Missouri Stands for the Unborn Act, came a day after Alabama's governor signed into law a ban on abortions at any time absent a medical emergency. It places Missouri in line with states including Georgia, Ohio, Kentucky and Mississippi that passed so-called "heartbeat" bills that outlaw abortions once a fetal heartbeat can be detected, which can be as early as six weeks and before many women know they are pregnant. Utah and Arkansas also voted to ban the procedure after the second trimester.

In the wake of attempts to restrict the procedure, the freshman congresswoman tweeted Thursday that abortion bans "aren't just about controlling women's bodies."

"They're about controlling women's sexuality. Owning women," she continued. "From limiting birth control to banning comprehensive sex ed, US religious fundamentalists are working hard to outlaw sex that falls outside their theology."

"Ultimately, this is about women's power," Ocasio-Cortez wrote in a second tweet, adding that "when women are in control of their sexuality, it threatens a core element underpinning right-wing ideology: patriarchy."

"It's a brutal form of oppression to seize control of the 1 essential thing a person should command: their own body," she added.

The bills in Alabama and Missouri have moved through the states at a time when opponents of legal access to abortion nationwide have been emboldened by the transformation of the Supreme Court with the confirmation of Justice Brett Kavanaugh, which secured a conservative majority on the nation's highest court for decades to come.

In Alabama, a conservative state where Republicans have long dominated politics and there are just three abortion clinics that regularly provide care, has a documented history of attempting to curb abortion access. Last year, voters supported an amendment to the Alabama Constitution declaring that the "public policy of this state is to recognize and support the sanctity of unborn life and the rights of unborn children, including the right to life."

Before Thursday's vote in Missouri, the Show-Me State already had highly restrictive abortion laws. Women seeking abortions have just one clinic — Planned Parenthood in St. Louis — that provides the procedure.

Other Democratic lawmakers condemned the latest efforts by Republicans to curtail abortion access across the country.

"Republicans are on the march to overturn Roe v. Wade. And thanks to Donald Trump stacking the courts with anti-choice judges, that could be a real possibility," Sen. Elizabeth Warren, D-Mass., a 2020 Democratic presidential candidate, said in a statement. "Access to safe, legal abortion is a constitutional right — and we're going to fight this with everything we've got."

"Right now I am calling for it, even though obviously with Mitch McConnell and a [majority Republican] Senate, we would not see a vote," if it were introduced in Congress today, he told BuzzFeed News on Wednesday. "We need to pass it through the House and Senate, and I look forward to signing that law when I become president."