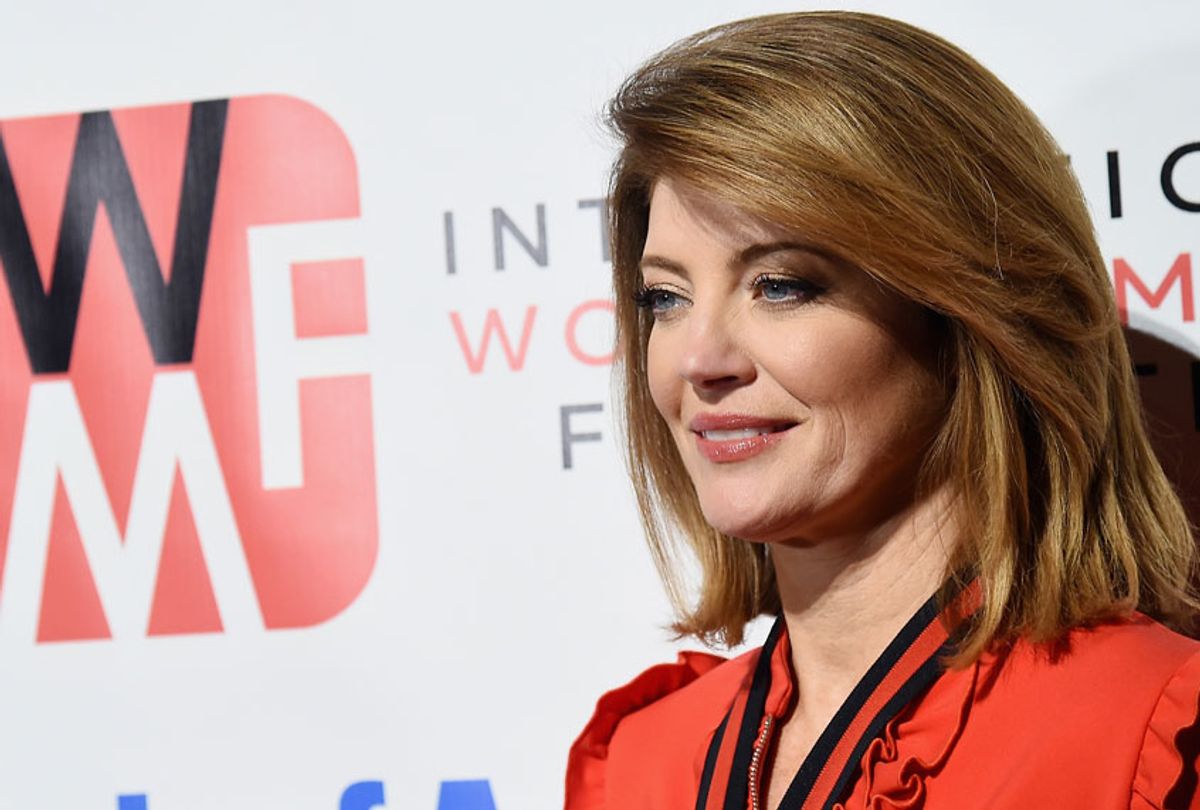 On Thursday morning Norah O’Donnell said her final farewell to “CBS This Morning,” and as her co-worker Gayle King introduced a montage of O’Donnell’s morning show highlights, a few bars of Beyoncé’s “Run the World (Girls)” bounced in the background.

Following clips of interviews with an array of prominent political figures and other newsmakers, the reel changed over to a series of congratulations videos, offered by everybody from Lynda Carter and Deborah Norville to Fox News anchor Bret Baier and Sen. Lindsey Graham (R-SC).

Producers even included words of good wishes from O’Donnell’s future evening news competition, as NBC News’ Lester Holt, ABC’s David Muir and CNN’s Anderson Cooper all conveyed their felicitations. But they saved one of the most significant declarations for close to last.

“Honestly,” says Katie Couric in her portion, “America is ready for Norah at night — even though it sounds a little racy, doesn’t it?”

Back in 2006, when Couric became the first woman to be named solo anchor of an evening network newscast, many questioned whether audiences were ready to accept the former face of NBC’s upbeat “Today” as CBS' frontperson for hard news.

Initially it didn’t seem to be, an assessment that had less to do with Couric’s ability, gender or her familiarity as a morning newscaster than the network’s decision to revamp the evening newscast to play up her strength as a features specialist. At first CBS tweaked its nighttime newscast to adopt a softer approach, an effort to match what they perceived to be Couric's gentler personality.  Viewers did not approve.

Over time, and following a few misfires, “CBS Evening News with Katie Couric” — a very different animal from the Dan Rather and Walter Cronkite eras — won enough respect to garner the Edward R. Murrow Award for best newscast twice, once in 2008 and again in 2009.

Diane Sawyer became the second woman to solo anchor an evening newscast in 2009, this time for “ABC World News.” She remained in her seat until 2014, three years after Couric left CBS. Five years later, O’Donnell makes three. "CBS Evening News with Norah O'Donnell" is set to debut this summer in New York before moving to its permanent home in Washington, D.C. this fall — familiar territory for the anchor, who spent more than a decade with NBC as MSNBC's chief Washington correspondent and a White House correspondent for the company's broadcast news arm.

There was a time when morning and evening news were perceived as so dissimilar that crossing over from the sunnier climes of a.m. to the harder territory of evening news seemed nearly inconceivable. Couric changed that perception, but only after she was given sufficient time to make her case. Couric also enjoyed the unique luck of landing the  interview with former vice presidential contender Sarah Palin in which she easily revealed the Alaska politician to be a moron.

But it’s also noteworthy that when ABC took a chance on elevating a morning news anchor to its evening news chair, it chose “Good Morning America” co-anchor Charles Gibson in 2006 before handing the reins to Sawyer in 2009.

Many more men have occupied these chairs over the years than these three women.

Now, evidenced by the audience fascination with “The View," "GMA" and "Today," morning television shows are driving most of the conversation related to network news. When a news division’s clip goes viral, it typically originates not from the evening news telecasts but from these shows.

There are a few exceptions, such as Lester Holt’s May 2017 interview with Donald Trump in which the president claimed he intended to fire James Comey, a moment cited by some as evidence of obstruction of justice. But network morning news is still the main go-to destination for consumers eager to get the broad strokes of the day’s headlines as accompaniment to their morning coffee. These shows are also the most reliable profit sources for broadcast news divisions.

Ratings-wise “CBS This Morning” is still recovering from the ouster of former co-host Charlie Rose stemming from multiple sexual harassment allegations. But recently O’Donnell and King have drawn positive attention for not just snagging major exclusives, but handling them with aplomb.

King's renegotiated contract with CBS places her at center stage on "CBS This Morning." She's the most recognized name in a newly revamped morning lineup launching Monday that includes Anthony Mason and Tony Dokoupil as her co-hosts. Powering this was her attention-seizing interview with R. Kelly, in which she reacted to his explosive tirade by remaining unfazed and asserting absolute control.

O’Donnell, meanwhile, has a facility with vacillating between softer approaches and drilling into tough lines of questioning. Her interview with Sen. Martha McSally (R-AZ) after the official revealed she was sexually harassed and assaulted while serving in the military demonstrates this balance.

CBS’ latest morning and evening shake-ups are the work of recently promoted longtime news producer Susan Zirinsky, who assumed the job of president of CBS News in January. Zirinsky’s takeover was a necessity given the variety of #MeToo-related problems in the news division, including the firing of former CBS News chairman and “60 Minutes” executive producer Jeff Fager due to several accusations of inappropriate conduct.

Zirinsky is the power behind O’Donnell’s rise to anchor, which bumps Jeff Glor out of a position he’s held since December 2017.  And while Glor wasn’t able to leverage into better ratings for CBS during his short time at the desk — his future role at the network, if any, is still a subject of speculation — O’Donnell’s familiarity to CBS’ morning audiences should help in this regard.

That said, the anchor title at CBS over the decades has proven to be more changeable and temporary than at either of its rivals. ABC’s evening newscast has been helmed by four solo anchors since its 1978 rebranding as “World News Tonight” with Peter Jennings at the helm. (Only for a short time since then did ABC employ co-anchors, with Bob Woodruff splitting the role with Elizabeth Vargas in 2006 before Gibson stepped in.)

NBC’s weeknight evening newscast has had five names associated with it since 1970: John Chancellor and David Brinkley co-anchored until Tom Brokaw took over in 1982. He continued until 2004 when Brian Williams took the chair, where he stayed until 2015. Williams might still be there if he hadn’t been caught fabricating details in his reporting on Hurricane Katrina and the Iraq War. Since 2015, Holt has served as NBC's evening anchor and frequently splits ratings victories with ABC and David Muir.

In the first quarter of 2019, for example, "ABC World News Tonight with David Muir" was No. 1 in total viewers, and "NBC Nightly News with Lester Holt" snagged the top rating position among the target demographic of adults 25-54.

So in one respect, O’Donnell can only improve the fortunes of third-place ratings finisher CBS News and the network in general when she makes her evening anchor debut. Then again, she’s also the eighth solo anchor CBS News has introduced since Dan Rather left in 2005. Before him came Douglas Edwards — the first anchor of a regularly scheduled, network television news program starting in 1948 — and the man who defines what it means to be a network news anchor, Walter Cronkite, whose tenure ran from 1962 until 1981.

And there’s the question of whether anything can be done to recapture a news audience that increasingly gets its information from online sources or turns to cable in times of crisis or for live event coverage.

NBC, fortunately for O’Donnell, demonstrated what not to do by hiring Megyn Kelly from Fox News and reaping a PR nightmare in turn, first when she flamed out in her solo evening news magazine debut and finally when she thought she was being relatable and honest by wondering aloud why wearing blackface at Halloween is wrong.

But is it even possible for CBS News to regain its footing and its stability, by returning to the style of hard news reporting Cronkite and Edward R. Murrow made famous? It could very well be that the evening newscast success can be found in returning to classic methods in addition to capitalizing on the type of ratings-spiking exclusives O’Donnell is skilled in facilitating, bringing a touch of morning show news-making into a medium dominated by staid evening newsreaders. Women are still too few and far between at this level of network news to markedly change things, but at least a couple of them are in a position to create some shift.