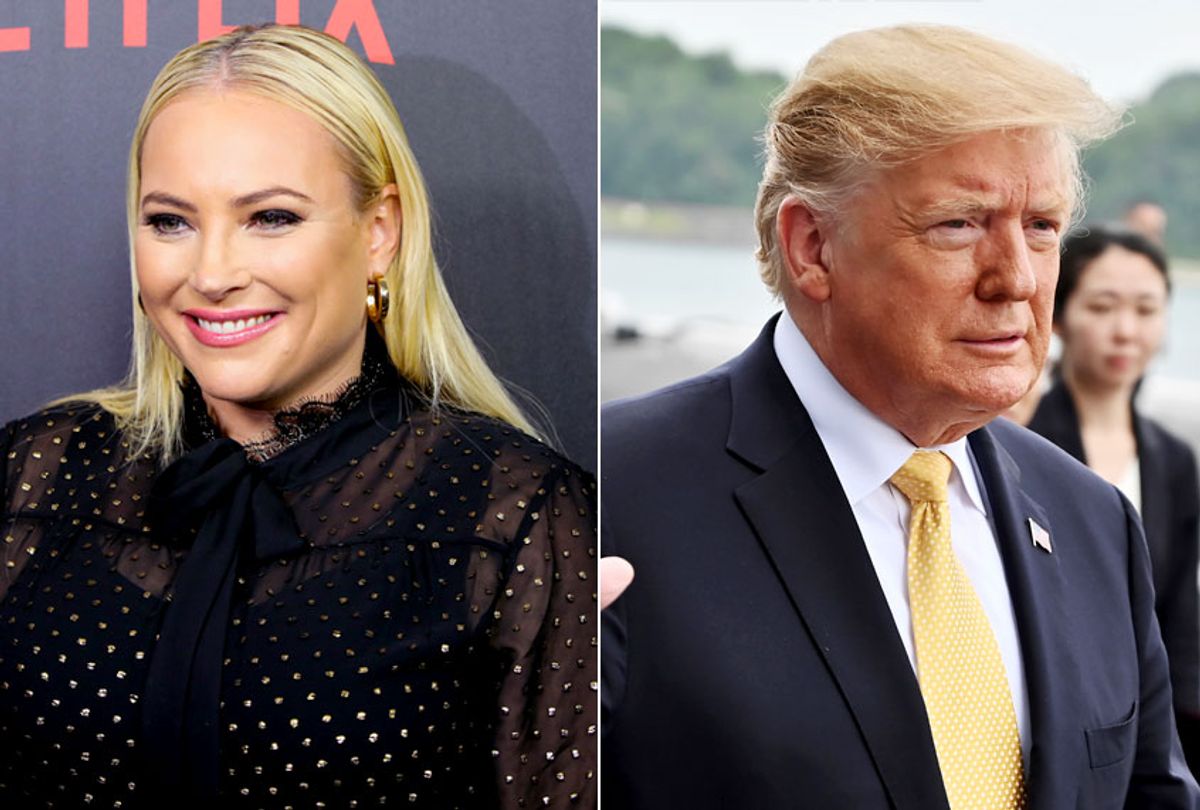 Meghan McCain, a conservative co-host of "The View," took aim at President Donald Trump after the Wall Street Journal reported Wednesday night that the White House had instructed the U.S. Navy to obscure the warship USS John S. McCain ahead of the president's visit to Japan.

"USS John McCain needs to be out of sight," an official reportedly wrote in an email detailing plans for the president's arrival in Japan. "Please confirm #3 will be satisfied."

The vessel is named after the father and grandfather of the late Republican Sen. John McCain, a celebrated American war hero who has repeatedly drawn Trump's ire. The senator's name was added to the ship in 2018.

"Trump is a child who will always be deeply threatened by the greatness of my dads [sic] incredible life," the late senator's eldest daughter, Meghan McCain, who co-hosts the television show "The View," McCain tweeted Wednesday night in response to the news. "There is a lot of criticism of how much I speak about my dad, but nine months since he passed, Trump won't let him RIP. So I have to stand up for him."

"It makes my grief unbearable," she added.

Trump denied he had anything to do with the reported request to move the naval vessel "out of sight" during his recent state visit to Japan, tweeting that he was "not informed about anything having to do with the Navy Ship USS John S. McCain."

He again denied knowing about the reported instructions Thursday morning, telling reporters outside the White House, "I don't know what happened. I wasn't involved. I would not have done that."

Trump added that he was "very angry" with the late GOP senator, because of his vote to narrowly defeat a so-called "skinny" bill that would have repealed part of Obamacare in 2017. Trump added that was not a fan of the Arizona senator in "any way, shape or form," in part because of his support for the invasion of Iraq. Still, he said, his animosity toward McCain did not mean he would ever ask the Navy to move a ship.

"Now, somebody did it, because they thought I didn't like him. OK? And they were well meaning, I will say," Trump said. "I didn't know anything about that. I would never have done that."

The Department of Defense also rejected parts of the Journal's report.

Acting Secretary of Defense Patrick Shanahan "was not aware of the directive to move the USS John S McCain nor was he aware of the concern precipitating the directive," according to his spokesman, Joe Buccino.

The president has continued to bash the late McCain, his longtime political antagonist, in the months after his passing in August 2018, suggesting he cannot resist reviving old political battles. Trump infamously said the former prisoner of war was not a war hero, because he had been captured during Vietnam. Trump, for his part, received a note from his doctor citing the presence of bone spurs in his heels as a reason for medical deferment, the legitimacy of which has been questioned.