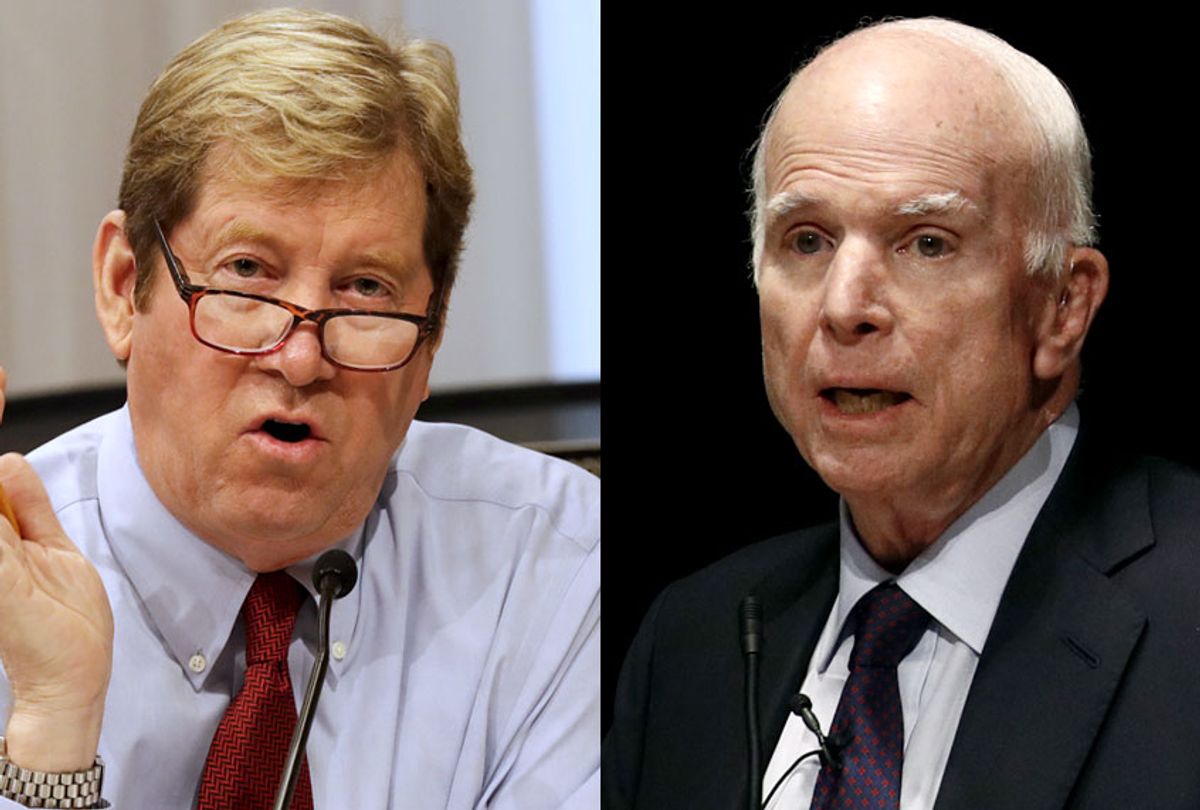 An outgoing Republican lawmaker blamed late Senator John McCain, R-Ariz., for the Republican Party's loss of a majority in the House of Representatives in last week's midterm election.

Rep. Jason Lewis, a first-term incumbent who once complained that he could no longer call women "sluts" and was unseated last Tuesday by Democrat Angie Craig, a queer Minnesota businesswoman. In a Veterans Day op-ed in The Wall Street Journal, Lewis points to McCain's now-famous late-night thumbs down vote against legislation to repeal and replace the Affordable Care Act as the catalyst to a wave of Democratic victories on Election Day. Lewis argues that McCain's pivotal "no" vote against a so-called "skinny" repeal measure of the Affordable Care Act "promoted a 'green wave' of liberal special-interest money" that he said allowed Democrats to pummel Republicans on their positions on pre-existing conditions.

The healthcare law has been under attack by Republicans since it was enacted by President Barack Obama in March 2010. The calls to repeal the ACA grew louder last year, however, when Trump entered the Oval Office and the Republican Party finally controlled both the White House and Congress.

The GOP came closest to making their goal a reality in July 2017 — two months after the House had passed repeal legislation — until McCain, along with Sens. Lisa Murkowski, R-Alaska, and Susan Collins, R-Maine, voted against the measure, halting their party's most promising effort to overturn the bill from becoming law.

Although McCain was one of three Republican lawmakers to vote against the "skinny" repeal, Lewis singled out McCain for his "no" vote, which came after he criticized Republicans for trying to push a repeal bill in a rushed and secretive process.

"The late Arizona senator's grievance with all things Trump was well known, but this obsession on the part of 'Never Trump' Republicans has to end," Lewis wrote. "Disapprove of the president's style if you like, but don't sacrifice sound policy to pettiness."

McCain's decision earned him regular — and biting — criticism from the president and some Republican lawmakers, including Lewis, who suggested that McCain's goal was only to undermine Trump, rather than stop the repeal of the bill, which is often referred to as Obamacare.

Lewis also argued in his op-ed that the failed Senate vote to repeal Obamacare allowed Democrats to campaign against Republicans with the claim that the GOP wanted to gut protections for those with pre-existing conditions — a central theme of many Democratic campaigns leading up to the midterm elections. He wrote the House bill would have "[alleviated] the pre-existing condition problem," instead of eliminating protections altogether, as he accused Democrats of wrongly claiming. Politifact has rated claims that Republicans' defense that the House bill wouldn't deny coverage for those with pre-existing conditions as "mostly false."

The Senate is a different place now: McCain has since passed away, a different Republican has taken his seat and, while last week's midterm elections didn't result in a major Senate leadership shakeup, Republicans increased their slight majority in the upper chamber — and Republicans could take another swing at eliminating the Affordable Care Act. Vice President Mike Pence and Senate Republican Leader Mitch McConnell, R-Ky., have previously indicated that they would like Republicans to take another stab at repealing and replacing Obamacare should Republicans prevail in the midterm elections.

While the future of the Affordable Care Act remains uncertain, one thing is clear: Health care was a top issue for voters across the country as they cast their ballots on issues such as Medicaid expansion and the lawmakers vying to represent them at the federal, state and local level on November 6. Three traditionally conservative states passed ballot initiatives to adopt the Affordable Care Act's expansion of the Medicaid program — Idaho, Nebraska and Utah. Additionally, as Democrats seized control of the House of Representatives on Election Day, it will be even more difficult for Republicans to dismantle and rewrite Obamacare.