After Virginia Beach, NRA rushes to tell the world silencers are safe — because its only goal is to boost sales 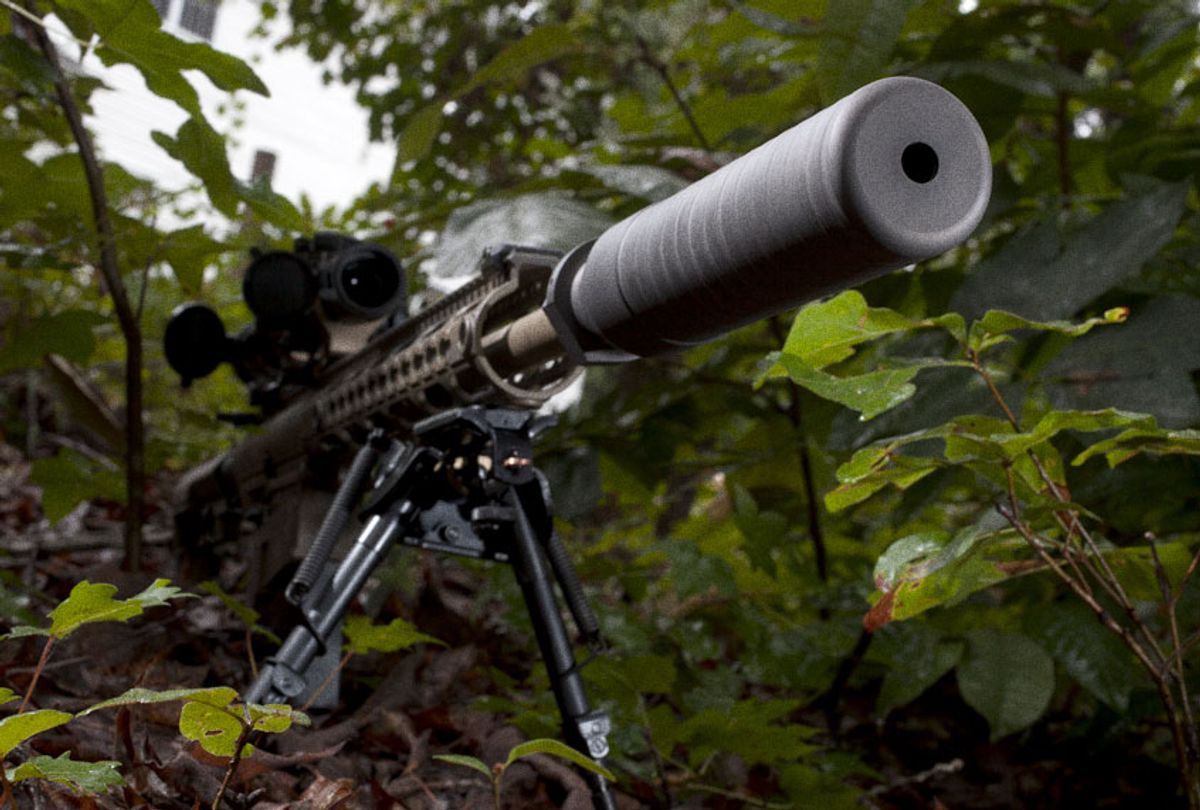 Friday's mass shooting in Virginia Beach, in which 12 victims and the shooter were killed, will likely join the drumbeat of mass murder stories that have become so common they barely register as news anymore. The apparent shooter, a 40-year-old man named DeWayne Craddock, resigned his job early Friday and then showed up at his office, apparently intent on killing as many people as possible before the police, after a protracted gun battle, killed him as well.

But this shooting has one detail that sets it apart from the numbing litany of mass shootings: Craddock had a silencer on his weapon, that device we've all seen on TV that the gun lobby insists on calling a "suppressor."

"He obviously knew what he was doing when he had extended magazines, he had suppressors. He was coming to kill as many people as possible, which is chilling," Shannon Watts of Moms Demand Action told Salon.

Craddock likely jumped through the numerous hoops created by the 1934 National Firearms Act, and his use of a silencer makes it quite clear he thought it would make it easier to kill more people. But gun industry shills are now fanning out across the media, denying to every journalist they can pin down that the silencer made any difference. That claim is hard to square with the reports from shooting witnesses, however, many of whom seemed confused about what was happening or how close it was. One person reportedly mistook the sound for a nail gun. It's also hard to square with the fact that the shooter clearly believed that a silencer would give him an advantaged in terms of piling up the body count.

Silencers don't work like they do in the "John Wick" movies; they can't completely muffle a firearm's loud, percussive report. Instead, they work by muffling and distorting the sound, making it softer and more diffuse. As gun safety advocates point out, that is enough to make silencers a danger, especially in a chaotic mass shooting such as this one.

"Bystanders can run from the gunfire only if they know where it is coming from," Juliette Kayyem, a former assistant secretary of homeland security, explained in a Washington Post op-ed after the shooting. Silencers, by design, make it much harder to identify where shots are coming from, making it harder for victims to escape and for police to find an active shooter.

Craddock likely purchased his silencer legally at one of the Virginia gun stores that sell the devices, but the heavy federal regulation of silencers has been successful in suppressing the popularity of this particular accessory. But the NRA, whose primary purpose is to boost sales for gun manufacturers, has been trying to change this, lobbying Congress and rolling out major marketing initiatives in hopes of gutting the 1934 law.

The gun industry's big talking point on "suppressors" is to highlight the fact that they don't entirely silence the firearm report, so those who oppose their sales are a pack of hysterical ninnies trying to scare people unfairly. There are endless FAQ sheets and other talking point dissemination pages from the NRA that argue that "suppressors reduce noise, but do not completely eliminate it" and claim that their primary or sole purpose is to prevent hearing loss and keep shooters from annoying neighbors.

"Suppressors are about keeping people safe from hearing loss," NRA TV host Grant Stinchfield declared on Twitter in 2018, arguing "that a 'suppressor' is anything but quiet."

When the topic is silencer sales, Stinchfield is quick to deny that murder is made easier by suppressing the sound of a gunshot. But he sang a much different tune last year, when a disgruntled video gamer murdered two people at a Florida tournament  that was being live-streamed on Twitch. Stinchfield blamed one of the victims, pointing out that 22-year-old Eli Clayton was wearing headphones when he was murdered.

"If you listen over the talking that person doesn’t hear the shots. Why? Because their headphones are on," Stinchfield said of the video of Clayton's murder. "I heard at least four or five or six shots while that person was taking a cellphone video of the game. There’s no running for cover, there’s not even any looking around."

So, according to the NRA, sound suppression in a situation where people have no reasonable expectation that someone will start shooting at them is too deadly a risk. But applying a sound-suppression device directly to the firearm is somehow not unsafe at all. This defies common sense. The same technology that the NRA lauds for silencing guns enough to keep one's neighbors from hearing them will also silence guns enough that people locked in large buildings with active shooters won't be able to figure out what's going on.

Watts disputed the claim that silencers are necessary to protect from hearing loss, pointing out that "the military uses ear protection, not silencers, to protect soldiers' hearing."

What the military does use silencers for, however, is stealth. When SEAL Team Six raided Osama bin Laden's compound in 2011, its members customize their firearms with silencers as part of the larger mission to make the team's "operations faster, quieter and deadlier," as reported by the New York Times.

Watts is skeptical that the NRA is really interested in protecting people's hearing. She said she sees another motive in the NRA's push to demolish the 85-year-old law that regulates silencer sales: Money, baby.

"After they invested $30 million in Donald Trump's campaign," Watts explained, the NRA pushed hard for legislation "to deregulate silencers because it would be a cash cow for gun manufacturers."

This was an especially high priority since gun sales were expected to go down after a Trump victory, since a primary marketing strategy of the gun industry is to exploit conservative insecurity and anxiety whenever Democrats are in power. Sure enough, there has been a "Trump slump" in gun sales. So the hope here is that by deregulating silencers, the industry can boost profits by selling more of them. Donald Trump Jr. even recorded a lengthy infomercial with the CEO of SilencerCo, in which  he said that silencers were great for getting "little kids into the game."

Fortunately for our national sanity, the NRA is now embroiled in an internal civil war, driven by the very same unchecked greed that leads the group to endanger American lives for profit. Leaders across the group have been suing each other, exposing the stunning levels of grift within the organization, including setting up for-profit consulting groups to siphon money out of NRA coffers and lavish expense-account spending usage, including CEO Wayne LaPierre's $300,000 on clothes from Ermenegildo Zegna alone.

Plus, the group's investment in Trump backfired on Sunday (pun intended), when the president's impulsive nature once again drove him off-message, at least from the perspective of his gun industry benefactors. When a reporter asked, "Do you believe that silencers should be restricted?" Trump responded, "I don’t like them at all."

It's especially helpful that Republicans failed to repeal silencer regulations before Democrats took the majority in the House last fall. History shows that mass shooters are a valuable marketing asset for the gun industry, as their high kill rate functions as gruesome real-life advertising for the guns and accessories they use.  Both the AR-15 assault rifle and  bump stocks have seen massive sales surges after their use in mass shootings.

Regulations on silencers, however, require purchasers to register through a relatively onerous and time-consuming process. The gun industry can't exploit the impulsiveness that drives post-shooting shopping sprees, which is probably why it has pushed so hard to get those regulations undone.

After the Virginia Beach shooting, the discussion regarding silencers will likely be dominated by impossible-to-settle debates about how much impact the silencer had on this particular day of carnage. Those debates distract from the much larger issue, which is that the NRA and the gun industry it supports don't really care about any such questions as long as they're making money. It's high time that people whose only interest is profit, not in saving lives, should be denied any voice in determining how guns are regulated.