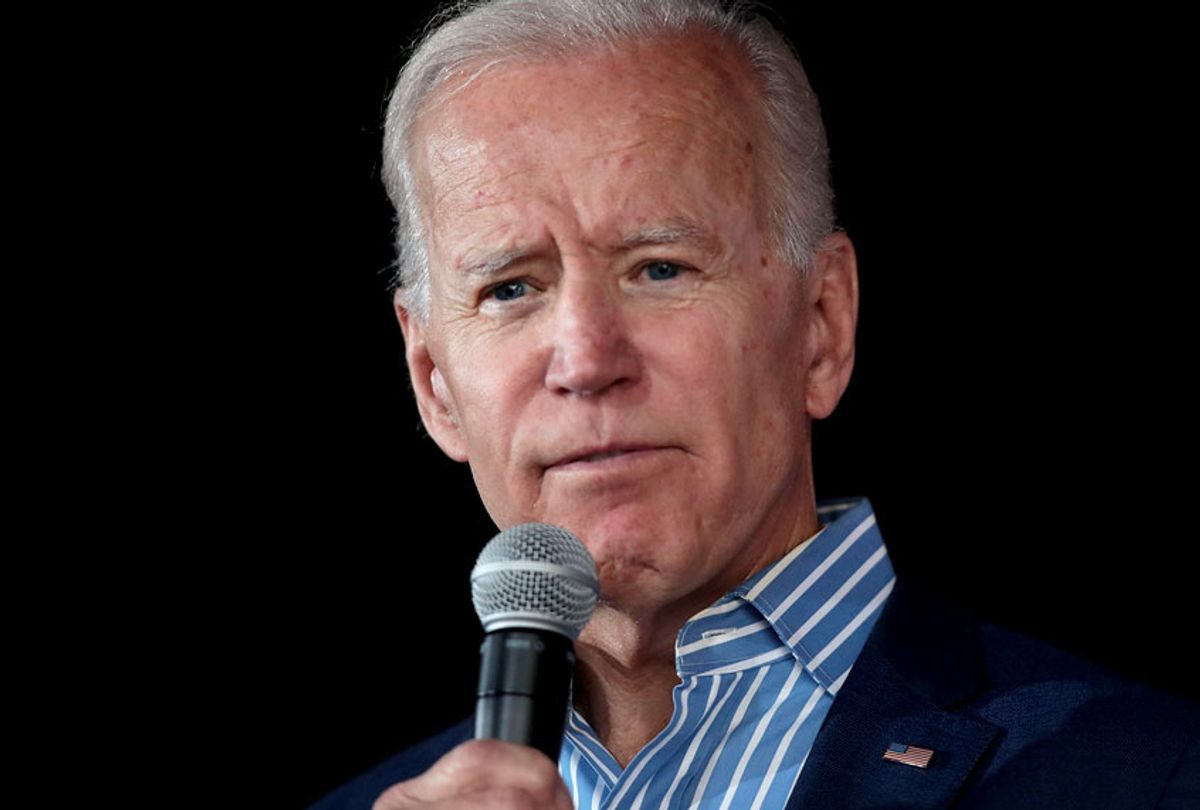 The criticism came in response to an NBC News report published Wednesday that revealed Biden continues to support the amendment, which allows for exceptions only in cases of rape, incest or when a pregnant person's life is at serious risk.

Biden, who holds a commanding lead over the 2020 Democratic presidential field in early polls, would support repealing the amendment "if abortion avenues currently protected under Roe were threatened," his campaign told NBC News, referring to the 1973 Supreme Court decision establishing a constitutional right to abortion. (Biden told an American Civil Liberties Union volunteer last month that he would abolish the amendment.)

The Hyde Amendment was first passed in 1976, three years after the Supreme Court ruled that the right to abortion is protected under the U.S. Constitution in Roe. A few years later, Congress made an exemption for cases in which continuing the pregnancy will endanger a patient's life. An exemption for cases of rape or incest was added in 1993. (As a senator in the 1970s and '80s, Biden opposed efforts to add the rape and incest exceptions, according to NBC News.)

Reproductive rights advocates have argued the law disproportionately affects women of color and poor women seeking abortions because it prevents government health programs, such as Medicaid, from paying for abortions in most circumstances.

The measure was introduced by Rep. Henry Hyde in 1976, who said at the time, "I certainly would like to prevent, if I could legally, anybody having an abortion, a rich woman, a middle-class woman, or a poor woman. Unfortunately, the only vehicle available is the ... Medicaid bill."

In a statement Wednesday, Ilyse Hogue, president of the reproductive rights organization NARAL, said there is "no political or ideological excuse" for Biden's continued support for the Hyde Amendment, which she claimed "translates into discrimination against poor women and women of color, plain and simple."

"His position further endangers women and families already facing enormous hurdles and creates two classes of rights for people in this country, which is inherently undemocratic," Hogue said.

Stephanie Schriock, the president of Emily's List, a political action committee that aims to elect pro-choice Democratic women to office, also issued a statement calling it "unacceptable" for a major Democratic presidential contender to support the Hyde Amendment.

"We hope that Vice President Biden will reconsider this position and what it means to millions of women," Schriock said, emphasizing that the amendment "effectively bans abortion for women on Medicaid."

Biden's reiterated support for the measure marks a sharp split from most of his 2020 competitors, as well as with the Democratic Party's platform. 2016 marked the first year in which the party amended its presidential platform to explicitly call to repeal the Hyde Amendment, describing it as among the "federal and state laws and policies that impede a woman's access to abortion."

"The Democratic Party platform is crystal clear in supporting the right to safe, legal abortion and repealing the Hyde Amendment, a position held by the majority of voters," Kelley Robinson, executive director of the Planned Parenthood Action Fund, said in a statement Wednesday in response to Biden's position. "Supporting Hyde isn't good policy or politics."

The news of Biden's support for the Hyde Amendment prompted several 2020 Democratic presidential candidates to quickly weigh in — and attempt to distance themselves from the former vice president on the issue.

"There is #NoMiddleGround on women's rights," Sen. Bernie Sanders, I-Vt., Biden's next-closest rival, tweeted Wednesday. "Abortion is a constitutional right. Under my Medicare-for-all plan, we will repeal the Hyde Amendment."

Former Rep. Beto O'Rourke, D-Texas, shared a video of himself calling to abolish the measure.

"No matter your income or where you live, every woman should have access to health care, including abortion," he said.

Other frontrunners like Sens. Kamala Harris of California, Kirsten Gillibrand of New York, Amy Klobuchar of Minnesota and Elizabeth Warren of Massachusetts have all co-sponsored legislation to overturn the amendment.

NARAL's Ilyse Hogue pointed out in her statement that Biden appears to be the only Democratic presidential hopeful who has come out in support of the 1976 law this election cycle.

"At a time where the fundamental freedoms enshrined in Roe are under attack, the 2020 Democratic field has coalesced around the Party’s core values — support for abortion rights, and the basic truth that reproductive freedom is fundamental to the pursuit of equality and economic security in this country," she said. "Differentiating himself from the field this way will not earn Joe Biden any political points and will bring harm to women who are already most vulnerable."

The news of Biden's support of the Hyde Amendment comes after a host of states, including Alabama, Georgia, Ohio, Kentucky, Mississippi and Missouri, recently passed laws that restrict access to abortion. Lawmakers have said they hope the bills, along with similar proposals currently under consideration in more than a dozen other states, will incite a blockbuster Supreme Court showdown over Roe.

"As abortion access is being restricted and pushed out of reach in states around the country, it is unacceptable for a candidate to support policies that further restrict abortion," Kelley Robinson, executive director of the Planned Parenthood Action Fund, said in a statement.