Fox News judge: "There is ample evidence to have indicted President Donald Trump for obstruction" 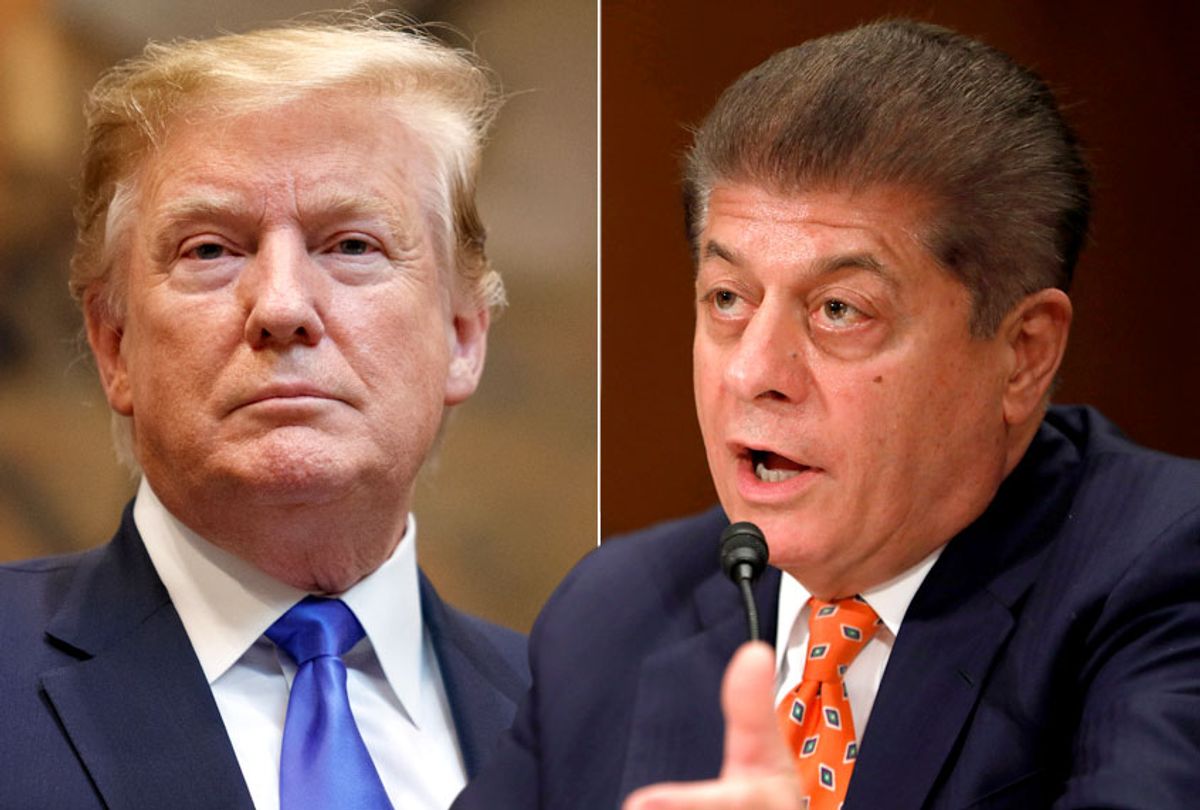 In a new editorial for Fox News, Judge Andrew Napolitano writes that "there is ample evidence to have indicted President Donald Trump for obstruction of justice."

In his writing, the Fox News legal analyst examines the long-term ramifications of former special counsel Robert Mueller's only public remarks. After describing how Mueller presented his finding "in such a manner as to gin up House Democrats," Napolitano argued that Americans needed to better understand the broader context behind the former special counsel's remarks before passing judgment on it.

"We learned from Mueller's report to Barr that while there is evidence of members of the Trump campaign collaborating with the Russians, there is not enough evidence to establish a conspiracy," Napolitano wrote. "We also learned that Trump personally engaged in 10 or 11 — depending on how you count them — efforts to interfere with Mueller's investigation. Each of these attempts at interference constitutes the crime of obstruction of justice. That crime consists of any material attempt — whether successful or not — to impede a federal investigation for a corrupt purpose. So, a lawyer who files motions asking a judge to restrain FBI agents from violating the lawyer's client's constitutional rights is interfering with a federal investigation, but for a lawful — not a corrupt — purpose."

Napolitano also argued that Trump could be considered a potential target for impeachment based not only on those alleged efforts to obstruct justice but also on precedent.

"We know that presidential obstruction of justice is an impeachable offense, because both President Richard Nixon and President Bill Clinton — each of whom instructed aides to lie to FBI agents and falsify evidence — were charged with it," Napolitano wrote. "The charges came in articles of impeachment. In these cases, either the House of Representatives or its Judiciary Committee found that the appropriate constitutional language that forms the basis for impeachment — 'high crimes and misdemeanors' — includes obstruction of justice."

After reiterating his opinion that there was no doubt that Trump obstructed justice, Napolitano described Mueller's report as "unambiguous evidence of Trump's obstruction." He argued that Mueller refused to take a position on whether the Department of Justice can indict a sitting president but instead left that choice to Attorney General William Barr. The problem, Napolitano argued, is that "he did that knowing well that the attorney general — who had just been appointed to his job by Trump — was on record as having argued that a sitting president should not be charged with crimes."

Napolitano also took issue with Mueller's claim that he was deferring to a Department of Justice legal memorandum from October 2000.

"I have argued in this column and elsewhere that Mueller's deference to the 2000 DOJ opinion is misplaced," Napolitano wrote. "We know that, because two months after it was promulgated, federal prosecutors threatened to indict incumbent President Clinton for obstruction of justice on the day after he left office. Clinton chose to address the threat while still in office and directed his lawyers to engage in plea negotiations with prosecutors. They negotiated a plea deal, in which he pleaded guilty before a federal judge Clinton had appointed to the bench. The plea was to ethical violations, in which he admitted that he lied to the court."

He concluded, "Question: What do you call a threat by federal prosecutors to seek an indictment of the president and subsequent plea negotiations? Answer: A prosecution of the president."

However, Napolitano also acknowledged that impeachment may not currently be possible, because there is not "broad public sentiment" behind such an action.

This is not the first time Napolitano has expressed scathing opinions about Trump. Last month, he told Fox Business Network that "effectively, what Bob Mueller said is: 'We had evidence that [Trump] committed a crime, but we couldn't charge him because he's the president of the United States.' That opens the door for the Democrats to pounce."

In April, after the release of Mueller's report, he wrote in an editorial saying, "When former FBI Director James Comey informed [special counsel Robert] Mueller that he believed Trump fired him because he had declined Trump's order to shut down the investigation of Trump's campaign and of his former national security advisor, retired Lt. Gen. Michael Flynn, Mueller began to investigate whether the president had unlawfully attempted to obstruct those investigations."