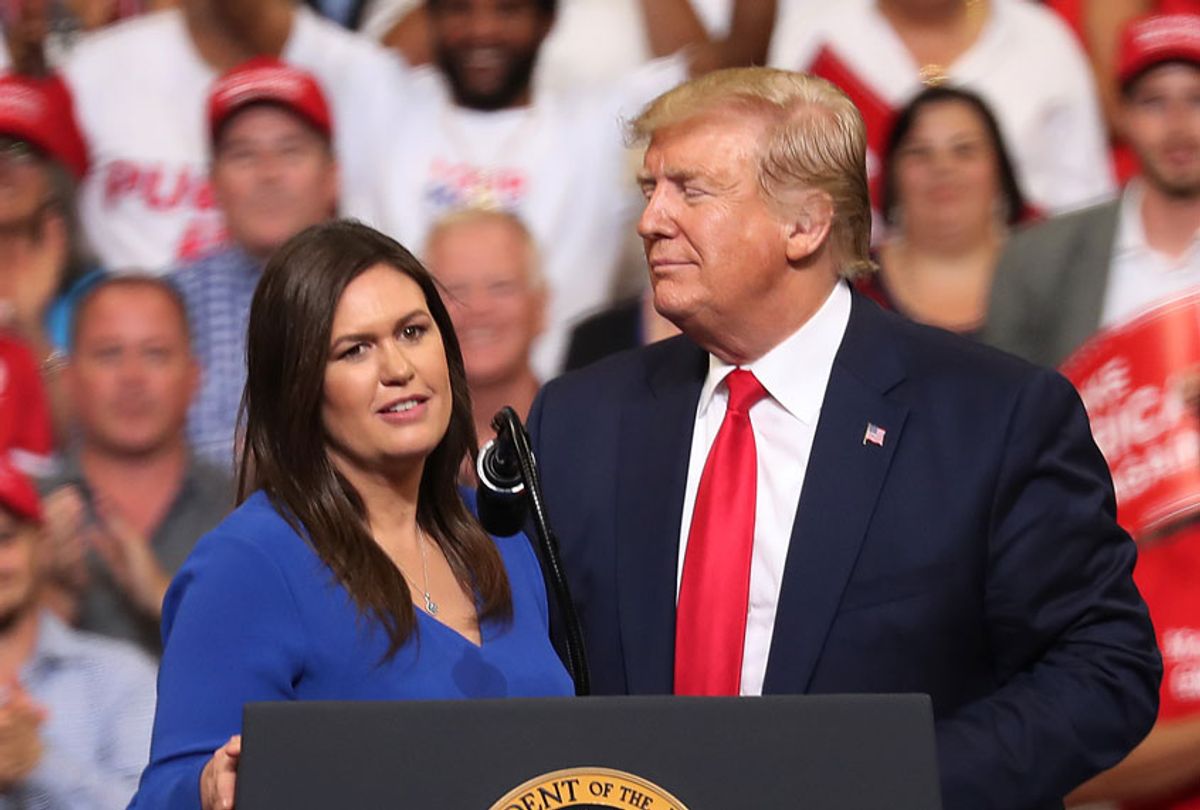 President Donald Trump touted Sarah Huckabee Sanders, his outgoing press secretary, as a potential candidate for governor of Arkansas as he kicked off his own 2020 re-election campaign.

"By the way, a woman who has been so good, so talented, so wonderful and we’re sort of going to be losing, I have a feeling she’s going to be running for a certain gubernatorial position," Trump told an enthusiastic crowd as he prepared to call for Sanders to take the stage.

He added, "But a woman who’s a special woman ⁠— and her father, by the way, he’s out there fighting for us all the time ⁠— Sarah Huckabee Sanders."

When Sanders took the stage, she described working for Trump as the "honor of a lifetime." The press secretary expressed her gratitude to the president for the opportunity to sit at the "front row of history and watch you drastically change our country for the better." She predicted that Trump would win a second term, telling a cheering audience that "he made America great again and continues to make America great. He’s going to have an incredible six more years."

Trump first announced that Sanders was stepping down last week in a pair of tweets , which suggested she was leaving the White House in a rare position: on good terms with the president.

"After 3 1/2 years, our wonderful Sarah Huckabee Sanders will be leaving the White House at the end of the month and going home to the Great State of Arkansas...." Trump posted in his first tweet.

He continued, "....She is a very special person with extraordinary talents, who has done an incredible job! I hope she decides to run for Governor of Arkansas - she would be fantastic. Sarah, thank you for a job well done!"

After replacing Sean Spicer ⁠— whose reputation never fully recovered after falsely claiming on Day One of the administration that Trump's inaugural crowd "was the largest audience to ever witness an inauguration" ⁠— Sanders quickly developed a reputation as a staunch defender of the president. Journalists and critics have accused her of knowingly lying in order to promote the president's agenda — "There's no question that she spread lies at this point," "New Day" co-host John Berman once said on CNN — while Sanders has claimed that the media has covered the president in an unfair manner.

However, as my colleague Sophia Tesfaye wrote of one revelation from the Mueller report, "When Sanders faced the press at two different press conferences in May of 2017 to explain Trump’s firing of James Comey as FBI director, she told bald-faced lies." She elaborated in an article titled, "After Mueller, WHite House press secretary is toast":

But Sanders knows as well as anyone that she will never face consequences for anything she's ever done — or will ever do. If Trump can fire Comey on TV and beg Russia for assistance against his political opponent, his press secretary's falsehoods won't cause much of a fuss. Remember when Sanders disseminated a doctored video from an alt-right website in order to accuse CNN's Jim Acosta of physically assaulting a White House press intern? Yeah, that got lost in the avalanche of controversy and scandal that suffocates political journalists on a near-daily basis. Sanders kept her job.
Of course, an honest person cannot be Trump's press secretary, because it's not possible to speak for Trump to the press without lying. If Mueller’s two-year investigation has found anything, it is that there is no shred of accountability anywhere around the man who purportedly leads our nation.

In a press conference in December 2017, Sanders, for her part, claimed that "there's a very big difference between making honest mistakes and purposefully misleading the American people ⁠— something that happens regularly."
She added, "You can't say that it's an honest mistake when you're purposefully putting out information that you know to be false, or when you're taking information that hasn't been validated, that hasn't been offered any credibility and that has been continually denied by a number of people, including people with direct knowledge of an instance."
You can watch Trump's rally here: