"There's three women up here that have fought pretty hard for a woman's right to choose," Klobuchar reminded Inslee 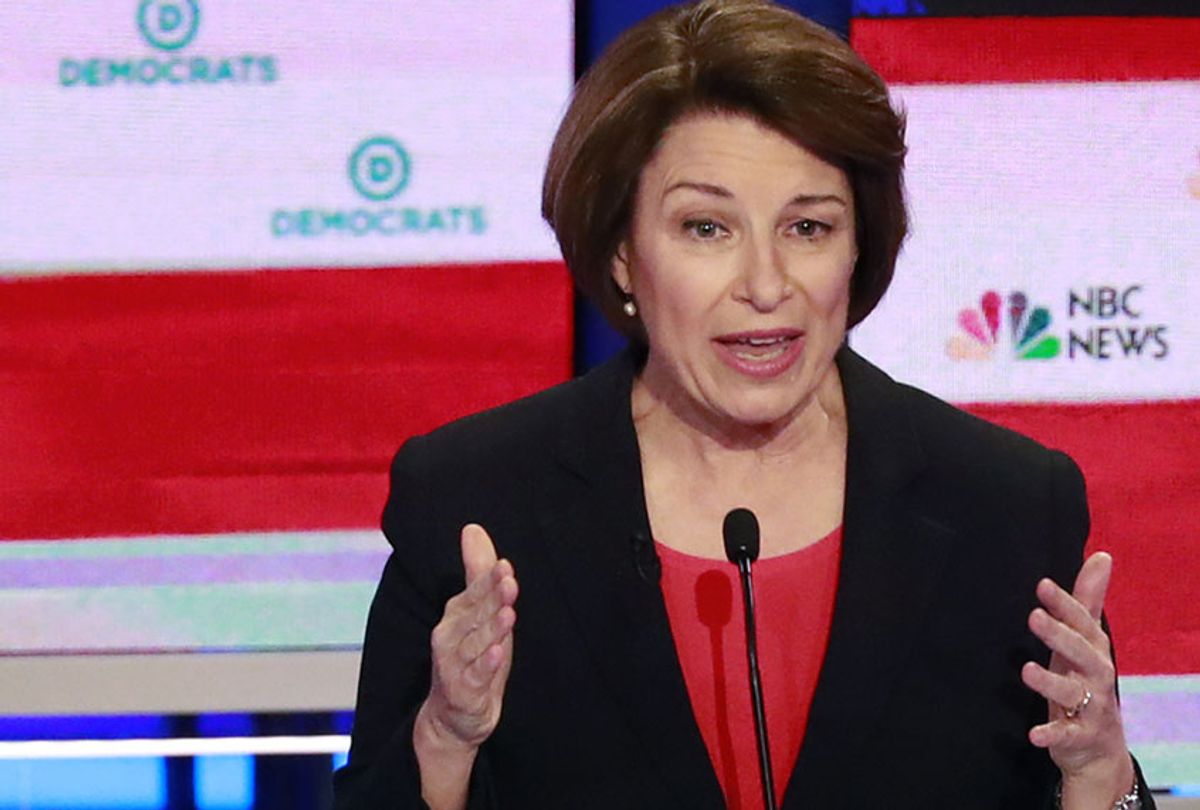 Sen. Amy Klobuchar took aim at Washington Gov. Jay Inslee at the first Democratic primary debate on Wednesday after he claimed he was the "only" candidate on stage "who has passed a law protecting a woman's right of reproductive health and health insurance," prompting a laugh from the Minnesota Democrat.

Klobuchar immediately pushed back against Inslee's assertion to remind the governor that there were multiple women on stage who have long fought for reproductive healthcare.

"I just want to say, there's three women up here that have fought pretty hard for a woman's right to choose. So I'll start with that," Klobuchar said, prompting loud cheers from the audience. (In addition to herself, Klobuchar was also referring to Sen. Elizabeth Warren of Massachusetts and Rep. Tulsi Gabbard of Hawaii.)

Julián Castro, the former secretary of Housing and Urban Development under President Barack Obama and the former mayor of San Antonio, also drew applause when he followed up and said he supports not just "reproductive freedom" but also reproductive justice" for all women, including members of the LGBTQ community, regardless of income.

"More than that, everybody in this crowd and watching at home knows that in our country today, a person's right to choose is under assault in places like Missouri, in Alabama, in Georgia," Castro said, referring to the recent wave of restrictive abortion laws which have been adopted by several states nationwide.

"I would appoint judges to the federal bench that understand the precedent of Roe v. Wade and will respect it," he added.

The debate over reproductive rights and access to abortion has exploded in recent months as multiple states have enacted restrictive laws and so-called "heartbeat" bills in an effort to incite a blockbuster Supreme Court showdown over Roe v. Wade, the 1973 ruling that legalized abortion nationwide.

Alabama passed a near-total ban on abortions last month, making it a felony in the state for a doctor to perform an abortion at any time absent a medical emergency. Missouri also passed a law that bans abortions after eight weeks, even in cases of rape, incest or human trafficking.

States including Georgia, Kentucky, Louisiana, Ohio and Mississippi have passed so-called "heartbeat" bills outlawing abortions once a fetal heartbeat can be detected, which can be as early as six weeks and before many women know they are pregnant. Utah and Arkansas also voted to ban the procedure after the second trimester.

The bills, along with similar proposals currently under consideration in more than a dozen other states, are the latest effort by conservatives to challenge Roe. They have moved through states across the nation at a time when opponents of legal access to abortion nationwide have been emboldened by the transformation of the Supreme Court with the confirmation of Justice Brett Kavanaugh, which secured a conservative majority on the nation's highest court for decades to come.

Opponents of the legislation have vowed to sue to block the measure if it becomes law. They intend to argue that a state cannot restrict access to abortion before viability — the point at which a fetus can survive outside the uterus — which is a right that federal courts have repeatedly reaffirmed in decisions since Roe. Any restriction on abortion must contain exceptions to protect the life and health of the woman and cannot create an "undue burden" on a woman seeking an abortion — a standard that was established in Planned Parenthood v. Casey in 1992 and clarified in Whole Woman's Health v. Hellerstedt in 2016.

"Politicians have absolutely no place in our personal health decisions. Now more than ever, we must unite against this unprecedented attack on our fundamental rights and freedoms. It is time for women, men, and all people to declare that reproductive health care is health care and health care is a human right," Planned Parenthood President Dr. Leana Wen said in a statement. "We will stand together to defend our right to safe, legal abortion. Because we are in the fight of our lives."

The abortion bans have drawn widespread criticism from Democratic lawmakers, including from presidential hopefuls like Klobuchar, Warren and Sen. Cory Booker of New Jersey.