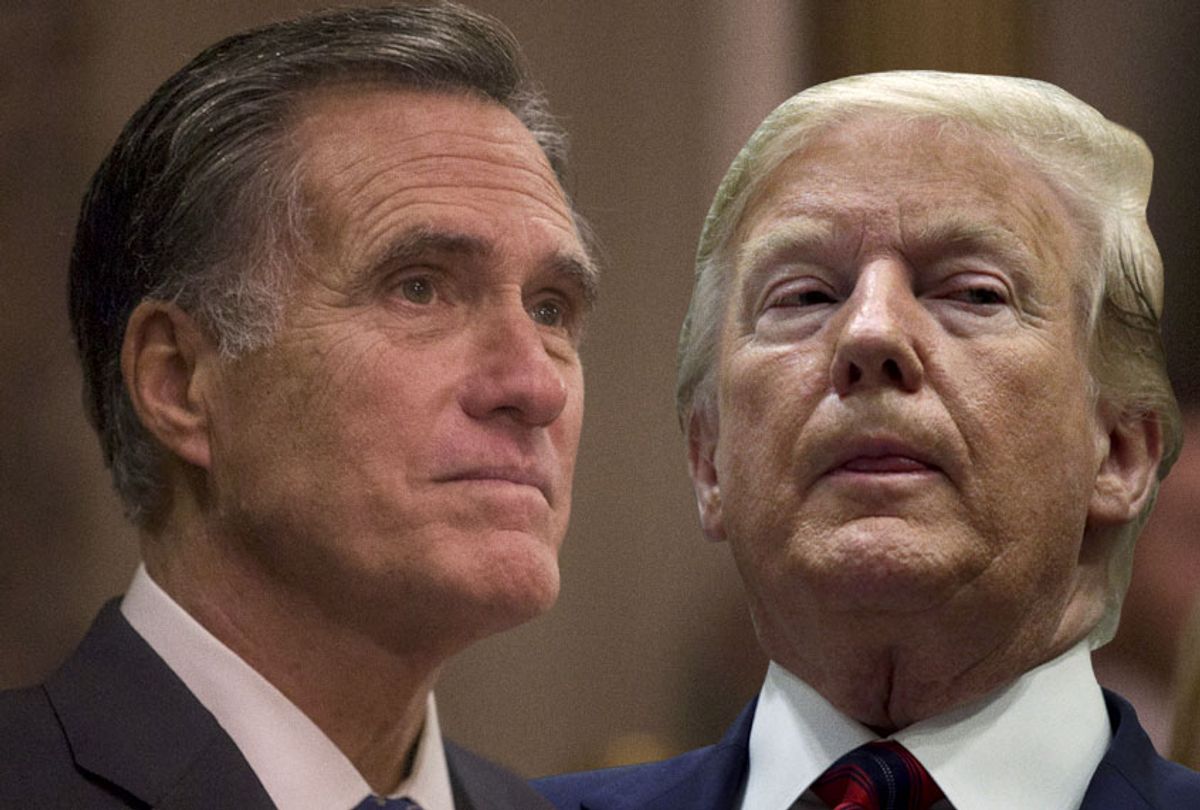 Sen. Mitt Romney, R-Utah, dodged questions Monday about whether President Donald Trump'a tweets were racist after the commander-in-chief doubled down on urging four progressive freshmen congresswomen of color should "go back" to their so-called countries of origin.

"A lot of people have been using the word," Romney said when asked if the tweet was racist. "My own view is: That what was said and what was tweeted was destructive, was demeaning, was disunifying and frankly was very wrong."

After agreeing with fellow Republican Sen. Susan Collins, R-Maine, that Trump should withdraw the tweet — and at the same time acknowledging the president had suggested he would not do so — Romney said Trump's rhetoric was "clearly destructive, and it has the potential to being dangerous, as well."

"To suggest to people who are American citizens that they should go home or they should, 'Go back where they came from' is simply over the line," he added. "It's wrong. It's destructive to the American spirit."

Later, when Alison King of an NBC affiliate in Boston asked Romney about whether Trump's comments were racist, the Utah senator excused himself and walked away.

Not every Republican senator was as reluctant to stand up to Trump as Romney, who has in the past been an outspoken critic of the president. Sen. Pat Toomey of Pennsylvania said that "three of the four were born in America, and the citizenship of all four is as valid as mine."

"I couldn’t disagree more with these congresswomen’s views on immigration, socialism, national security and virtually every policy issue," Toomey continued. "But they are entitled to their opinions, however misguided they may be. We should defeat their ideas on the merits — not on the basis of their ancestry."

Originally posted by Trump on Sunday, the tweets in question seemingly referenced the so-called "squad" of Democratic congresswomen that includes Reps. Alexandria Ocasio-Cortez of New York, Ayanna Pressley of Massachusetts, Rashida Tlaib of Michigan and Ilhan Omar of Minnesota.

"So interesting to see 'Progressive' Democrat Congresswomen, who originally came from countries whose governments are a complete and total catastrophe, the worst, most corrupt and inept anywhere in the world (if they even have a functioning government at all), now loudly and viciously telling the people of the United States, the greatest and most powerful Nation on earth, how our government is to be run," Trump tweeted. "Why don’t they go back and help fix the totally broken and crime infested places from which they came. Then come back and show us how it is done. These places need your help badly, you can’t leave fast enough. I’m sure that Nancy Pelosi would be very happy to quickly work out free travel arrangements!"

While Trump's reference to Pelosi referenced a public feud between the House speaker and "the squad," the California congresswoman stood up for her peers.

"When @realDonaldTrump tells four American Congresswomen to go back to their countries, he reaffirms his plan to 'Make America Great Again' has always been about making America white again," she tweeted. "Our diversity is our strength and our unity is our power."

You can read a transcript of Romney's conversation with Everett and Thorp here: