Smart Watch: 12 new TV shows to watch for this fall

We can't guarantee these will be hits, but for various reasons you may want to keep an eye out for these premieres 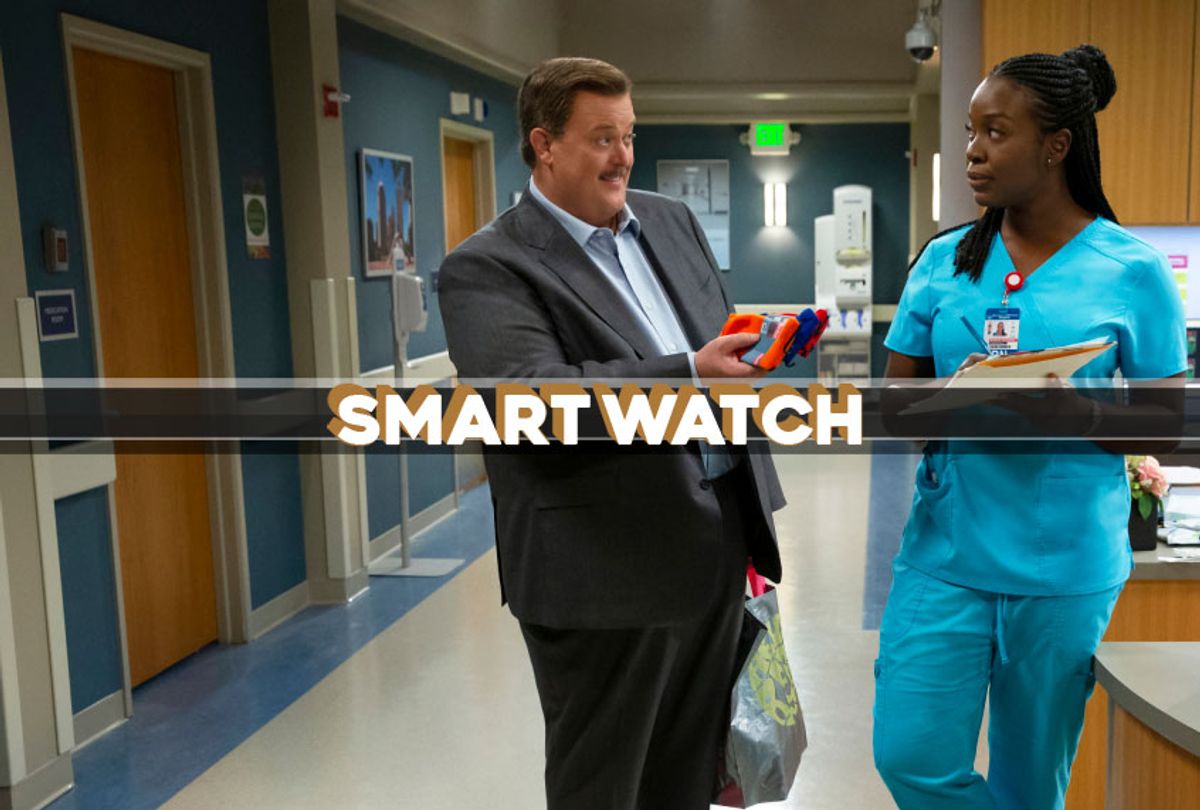 The fall schedule is full of the usual suspects: returning favorites we’ve been primed anticipate, along with a few would be blockbusters debuting for the first time. Those are already being promoted to death; honestly, do you need another teaser to pique your interest in HBO’s “The Watchmen”? Probably not. Ditto for the channel’s adaptation of Philip Pullman’s “His Dark Materials” — also highly anticipated, also in the autumn hopper.

But there many other shows critics glimpsed at the recently ended Television Critics Association’s Summer Press Tour in Los Angeles. We didn’t see all of them — as is generally the case in 2019, there’s simply too much new television to have previewed every new fall premiere during the Tour’s 18-day run.

But here are 12 titles that hold some promise — or at the very least should give people something new to discuss (or gripe about) while we figure out which shows will be dominating the conversation over the next decade or so . . . if that’s even possible anymore.

Until then, take a look:

No matter whether this new comedy from “The Big Bang Theory” creator Chuck Lorre is a hit or a flop, it’s undeniable that his heart is in the right place in conceiving of it. In this odd pairing Bob (Billy Gardell), a middle-aged compression sock salesman, become smitten with Abishola (Folake Olowofoyeku), the cardiac nurse who cares for him as he recovers from a heart attack.

When Lorre spoke with critics, he stressed that the series’ focus is much more on Abishola’s experience as a Nigerian immigrant than Bob’s Wonder Bread white guy existence, which basically makes Gardell a means of luring Middle America into a story about an African family and the struggles they endure in their pursuit of the American dream.

Buying Lorre a bit more rope is his intentional hiring of comedian Gina Yashere as a producer. Yashere’s personable wit and experience as a British born child of Nigerian parents are both valuable assets sure to lend some genuine smarts and cultural accuracy to the writing.

“Black-ish” creator Kenya Barris builds another addition onto the Johnson family’s extended story with this new spinoff, this time exploring the ’80s-era upbringing of Rainbow Johnson (Tracee Ellis Ross). “Black-ish” viewers know that Bow grew up in a mixed-race family. The untold part of her story is that she started life on a commune and ended up in the suburbs, thrusting Bow and her siblings out of their sheltered existence and into a world that doesn’t consider them to be fully black or white.

“There’s been a lot of dialogue and a lot of episodes and conversations around the fact that Bow is [biracial], limited to jokes being thrown at her about being mixed,” said Ross, who is an executive producer on the series, during ABC’s appearance at the TCA tour.  “I think this is an opportunity for us to unpack that in a much larger way that I’m thrilled to be able to do.” Mark-Paul Gosselaar and Tika Sumpter star as Bow’s parents, with Arica Himmel playing the 12-year-old version of Bow.

When Cobie Smulders turned up as an agent of S.H.I.E.L.D. and Nick Fury’s right hand in the various Marvel Cinematic Universe, audience make have woken up her true potential as an action hero. This new drama based on the graphic novel series by Greg Rucka places Smulder in her element as private eye Dex Parios, an ex-military tough and a gambler whose slugs it out with some of the toughest criminals in Portland, Oregon.

“Stumptown” looks like an odd marriage between the ABC of old (that network that loved a romantic hour-long crime caper) and the newer version that wants to maintain a theatrical edge. Co-starring are Jake Johnson, Camryn Mannheim and Michael Ealy.

To redeem himself he decides to help a group of immigrants seeking a path to citizenship by assisting them in navigating the system and, on the way, perhaps gain a greater appreciation for the ideal version of America.

The “Sunnyside” pilot has a good share of sweetness to it, but in the way of most series from Mike Schur (who serves as this one’s supervising executive producer), the most entertaining role isn’t the main star but the boisterous crew surrounding him. And Penn is encircled by an impressive ensemble that includes Diana Maria Riva, Kiran Deol, Moses Storm and Samba Schutte, and in a genius move, pairs Poppy Liu and comedian Joel Kim Booster as a pair of crazy rich Asian dipsticks whose supervillain father can buy them anything except brains.

Honestly, this sounds like a goofy undertaking for the “God Friended Me” network. But the two reasons to have faith in this series exploring the mysterious divide between skepticism and religion are Robert and Michelle King, the producers of “The Good Wife” and “The Good Fight.”

This is an atypical project for the writing duo, although they told critics they’ve been working on the story for their entire lives together. But their pairing of a skeptical psychologist (Katja Herbers) with a, ahem, hot priest-in-training (Mike Colter) works well, and the drama’s first investigation into one of the Catholic Church’s unexplained cases, which involves what seems to be a demonic possession, was downright creepy. The series also stars Aasif Mandvi, Michael Emerson and Christine Lahti.

Through an incredible cast, creators Chris Brancato and Paul Eckstein bring to life the story of legendary crime boss Bumpy Johnson (Forest Whitaker), who takes on the Genovese crime family in the early 1960s in order to regain control of the neighborhood he once lorded over. In the process of doing so, Bumpy forges an alliance with a rising religious figure known as Malcolm X (Nigél Thatch). Giancarlo Esposito also stars as Adam Clayton Powell, Jr.

“The wonderful thing about this show is that it’s about connections between people — whether you’re adversaries or whether you are brothers and sisters,” Esposito told critics. “It is about how these people navigate a very turbulent time to get what they need, not only for themselves, but come to consciousness in getting what they need for their community.”

Ordinarily the “Nature” installments that receive promotional juice involve the cuddly or majestic creatures of the Earth, but this episode is extraordinary in the way it reveals a number of fascinating traits about a creature most humans wouldn’t think to anthropomorphize beyond, say, “SpongeBob SquarePants.”

Here we meet professor David Scheel and his daughter Laurel during the months that they opened their home to an octopus named Heidi, who proved she could recognize individual faces, and even demonstrated that she liked to watch TV comedies. Her favorite show? “The Big Bang Theory,” naturally. Watching this episode may change the way you think about these sea creatures. It may even stop a few people from thinking of them as food.

To give you an idea of this writing’s flavor, this new take on one of teen literature’s cleanest goody-two-shoes detectives is another fine production from “Gossip Girl” and “The O.C.” creator Josh Schwartz and his producing partner Stephanie Savage.

And much in the way “Riverdale” serves a modern-noir take on the Archie universe, this new potboiler transforms Nancy Drew into a hardened sleuth solving crimes in the not-so-sleepy town of Horseshoe Bay, Maine.

In the opening episodes Nancy (Kennedy McMann), has put away her detective aspirations to recover from her mother's death, and works at a local diner until she can resubmit her college applications. But a local socialite’s murder draws her back into the crime solving net — this time to save herself, since she’s one of the prime suspects in the case. What will surely scandalize parents more than other inkier themes is the fact that — clutch those pearls, America — Nancy has sex! For kicks! We’re all going to hell.

Lifetime takes a lot of ribbing for its films, but this Callie Khouri-directed biopic about the untold story of the friendship between Patsy Cline (played by Megan Hilty) and Loretta Lynn (Jessie Mueller) is a gloriously sweet dedication to female allegiance — and specifically this friendship between Loretta, a poor, undiscovered cold miner’s daughter, and one of country music’s biggest stars.

Where other successful performers might have done everything they could to keep a talented unknown from stealing their limelight, Patsy mentored Loretta, inviting her on tour and nurturing her talent until Patsy died in a plane crash at the age of 30. The true beauty comes after this tragedy and reveals that Loretta’s rise to the status First Lady of Country Music is very much a dedication to her friend Patsy’s legacy.

Embarking upon romantic relationships tends to result in a partial abandonment of friends. This is somewhat of a given. But what happens when a breakup forces a woman to renegotiate the dropped connections with the women she left behind? That’s the proposal of this fanciful new series starring Kat Dennings who, as Jules, gets a rude awakening after her longtime boyfriend dumps her that she has no network of women to catch and support her.

Series creator Jordan Weiss explained that the series is meant to be a romantic comedy, only here the objects of pursuit are platonic friendships as opposed to lovers. “The most important emotional relationships that I’ve had are with my female friends,” she said. “And, so, I wanted . . . that version of a love story that is between these platonic friendships, and so codependent sometimes, perfect sometimes, awful sometimes.”

Over the course of five years, filmmaker Waad al-Kateab fell in love with her husband Hamza, got married and gave birth to their daughter while filming in the Syrian city of Aleppo as it deteriorated under the Syrian conflict. The result is this intimate documentary and film festival star that is part diary, partly an exclusive report from the inside of a war zone where outside reporters are officially no longer allowed.

The heartbreak of al-Kateab's film is palpable, but to see the price mothers and children pay for being caught in the middle of these wars should remove all debate over what to do with people who leave their homes to seek safety and a fresh start in unfamiliar but safer lands.

Dark comedies are plentiful these days. Much rarer are dark comedies that begin in a downright bleak place that, even in moments that head into deeply grim territory, break you open with laughter.

Abby McEnany has created exactly that kind of show with “Work in Progress.”  Her eight-episode journey into the life of her fictionalized self-identified fat, queer dyke from Chicago immediately calls into question every moment of pitch black despair by turning it over to reveal at least some kind of light.

The loveliest turn in the pilot is a cameo by  Julia Sweeney, who not only gets to answer for a problematic “Saturday Night Live” character that made her famous (and McEnany’s life hell) but atone for it in a way that charms and heals in one deft pass. McEnany co-writes the series with her partner Tim Mason, along with Lily Wachowski, who also executive produces.